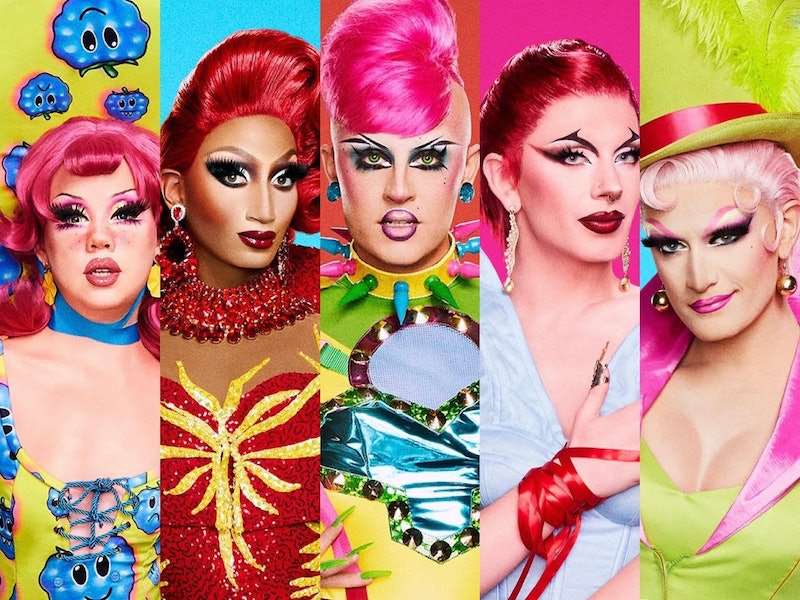 In most reality shows, when someone says something nasty to a castmate or makes fun of another contestant, a fight ensues. When it comes to RuPaul’s Drag Race, however, insults are part of the game. “Reading” others is part of the fabric of the show, and the best drag queens make sure the verbal jabs are frequent and cut deep. Usually, everyone’s in on the joke, so it’s all in good fun.

Here are the 50 best reads — including 17 shady ones from finalists Angeria, Bosco, Daya Betty, Lady Camden, and Willow Pill — from Season 14 of RuPaul’s Drag Race.

1. Angeria to Lady Camden in the Reading Challenge: “Lady Cameltoe. Next time you want to be masculine on the runway, leave the mustache at home. Your jawline is enough.”

2. DeJa Skye deciding who to play for Snatch Game: “Maybe I can save [Dance Mom’s] Abby Lee for All Stars..” / Angeria: “...because you’re definitely gonna have to come back.”

5. Bosco to everyone in the Reading Challenge: “And finally, I was walking around backstage and I actually found RuPaul’s will. You have some really weird criteria in there. She wanted to be buried on the catwalk, and she wanted all of you to be her pallbearers. That way you can let her down on the runway one last time.”

7. Daya to Jasmine Kennedie, who came out as trans on the show, during an Untucked episode: “I have been honest, b*tch. That’s your body, whatever. But I wasn’t shading you on that. I was just shading you because your outfit was bad.”

8. Daya Betty after Jorgeous won the Design Challenge: “I am very proud of you Jorgeous. That is the sexiest napkin I’ve ever seen you in.”

12. Lady Camden: “The Muppets are here! A bunch of ugly monsters that only come to life when there’s a hand up their ass.”

15. Willow Pill about Daya’s jokes: “Daya’s taking so long to get to every punchline. It’s like, not only was it not funny, but you wasted my time.”

16. Willow Pill about Jorgeous during the mini challage with giant paintbrushes: “Jorgeous with this ginormous brush looks like a little hamster in a cartoon…”

17. Willow Pill about Jorgeous while deciding the roast order: “It’s a little shady, but I would like to go after Jorgeous because I feel the least confident in her set. But she could blow us away, I have no idea. I mean, we’ll see, uh, mmm, well, I don’t know.”

The Best Reads From Eliminated Queens

18. Kornbread: “So what kind of drag do you do? Are you a performer? Dancer?”/ Alyssa Hunter: “I do everything. I’m a versatile queen.” / Kornbread: “Let me tell you. When people be like, they like to do everything, they cut to them not doing everything.”

19. Jorgeous: “My first impression of Maddy is very … I want to see what else you got.”

22. Kerri in the Reading Challenge: “Miss Jasmine Mouth Almighty. You know, I am so glad that on this journey, you have found…your silence.”

24. Jorgeous in the Reading Challenge: “Jasmine Kennedie. Why do you look so old, but you are so young? You are the definition of white do crack.”

25. DeJa in the Reading Challenge: “Kerri Colby, what can I say that RuPaul hasn’t already hasn’t to you? Condragulations you’re the winner of this week’s challenge.”

27. Jasmine about Daya’s Design Challenge looks: “Honestly, Daya is upset because she hasn’t won anything yet .But girl, you weren’t in the top for that challenge because shit was wrinkled and it looked ugly. Period.”

28. Jasmine: “When Jorgeous starts singing, it is like nails on a chalkboard. All tea.”

29. Jasmine: “Oh my god, Jorgeous is a chihuahua yapping at someone’s ankles.”

31. DeJa while moderating the panel during the DragCon Panels Challenge: “Now we’re going to be talking about the good, the bad, and the ugly. Speaking of ugly, do you want to meet our panelists?”

32. Jasmine: “I feel so pretty. Like I genuinely feel pretty.” / Daya: “A drag queen’s best feature is delusion.”

33. DeJa: “I don’t know what’s going on, but all the girls are struggling right now. I feel like I’m doing great, but I haven’t laughed once, and this is weird because this is such a strong group of girls. There are very few jokes coming out. Like, there’s no funny.”

34. Jasmine: “The fact that this is this week’s episode just gives me more confidence in the fact that you saved me for a reason.” / Daya: “Eye roll. Eye roll. Eyes rolling in the back of my head. Jasmine has been in the bottom three times now. I have yet to see anything that Jasmine can do fantastically other than lip syncing when she’s in the bottom.”

35. Daya Betty: “Despite Lady [Camden] looking like the female gremlin on stage, I think this is the most attracted to her I have ever been.”

The Best Reads From The Judges & More

36. Carson Kressley to Jasmine about her DragCon Panels Challenge performance: “I know you’re a Kennedie, but in your panel, you were giving me Nancy Reagan as a magician vibes.”

37. RuPaul during the Snatch Game: “As Trinity the Tuck said, ‘Where are the jokes?!’”

38. RuPaul to Jasmine about former Drag Race contestant and fan-favorite Alyssa Edwards: “I would keep an eye out for Alyssa Edwards in some dark alleyway. She’s gonna be coming for you, because you look like a younger version of her. Did I just say that?”

39. Ross Mathews: “When DeJa was rapping, I was thinking to myself, ‘She could win this whole week,’ and then she comes out in that on the runway and I thought, ‘Well, she foiled that plan.’”

More like this
Andy Cohen Apologized To Larsa Pippen After A 'RHOM' Season 5 Reunion Dust-Up
By Brad Witter
10 Photos Of The Wildest Limo Arrivals From 'The Bachelor' Premiere
By Brad Witter
Bachelor Zach’s “Dream Job” Has Nothing To Do With His Work In The Tech Industry
By Brad Witter
Turns Out George Clooney Is A Huge Fan Of This Classic British Game Show
By El Hunt
Get Even More From Bustle — Sign Up For The Newsletter
From hair trends to relationship advice, our daily newsletter has everything you need to sound like a person who’s on TikTok, even if you aren’t.