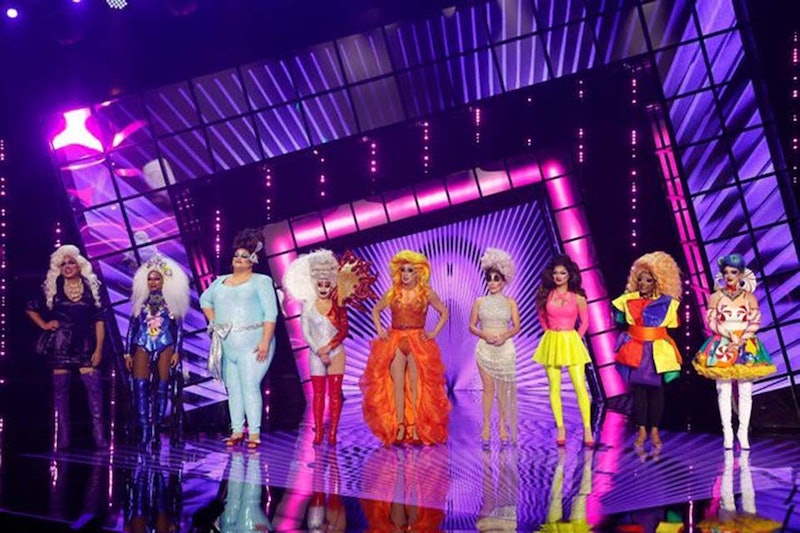 A new group of nine stars were tucked, plucked, and ready to lip sync for their lives in RuPaul’s Secret Celebrity Drag Race Season 2. The VH1 reality show’s second outing adopted a new format similar to The Masked Singer, keeping the celebrities’ identities secret until a new queen was eliminated each week. “We are keeping our contestant’s identities a secret so you can stay laser-focused on their charisma, uniqueness, nerve, and talent,” RuPaul explained in the Aug. 12 premiere. (That was until Week 6, anyway, when a new twist required all the remaining competitors to prematurely reveal their true identities.)

The nine since-unmasked celebrities underwent a “wig to heel transformation,” performing in a lip sync extravaganza in each episode. After each round, the bottom two contestants had to lip sync for their lives in front of judges Michele Visage, Carson Kressley, Ross Mathews, and, of course, Mama Ru. The last queen standing won $100,000 for a charity of their choosing, along with the title of “America’s Next Celeb Drag Superstar.”

During the Sept. 30 season finale, the secret celeb who eventually sashayed away with the grand prize was none other than the Backstreet Boys’ AJ McLean, aka Poppy Love. “I’m so honored to have been crowned the Next Celebrity Superstar,” the Season 2 winner posted on Instagram after the episode aired. “Thank you for the most incredible experience ... I had the best time as Poppy Love!”

Now that the competition has played out, here are all the stars that Celeb Drag Race revealed.

The first celebrity to be eliminated, Fabulosity, revealed herself as Emmy winner Loretta DeVine. “I’ve had a very interesting career. I never thought I’d be in a drag competition, but I’m at an age now where I want to do whatever the hell I want!” she said of the “exciting and new” experience before performing a rendition of Mary J. Blige’s “Just Fine” and promising to “shock the hell out of everybody.” After landing in the bottom two and coming up short with her lip sync to Bananarama’s “Venus,” Fabulosity had to sashay away from the competition.

“I’m an entertainer; I’ve done it for many, many years but to perform in drag? That’s completely daunting,” Electra said before her premiere rendition of Pink’s “Raise Your Glass” in the premiere. For her second performance of the season, she chose Donna Summer’s ’70s disco classic “Last Dance,” but the judges thought she was holding back. Though Electra was one of the more perplexing celebrities — with some guesses on Twitter ranging from Julie Bowen to a Real Housewife — the majority put their money on ’80s musician Taylor Dayne. Their bets paid off at the end of Episode 2 when Electra was eliminated and the “Tell It to My Heart” singer revealed her true identity.

One of the more difficult celebs to guess, Jackie Would first performed “Juice” by Lizzo, describing her drag persona as mixing “a little bit of class and a lot of sass.” Further explaining that he’s “super passionate” about what he does, the secret star hinted, “Professionally, I’m an expert in my field.” Though many have guessed that Jackie might be someone from Queer Eye, including Tan France, the more predominant theory was that she is Kressley’s former co-star, interior designer Thom Filicia. After her elimination in Episode 3, Jackie did, indeed, RuVeal herself to be the OG Queer Eye for the Straight Guy star. “You’re one of my favorite men in the entire world, and now you’re one of my favorite women too!” Kressley joked after Filicia’s final Celeb Drag Race performance.

Before her debut lip sync to Ava Max’s “Sweet But Psycho,” Milli Von Sunshine noted that her background is in entertaining and performing. “Drag is just this other art form and this other identity that you step into,” she said, calling her participation a “new discovery” that she hopes will bring “some happy, positive energy into this world.” After Episode 1, viewers embraced the theory that Milli is Glee alum Jenna Ushkowitz, and upon her elimination three weeks later, they were proven right. “Drag has taught me to love and be proud of all the vulnerable, scary and weird parts of myself and it was a true honor,” Ushkowitz tweeted on Sept. 3 after she came up short while lip syncing for her life to Kelly Clarkson’s “My Life Would Suck Without You” — a song she previously performed on Glee in 2009.

Among the clues about Poppy Love’s celebrity identity is that he’s a “straight man” who lives to be on stage, aka his “happy place.” He added, “I’m doing this because I’m a huge advocate for the LGBTQ+ community. I’m really in touch with my masculine side and my feminine side. I’d love this opportunity to really go all in.” After a performance of “You Oughta Know” by Alanis Morissette, Poppy Love was named Week 1’s winner. On Twitter, fans seemed convinced that Poppy Love is Backstreet Boy AJ McLean because of his “distinctive” voice and matching tattoos — and they were certainly right about the Season 2 winner.

“People have always known who I am. I can’t hide, so assuming a new identity is really exciting for me,” the mystery star hinted during the premiere, explaining that she’s been performing since she was “a little girl.” Also claiming that she’s been watching Drag Race “forever” and “grew up listening to RuPaul’s songs,” Chakra 7 first lip-synced to Chaka Khan’s “I’m Every Woman.” After the performance, several fans correctly guessed that she was The Fresh Prince of Bel-Air alum Tatyana Ali. During the Sept. 30 Season 2 finale, she was not only named a runner-up, but her fellow queens’ votes earned her the Miss Congeniality title.

This since-revealed star, who first performed Nicki Minaj’s “Super Bass,” has been in show business for 20 years and wanted to try something different. “I’ve grappled with femininity as an issue a lot. Now I want to be able to get up there and celebrate all that,” he said, adding that he once “remained in the closet” but is “done with all that” now. Most Twitter users correctly guessed that Donna Bellissima is Daniel Franzese, aka Damian from Mean Girls.

The first biggest clue about Thirsty Von Trap’s identity was that the star portraying her was a child actor who grew up on television. “I’m a huge fan of the art of drag, and there’s a sense of confidence that I don’t necessarily know that I possess,” he explained, adding that joining Drag Race was an “exercise in self-confidence.” After Thirsty wowed the judges with a lip sync to The Pussycat Dolls’ “Don’t Cha,” several viewers put the pieces together, suggesting that she was really Ugly Betty’s Mark Indelicato. Indeed, Indelicato eventually joined Ali as a Season 2 runner-up.

“I feel best when I’m on stage performing in front of an arena or a theater full of people,” this secret celeb — who first performed an impressive rendition of Ciara’s “Goodies” — explained in the premiere, adding that he “came from music” and “was on a television show.” On Twitter, though, he didn’t seem to be fooling many viewers, who were convinced — and later proven right — that Chic-Li-Fay is Kevin McHale from Glee.

This article was originally published on Aug. 19, 2022