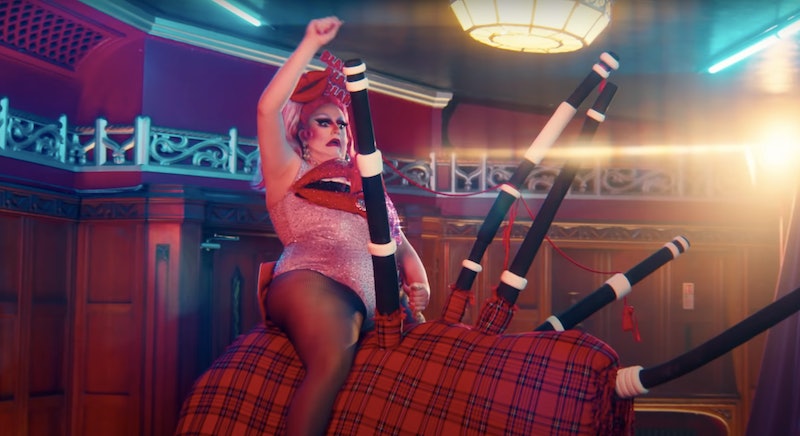 There’s no doubt that the nation needs a bit of cheering up right now, so, it’s time to rev up those engines because RuPaul's Drag Race UK is headed back onto TV screens this January. At the end of last year, fans were blessed with 12 brand spanking new British queens revealed in cute videos introducing them, their styles, and what they will be bringing to the competition. And now, in the latest trailer for Drag Race UK season two, some new nuggets of info might have been revealed about the show.

Hosted by drag royalty RuPaul, Drag Race presents the crème de la crème of drag artists fighting it out to be crowned the country's next Drag Superstar. Season two of Drag Race UK is set to return on BBC iPlayer on January 14 at 7 p.m.

The new one minute trailer shows us a little more personality from each of the contestants and a peek at a second (and the occasional third) fashion look for the queens. Although British queens often get pigeon holed for not being as "polished" as the queens from across the pond (although they're always funnier, if you ask me), this trailer begs to differ.

Set in a dressing room, with mama Ru appearing on TV screens and monitors throughout, the trailer is completely chaotic and completely camp. There are queens on horses, goats on leads, a pack of puppies, Scottish Queen Lawrence riding some bagpipes, and we’re completely here for all the mayhem. While not all the queens got the same amount of airtime, the message for this season is clear: “love yourself.”

This year’s roster includes queens from across the UK including London queen Tia Kofi with a 15k following, Ginny Lemon, who looks like she stepped right out of a '90s kids show, and comedy queen Sister Sister. As always, there will be star-studded special guests including model Jourdan Dunn, comedian and TV darling Dawn French, and Love of Huns legend Natalie Cassidy aka Eastenders’ Sonya.

More like this
'MAFS UK' Changed The Rules After Matt & Whitney Cheated On Their Partners
By Catharina Cheung
What Exactly Is The Bish & Chips Show?
By Frances Stewart
How To Get Tickets To 'Strictly Come Dancing's Live Tour
By Sophie McEvoy
'Survivor' Is Finally Coming Back To UK Screens
By El Hunt
Get The Very Best Of Bustle/UK