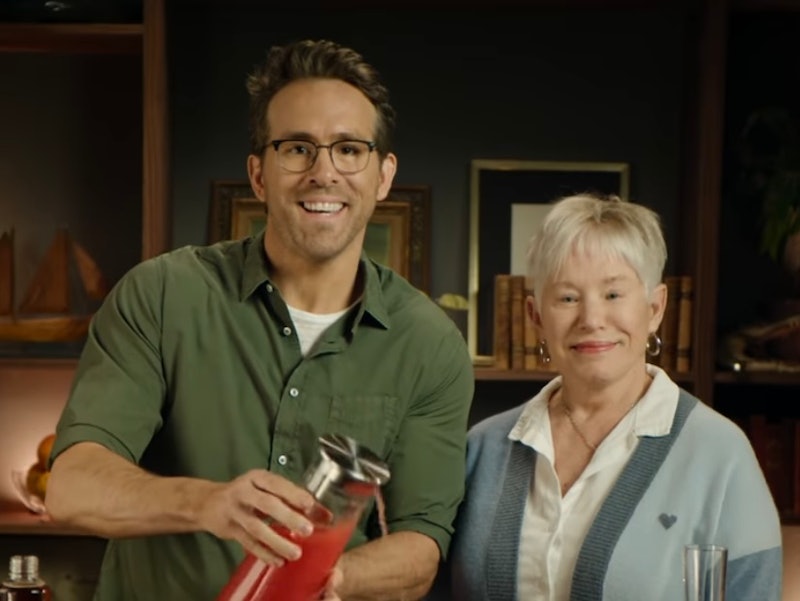 Ryan Reynolds/YouTube/screenshot
By Brad Witter
May 7, 2022

In honor of Mother’s Day 2022, Ryan Reynolds’ mom, Tammy, joined him for an Aviation Gin cocktail tutorial video — and, yes, she had plenty of unsolicited advice to add. Before mixing up some of his Mother’s Ruin Punch, the Deadpool actor began on an earnest note, explaining that May is that time of year to “recognize our moms for all the love and support they show us.” Mrs. Reynolds even added an “I’m so proud of you, honey,” for good measure.

But that’s when things hilariously went left in the playful advertisement. As the well-meaning family matriarch corrected her son on everything from the direction he should stir his spoon to his lemon juice to vermouth ratio, Reynolds’ direct stare into the camera went from mildly unamused to fully annoyed. He (mostly) kept his composure, though, as he finished mixing the cocktail, adding, “As this chills for an hour, you’ll want to spend that time reflecting on everything your mom has done for you over the years.”

After his mom criticized his lack of coasters, however, Reynolds lost his patience and changed course, giving viewers permission to “just add champagne while it’s warm and drink the ever-loving sh*t out of it.” Adding insult to injury, Tammy assured her “sweetheart” son that they could “fix” his performance in post-production editing. “Fix you in post,” he muttered under his breath. It was all in good fun, though, as the mother-son duo broke character and shared a laugh soon afterward.

Sharing the same video to Instagram, Reynolds joked in his caption, “Wouldn’t trade her for all the @AviationGin in the world… probably.” Not to be outdone, his longtime friend Hugh Jackman commented, “Happy Mother’s Day Tammy! You should get a special honor for raising that one. I’m just saying.”

Though Reynolds has yet to share his Mother’s Day tribute for wife Blake Lively, with whom he shares children daughters James, 7, Inez, 5, and Betty, 2, his message is sure to be similarly filled with playful sarcasm. After all, the couple rarely misses an opportunity to troll one another on social media. In 2021, for example, he shared some sweet words on Instagram, before joking, “Never could I have predicted anonymous airport bathroom sex would lead to this. Or how you’d hire Dog The Bounty Hunter to find me.”

In reality, “Blake runs the show” in their house, as Reynolds explained to David Letterman in the My Next Guest Needs No Introduction Season 4 teaser, which Netflix dropped on May 6. “I would kind of really phone things in if it wasn’t for her. [She has] higher standards.” Especially with three daughters, he added, “that division of labor is very important.”