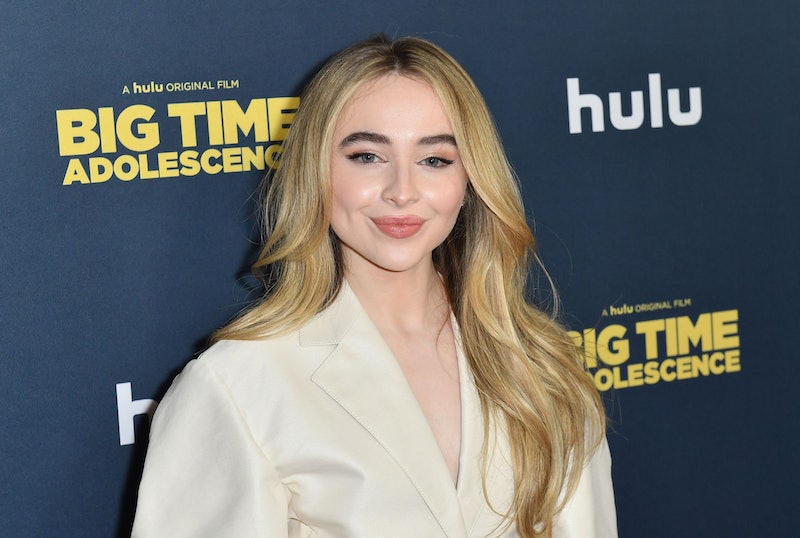 They may not have confirmed whether or not they're in a relationship, but these two Disney Channel stars clearly make beautiful music together. During a recent interview with Radio.com, Sabrina Carpenter teased her upcoming collaboration with rumored boyfriend Joshua Bassett, a song titled "We Both Know" that is set to appear on Bassett's debut EP.

Though the 21-year-old was hesitant to share too many details about the song, she did reveal that they recorded it "a while ago" and that she is excited for fans to hear "We Both Know" when the EP releases on March 12. "I can't say too much, and it's on his project so I'm like, I don't want to say too much that I can't say," Carpenter explained, adding that fans will "have to see" when Bassett is ready to release the track. "But it's a collaboration very dear to my heart that I'm very excited about."

In January, Bassett told Febre Teen that he reached out to Carpenter to collaborate on "We Both Know" shortly after he first wrote the song. "I sent her a quick message and was like, 'Hey, I think you're really awesome, and I have this song I think you would sound great on; let me know what you think,'" the High School Musical: The Musical: The Series star recalled. "And she responded like 10 minutes later, gave me her number, and I sent her the song. Fortunately, she liked it, so we got together in the studio, and it was just a blast to make."

The pair's musical collaboration will come on the heels of a rumored love triangle involving Bassett's HSM:TM:TS co-star (and rumored ex-girlfriend) Olivia Rodrigo. In early January, Rodrigo released her debut single, "Drivers License," which is reportedly inspired by her split from Bassett; shortly after that rumored breakup, Bassett and Carpenter began spending time together and fans began speculating that they are now a couple.

"And you're probably with that blonde girl / Who always made me doubt," Rodrigo sings in "Drivers License," which many fans interpreted as a reference to Carpenter. "She's so much older than me / She's everything I'm insecure about." On Jan. 22, Carpenter released "Skin," which many fans saw as a response to Rodrigo's song and the lyric about the "blonde girl" that her ex is now spending time with: "Maybe you didn't mean it / Maybe 'blonde' was the only rhyme," the Girl Meets World alum sings in the first verse of her song.

Though Carpenter didn't confirm that the song was a response to "Drivers License," she wrote on Instagram that "some lines [in 'Skin'] address a specific situation," although other experiences were also the inspiration for her new single. "I wasn't bothered by a few lines in a (magnificent) song and wrote a diss track about it," she wrote. "I was at a tipping point in my life for countless reasons. so I was inspired to do what I usually do to cope, write something that I wish I could have told myself in the past."

During her conversation with Radio.com, Carpenter opened up about why she decided to include the "blonde" line in "Skin," explaining that she felt the song was never meant to be a dig at Rodrigo — or any one person in particular. "At the end of the day, the more I dance around the subject, the less people kind of understand where I’m coming from. ... Fact is, exactly what I said, it wasn’t a call out to one person," Carpenter said. "That situation is a situation, and plenty of other things have happened in this past year alone in my life that I was like, ‘It’s getting to be a lot,’ and I need to compile these thoughts into one place."