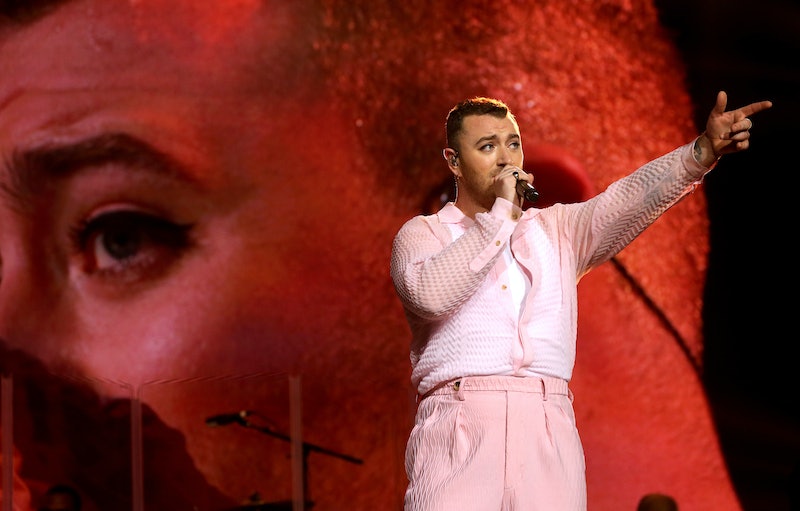 Have you been counting the days since the last Sam Smith album? I wouldn't blame you if it did. Good news, Sam Smith's new album Love Goes is en route for October. The new album follows the release of upbeat new single "Diamonds" and is already being billed as Smith's most "experimental" yet.

Taking to Instagram, Smith announced the news in two posts saying they were "overjoyed" to confirm the release of their third album. "I'm extremely happy and overjoyed to announce my third album (I can't believe I'm saying that) ‘Love Goes’. This album marks a time of experimentation and self-discovery in my life."

The singer revealed the pending album took two years to write and the process has been "one hell of a ride."

"I wrote this from the age of 26-28 and it’s been one hell of a ride. I hope the people who listen to it enjoy it and love it like I have..." the caption read.

Smith also revealed the album artwork, which pictures Smith lying on the grass, their head resting on their hands with eyes closed, looking somewhat pensive and peaceful, showing off a tattoo on their arm of a couple kissing. It's giving us strong end-of-summer romance vibes and I'm here for it.

The rest of the LoveGoes artwork features illustrations of colourful flowers for a romantic botanical feel. In a previous Instagram post, Smith explained that the flowers symbolise the uniqueness of each of the songs on the album.

In a letter, they wrote: "Listen to these songs with an open heart, treat each song like a flower from the garden and have fun with them." Smith added, "I tried not to take myself too seriously when writing a few of these songs and I hope they make you smile, because they made and make me smile."

As we can gather from the title, the Love Goes album will feature some musical retelling of love and romance. While we know Smith can sing a serious ballad, we're hoping for some happy love songs, too. The singer was spotted in a very sweet embrace with their new beau – interior designer Francois Rossi – recently.

Smith's last album, The Thrill Of It All, was released in 2017 and had phenomenal success, giving the singer their second number one album.