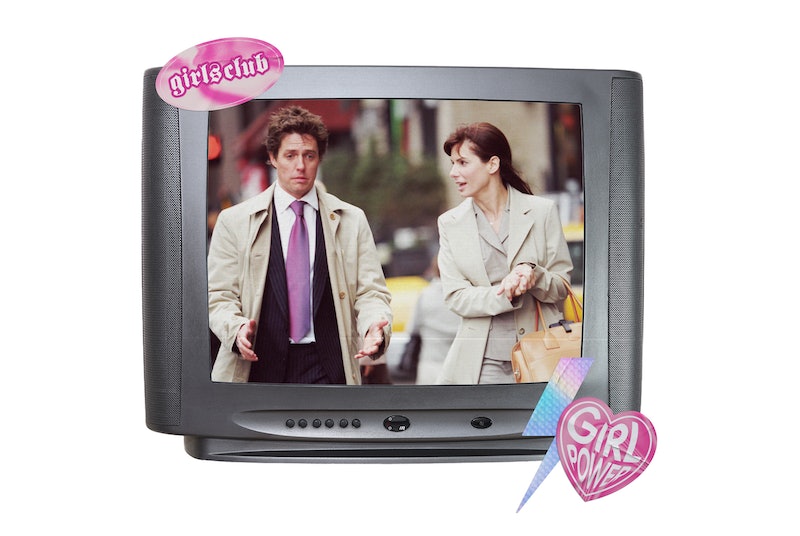 There's a moment in the 2002 film Two Weeks Notice that is so auspicious it seems like it's predicting the future. Ambitious, brassy, principled general counsel Lucy Kelson (Sandra Bullock) has reached a breaking point in negotiating her work-life balance with her sexy billionaire boss George Wade (Hugh Grant), who has just pulled her out of her best friend's wedding to help him pick out a suit to judge a pageant. She’s frustrated with George, but when pressed by him, she doesn’t let herself — and her own workaholic tendencies — off the hook.

“If you don’t want to be disturbed, why do you keep your phone on? Because you like emergencies. You crave the excitement,” George says.

“You’re right, George, this has nothing to do with you,” Bullock’s Lucy replies. “This is entirely my thing, because I’ve managed to turn myself into this — this… There’s not even a name for it!”

While there wasn’t a name for it back in 2002, we now know exactly what Lucy is: a girlboss. True to the moniker’s connotation with curdled optimism, Lucy is a Harvard-educated lawyer and activist so hell-bent on historic and environmental preservation that she agrees to work for a billionaire if he promises to save her beloved community center from demolition. What could possibly go wrong?

Since Two Weeks Notice is a rom-com, the only things that do are ones that allow for hijinks and meet-cutes. But Lucy’s embodiment of the well-intentioned yet self-absorbed girlboss archetype more than a decade before the term was brought to the mainstream by Nasty Gal founder Sophia Amoruso in 2014 is both foreboding and, let’s be honest, pretty amusing.

If you really think about it, Bullock has been playing girlbosses long before Nasty Gal was even an eBay shop. In 1995 she starred in The Net as a systems analyst (a woman in tech!) who learned what Elizabeth Holmes would discover over a decade later: that Silicon Valley is a place where everyone is trying to steal your secrets and men who look like Dennis Miller are your only friend. Premonition is a film where Bullock’s character starts experiencing days out of order — a metaphor for the mind-scrambling task of scheduling eight hours of meetings on Microsoft Outlook? In Our Brand Is Crisis, she plays a political strategist hired to influence the outcome of a Bolivian election. (HRC? AOC? RBG? The only thing more girlboss than going by your initials is getting into politics itself.)

Bullock has also used her art to warn a nation that having it all has consequences. In Practical Magic, her character owns a successful store and finds the love of her life… until he’s killed due to a curse on the women in her family. The eventual backlash against the girlboss was just as swift. Just take Miki Agrawal — who coined the girlboss synonym, “She-EO” — who fell from the top of Thinx, the period-underwear empire she created. Or Steph Korey, who founded millennial-friendly luggage company Away, and was the subject of a Watergate-level investigation of its toxic work environment by The Verge. Even Audrey Gelman stepped down as founder of her pastel-coated feminist coworking space The Wing, and has now been banished to Brooklyn, where she’s selling soap in the shape of grapes.

Girlbossing might no longer be en vogue, but Bullock’s She-EO influence is eternal. Her character in The Proposal — the editor-in-chief of a New York book publishing house — convinced a generation of young women that there was actually money in publishing. Her role as an FBI agent undercover as a beauty pageant contestant in Miss Congeniality taught audiences that women could have beauty and brains! And just two weeks after the release of her ultimate girlboss film, Two Weeks Notice, LinkedIn — a website for career development and professional networking — was founded. Coincidence? We think not.

More like this
The 'Hocus Pocus' Sequel Finally Has A Release Date & It Makes Total Sense
By Shannon Barbour and Radhika Menon
'Dirty Dancing's Jennifer Grey Wants Harry Styles To Be The Sequel’s Love Interest
By Grace Wehniainen
Hayden Panettiere Will Return For 'Scream 6': "We F*cking Won, Scream Fam"
By Jack Irvin and Jake Viswanath
Amanda Seyfried Reflects On 'Mean Girls' & "Gross" Remarks That Men Made After It
By Jake Viswanath
Get Even More From Bustle — Sign Up For The Newsletter