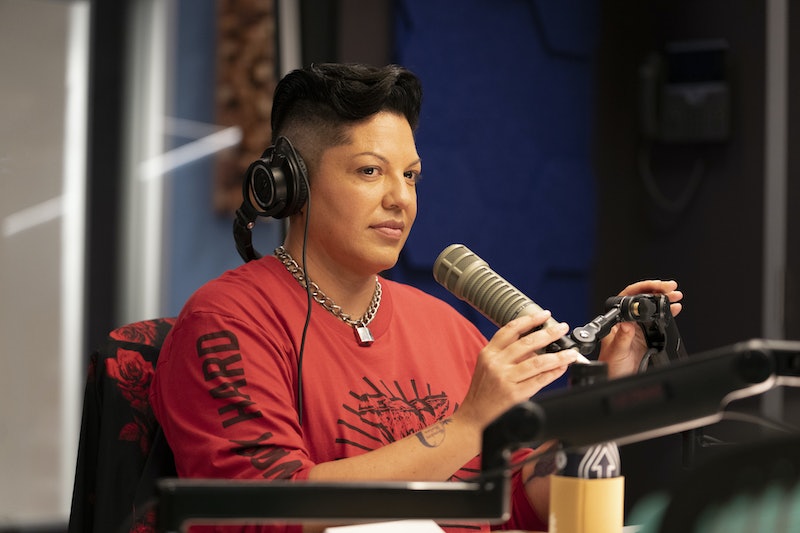 Sara Ramirez was living in Manhattan and studying drama at Juilliard when Sex and the City premiered on HBO in 1998. “When the show started, I watched and I was definitely a fan,” Ramirez says. It seemed like everyone was. And for a generation of aspiring actors grinding in New York City, it was fantasy casting. “I dreamt that maybe one day I could guest star on the show or I — I don't know — I’d play a purse, a tree. It didn't matter. I just wanted to be in this fabulous show that made me fall deeper in love with New York City,” they remember. So when And Just Like That… creator Michael Patrick King offered Ramirez a role on his SATC revival two decades later, they jumped at the chance to collaborate on a character whose story would be infused with their own experience.

Ramirez plays Che (truncated from Cheryl, but pronounced like Che Guevara), Carrie’s boss and co-host on a sex advice podcast, who self-describes as a “queer nonbinary Mexican-Irish diva.” If you know anything about the Grey’s Anatomy star’s own biography, the similarities stand out. Ramirez, who moved to the US from Mexico when they were eight, came out as bisexual in 2016 — when they were still playing Dr. Callie Torres on Grey’s — and later came out as nonbinary in 2020. “There are things that we have in common, including our love for New York City,” Ramirez says, though Che wears their love on their sleeve, in the form of an Empire State Building arm tattoo.

Che is also a stand-up comic, an aspect of the role that initially intimidated Ramirez, who had never tried comedy before filming. So King wrote Che’s set in the most recent episode with an eye towards Ramirez’s own experience, weaving it into the script. In front of a packed Webster Hall crowd, Che spills about the nervous jitters they felt before coming out to their family, the hours they spent anticipating their families’ fumbling questions, and how their mind ran through all the possible outcomes so that they would be prepared for any and all reactions. Except, of course, for the one they — and Ramirez, too — actually got.

“The story goes that I set aside a million hours to talk to my family, and I pressed pause on whatever movie they were watching,” Ramirez remembers smiling, anticipating their own punchline. “And I said, ‘Hi, just so you all know, I'm just coming out to you now, this is who I am. These are my identities.’ And they just kind of looked at me for two seconds and said, ‘Oh, that's great. That's nice. Can we keep watching now? Can you move, you're in the way? Can we press play?’” Ramirez, like Che, appreciates their family’s acceptance, though they acknowledge that their story is not universal, and likely not even the norm. But that’s part of what attracted Ramirez to playing Che in the first place — it was an opportunity to play a nonbinary character that felt specific and real.

“This is a multidimensional human character. Nonbinary people are not a monolith. There is no one way to be queer,” Ramirez says in another echo of something Che says to their fans at Webster Hall. “Michael Patrick King was interested in the nuances and the humanity, the messiness, but also in crafting a character who's very confident. I knew that that was going to be a really interesting aspect to play. This person's way more confident than I am.”

But for Ramirez to play that confidence, they needed to know the writing was as close to impeccable as possible. “I wanted to make sure that this representation wasn't going to be harming queer and trans people, and I don't know everything,” they say. “And I know that, and I'm okay with that.” Beyond Ramirez’s personal experience, there was also queer representation among the writers. King invited Nick Adams, GLAAD’s Director of Transgender Representation, to weigh in on Che’s set. There were rewrites coming in even on the morning the scene was shot, which happened to be Ramirez’s first day filming.

What the team came up with is grounded in Ramirez’s personal story, but nuanced to fit Che, who isn’t a carbon copy of Ramirez, because, like Che says, there’s no one way to be nonbinary. And while SATC pushed certain boundaries when it aired in the late ‘90s, this is new terrain for a show that’s been criticized for its lack of diversity. “I'm very, very curious to see how they're going to meet this moment and to hear what the fans think,” says Ramirez. Of course, “fans” includes them, and they like what they’ve seen for their own character’s arc. “This is representation of progress, not perfection. If we're moving in the right direction, that's important to celebrate.”