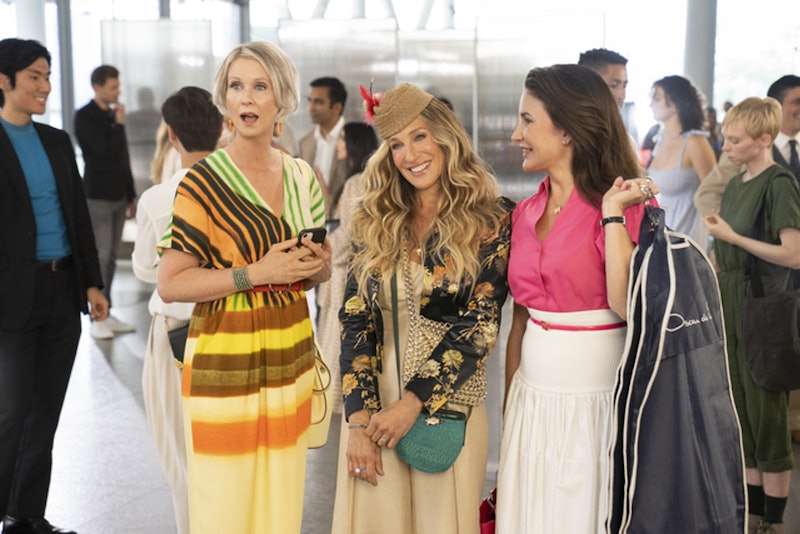 The fab foursome is short one woman, and fans clearly missed Samantha Jones. (Kim Cattrall, who played the iconic PR exec, passed on the reboot.) Viewers suffered second-hand embarrassment from the white performative wokeness of Miranda Hobbes (Cynthia Nixon). And others were devastated by Big’s sudden death after spending exactly six seasons and two movies trying to understand what Carrie Bradshaw (Sarah Jessica Parker) ever saw in him.

Before the show’s premiere, casting news made headlines, and so did paparazzi photos that showed notorious returning characters, including Big’s ex-wife, Natasha (Bridget Moynahan). The constant updates inspired fans to consider how and why each character could return, but with eight more episodes to go, there are still so many unknowns.

Here are the best And Just Like That... theories about what might happen next, including how Natasha comes back into the fold and whether Samantha will eventually show up.

Does Charlotte End Up In The Hospital?

Out of the many leaked photos from set, the ones with Nixon and Bradshaw at a hospital raised suspicion — even more so following Big’s death. What are they doing there? Who is hospitalized? What’s in the giant duffel bag? Why is Carrie wearing Birkenstocks with socks? We can only assume the latter is because of an emergency, right? Did Carrie finally learn to call 911? After everything that’s happened, is the show burdening someone else with a serious health condition?

Since this scene seems to only include the two mainstays in the waiting area, there are a few options: It could be Steve or the pubescent Brady who’s in trouble, and Carrie could be there merely as emotional support. Or it could be either of them, waiting to be seen by a medical professional. Or it could be Charlotte. Why her supportive husband, Harry, and daughters wouldn’t be there is unclear, but wouldn’t it be just like Charlotte to be embarrassed by a health condition and hide it from her family? In any case, it looks like the person needing medical attention is someone they both care about.

How Will The Show Handle Willie Garson’s Death?

Willie Garson, who played fan-favorite Stanford Blatch, passed away on Sept. 22, in the middle of filming. Since then, fans have wondered how his death will be addressed on the show, especially after finding out the show’s writers killed off another major character. As per The Hollywood Reporter, writer Rachna Fruchbom said the show “had to shift a little bit” following his death.

It’s unclear if Stanford will also pass away in the show, something that might be too much for fans to bear. That said, writer Samantha Irby told THR that “[director and showrunner Michael Patrick King] figured it out in a very beautiful way,” adding, “It’s not treacly, which we’re all allergic to. We don’t want anything super sweet.”

We all collectively screamed when Carrie didn’t bother to dial 911 as Big died in her arms. We also witnessed his understated funeral where *checks notes* Charlotte and Gloria, Big’s secretary, break down. But none of that explains how the paparazzi caught Chris Noth filming what seems to be multiple scenes or why he’s listed on IMDB as appearing in all 10 episodes of the new series.

There are a few theories. Maybe Big isn’t really dead and faked it for tax purposes, to date his Peloton instructor, or whatever reason. It could be why Carrie barely cried and wrote that lackluster eulogy. More realistically, though, his death could be so depressing for Carrie that her only coping mechanism is dreaming up Big’s spectral self throughout the rest of the series. Another viable option: He is dead but will appear in flashbacks.

One of the pap photos that circulated ahead of Big’s shocking demise was one of Carrie throwing ashes over a Parisian bridge — the same one where she and Big dramatically reunited during the SATC finale. But in a different photo, Big is right beside her. And Just Like That... isn’t the frothy comedy SATC once was, but could it really plunge into a different genre and bring Big back as part of the literal undead?

The likely answer is that Noth duped us. At a press junket Bustle attended, director and showrunner King revealed he made Noth shoot a scene with Parker to throw the paparazzi off. “I wrote a fake scene, so he and Sarah Jessica [Parker] put on costumes,” King said, adding, “I really wanted the audience to be as surprised as possible before we did it.” (HBO is especially notorious for the strategy, having employed the same tactic to avoid spoilers with Game of Thrones.) King also said it was just one of the “red herrings” they “threw into the mix.” Still, it’s unclear exactly how many of these paparazzi moments are fake-outs.

Did Samantha Really Send Those Flowers?

And Just Like That... did Samantha dirty in the first episode. But after talking about how she saw Carrie — whose entire net worth at one point was her shoe collection — as an ATM and making a snarky remark about her age, it seems the writers are leaving Samantha’s storyline open in case Cattrall decides to return. In Episode 2, Samantha surprised Carrie with a casket spray at Big’s funeral, though she suspiciously still left Carrie on read.

While it was definitely a sweet moment that proved Samantha will always be there when it matters most, some fans are doubtful and have different theories about who else might’ve sent those flowers. One Reddit user thinks it could be Charlotte or Miranda posing as Sam to make Carrie feel better. “That floral arrangement did seem very Charlotte,” another Redditor concurred. Others think the flowers could be from Natasha, though she was a no-show at the event. A wilder theory comes from one Twitter user who thinks they could be from Aidan, Carrie’s ex.

Is Natasha Coming For Carrie And Her Assets?

Remember Natasha, Big’s ex-wife who lost a husband and part of a tooth to one Ms. Carrie Bradshaw? Paparazzi photos of Moynahan reprising her role, including a lunch scene with Parker’s Carrie, got fans buzzing. What business does Natasha have with Carrie? Why did she skip Big’s funeral only to have a sit-down with the widow later on? Though Natasha hasn’t appeared yet, her arrival feels ominous.

It seems like Gloria is key to Natasha’s significance. During Episode 2, Gloria delivers a foreboding message to Carrie: The two of them have “papers” to discuss. All signs are pointing to trouble with Big’s will.

Perhaps Natasha will finally make her debut as Big’s will is read, and maybe she stands to benefit from it in a significant way. Big also could’ve been consistently paying her alimony, especially if they had an infidelity clause in their prenup. Even worse, there’s a slight chance Big carried out an affair with Natasha, as he did when he was married to her. Natasha’s appearance could expose everything. We’ll just have to wait and see if there are any redeeming qualities with this man or if he’ll remain a prick, even in eternal repose.

What Does Gloria Know?

Does Gloria’s arrival indicate that a big *wink* mess is underway? According to IMDB, actor Brenda Vaccaro is in nine out of the 10 episodes, so expect to see more of this new character and the drama she and her “papers” will bring. Some fans even guess that instead of Natasha, maybe it’s Gloria who is romantically involved with Big. Whatever it is, brace yourselves.

Does Miranda Have A Drinking Problem?

In the first two episodes alone, Miranda is either nursing a drink or patiently waiting for the bar to open at 11 in the morning so she can. She even brought a bottle of wine to Lily’s piano recital. Granted, she was about to read a eulogy, but Miranda also needed a drink at the wake. Miranda could very well be going through something, and these seemingly small, innocuous moments have built up and might point to a serious problem, as Redditors have theorized.

Does Miranda Have Sexual Tension With Che?

Even before the premiere, fans guessed Miranda would undergo a sexual awakening in the reboot. After her first interaction with Sara Ramírez’s Che, Carrie’s new boss and podcast co-host, viewers think there might be a connection there. Twitter user HermitTVJunkie even joked about Miranda’s wardrobe being a hint, writing, “Nothing about Miranda's swag was ever hetero.” If Miranda does explore her sexuality or come out at some point, let’s just hope the show handles it better than her strange woke storyline.

Will Carrie And Aidan Date Again?

Quick recap: When Carrie was with unproblematic woodworker Aidan Shaw (John Corbett) in the original series, she cheated on him with (a married) Big. Come Season 4, she decided it was Aidan she wanted and got back together with him. Though they got engaged, Carrie couldn’t commit, and Aidan couldn’t fully forgive. Then, after she married Big in the movies, she kissed Aidan in Abu Dhabi. Though she told Big and he forgave her, by the end of the second film, Carrie had cheated on both of them with each other.

Team Big or Team Aidan continues to divide the SATC fandom. And now that Big is out of the picture, she might reconnect with her former flame. Last April, Corbett confirmed to Page Six that he’d return and “might be in quite a few” episodes. Of course, Team Aidan shippers took this to mean he’d finally get to be with Carrie, swooping in during her time of need. But not everyone’s excited about the prospects of yet another Aidan romance and the complications it might present.

More like this
A New 'And Just Like That' Table Read Pic Confirms A Key Character's Return
By Jack Irvin and Grace Wehniainen
The 8 Best Aidan Shaw Moments On 'Sex And The City'
By Grace Wehniainen
'Friends' Star Maggie Wheeler Offers Support To Matthew Perry After Reading His Memoir
By Alyssa Lapid
The 'Scream 6' Trailer Shows Off Hayden Panettiere's Return & Ghostface In NYC
By Jack Irvin and Jake Viswanath
Get Even More From Bustle — Sign Up For The Newsletter
From hair trends to relationship advice, our daily newsletter has everything you need to sound like a person who’s on TikTok, even if you aren’t.