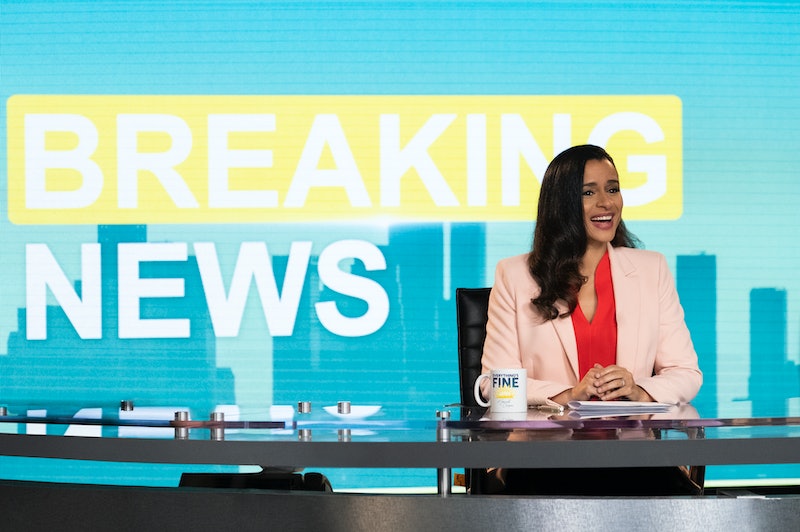 November 2016 was supposed to be Sarah Cooper's moment. Following the success of a viral blog post, she'd left her day job at Google and released her first book, 100 Tricks to Appear Smart in Meetings. But then Donald Trump won the presidential election, and everything went to hell. "Any press that I was supposed to get for [the] book completely went away," the Jamaica-born comedian tells Bustle of the way his presidency dominated the news cycle. She published another book, How to Be Successful Without Hurting Men's Feelings, in 2018 before deciding to move on and try something else.

Two years later she went viral again, this time for her TikTok videos impersonating the very man who undercut her success. The irony wasn't lost on Cooper. "I feel like I'm getting a little payback," she says. "Now I get to do something that’s even bigger than I’d ever expected or imagined was something I could do."

That something is her new Netflix variety special Sarah Cooper: Everything's Fine, directed by Natasha Lyonne and executive produced by Maya Rudolph. Like everyone trawling the internet in quarantine, Lyonne and Rudolph first took notice of Cooper through her Trump videos. It was "this instantaneous feeling of phew, yes," Rudolph says. "This is the way I needed to consume [Trump's] voice and hear this information — and laugh. I hadn’t been laughing about it. I didn’t find any of it funny. And just the absurdity of what was being said was so much easier to digest."

When they were asked to take a meeting with Cooper a few days later, they said yes.

The result is a sketch show in which Cooper plays the anchor of a disastrous newscast who "has to keep going even though the world is falling apart" around her, Cooper says. Though there are times when she lip-syncs to Trump (including a re-creation of his Access Hollywood tape), the special isn't a re-treading of her TikTok material. There are news segments about everything from Karens to climate change, with appearances from celebrities including Aubrey Plaza as a QAnon infomercial host and Helen Mirren as Billy Bush.

"We're all watching news anchors report absolutely insane things, and yet doing it with a smile on their face like everything's fine," Cooper explains of the show's concept. "I think we’re all sort of addicted to the news and Twitter and seeing what’s going to happen next in this reality show that is our lives."

Everything's Fine is a reflection of that. But at least in Cooper's hands, it's a bit less of a nightmare.