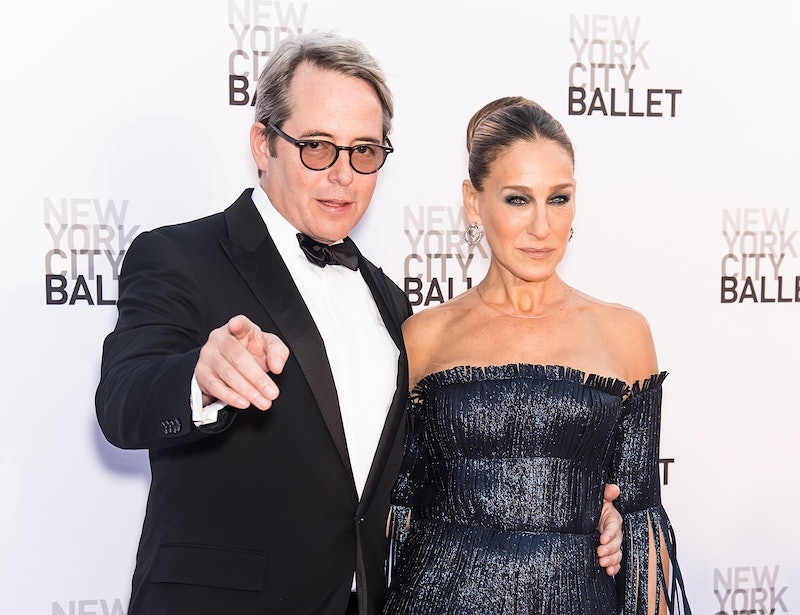 Sarah Jessica Parker spent six seasons dating her way through New York as Carrie Bradshaw on Sex and the City. But her real life love story was far less chaotic. One year before the series premiered, she married Matthew Broderick — aka Ferris Bueller — and the two have been together for nearly 30 years. Ahead of HBO Max’s Sex and the City reboot, And Just Like That..., look back at their relationship.

Broderick and Parker met in 1991, shortly after Parker had broken up with Robert Downey Jr. Parker’s brothers, Pippin and Toby, had helped to start the Naked Angels Theatre company, where Broderick directed a play. Shortly afterward, they introduced Broderick to their sister.

In a 1996 interview with the New York Times, Parker recalled Broderick asking her out via voicemail. “He left a very charming, very self-effacing message on the machine," she said. "You know, 'Hi, it's Matthew Broderick.' You had to use your last name."

1996: They Appear Onstage Together

After dating for several years, the duo starred in How to Succeed in Business Without Really Trying on Broadway in 1996. “I’m so nervous acting opposite him,” Parker told the Los Angeles Times ahead of the show’s debut. “I don’t know how we’re going to manage this without laughing hysterically at each other. We do not discuss it. I don’t even want to rehearse — I’m going to go onstage with a big blinder on my head — I don’t know what I’m thinking.”

Of Broderick she said, “He’s so bright, so handsome, I think he’s the most handsome man I’ve seen in my life. And he inspires me. I’m mad for him, totally.”

On May 19, 1997, Broderick and Parker wed at New York’s Angel Orensanz Synagogue. The couple had pretended as though the evening was just a party before surprising their 100 guests with an impromptu wedding. In a move that would foreshadow the unexpected and fashion-forward nature of Carrie Bradshaw, Parker wore a black dress.

On October 28, 2002, Broderick and Parker welcomed their first son, James. "If I could revisit one moment in my life, it would be the birth of my children, definitely,” Parker told The Edit magazine in 2016. "I only got to give birth once. James is like, why do you always want to talk about that?!”

Broderick and Parker became parents to twin daughters, Marion and Tabitha, via surrogate on June 22, 2009. “We tried and tried and tried and tried to get pregnant," Parker told Vogue in 2010. "But it just was not to be, the conventional way. I would give birth as often as I could, if I could. I cherished all the milestones, the good and the bad."

2011: Parker Discusses The Ups & Downs Of Their Relationship

In 2011, Parker spoke to the Telegraph about the struggles of marriage. “We’ve been together for 20 years and you have good days, you have decent days, and you have bad days,” she said, per Us Weekly. “That’s a marriage. That’s a relationship. That’s a friendship, even — relationships outside the marriage run the same course.” She continued: “If you’re in it for the long haul and you want meaningful relationships, you are going to go through lots of different periods.”

“I love Matthew Broderick. Call me crazy, but I love him,” she told Harper’s Bazaar. “We can only be in the marriage we are. We’re very devoted to our family and our lives. I love our life. I love that he’s the father of my children, and it’s because of him that there’s this whole other world that I love.”

2014: Broderick Opens Up About Parker To Meredith Vieira

In the brief interview on Vieira’s self-titled talk show, Broderick spoke about how happy he is to have had such a long marriage. "We really are friends beyond everything else and we talk a lot," he said. "Keep talking I guess, I know how cliché that is. Too much silence is definitely not a good idea."

2017: The Couple Celebrates 20 Years Of Marriage

2020: Broderick & Parker Return To The Stage

In February 2020, the couple returned to the theater for a short pre-Broadway run of their show, Plaza Suite. They announced the project in September 2019, with plans to debut on Broadway in March 2020. The lockdown obviously pushed back the opening date. Plaza Suite is now set to open on March 28, 2022.

Parker honored Broderick’s 59th birthday via Instagram, posting a blurry photo of a cake with some lit candles captioned, “Happy birthday Husband. We love you and we are oh so happy, grateful you were born.XXX, your SJ and 3 besotted young Broderick’s.”

More like this
Remember When Benedict Cumberbatch Announced His Engagement In A Newspaper Ad?
By Hugh McIntyre
Jason Oppenheim Broke Down In Tears Over His Chrishell Breakup On The 'Selling Sunset' Reunion
By Bustle Editors
Britney Spears Set A Wedding Date With Fiancé Sam Asghari & Previewed Her Dress
By Bustle Editors
The 1st Photo Of Priyanka & Nick's' Baby Comes After 100 Days In The Hospital
By Jake Viswanath and Hugh McIntyre
Get Even More From Bustle — Sign Up For The Newsletter