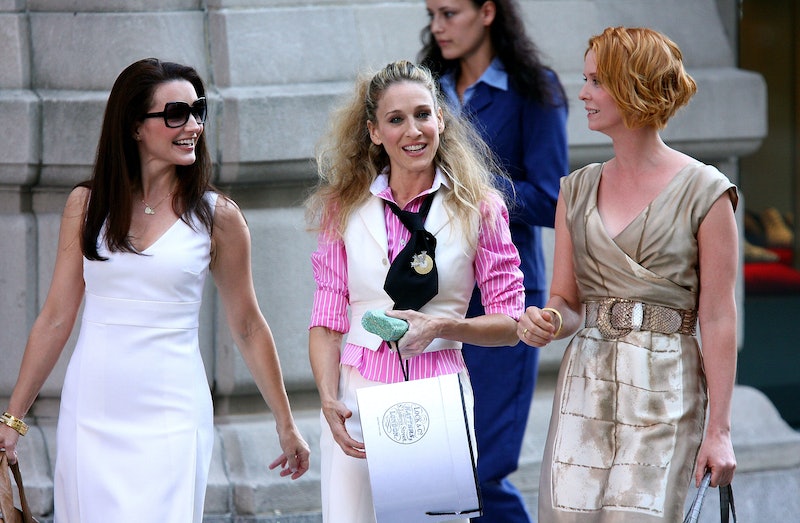 And just like that, Carrie, Miranda, and Charlotte were reunited. To kick off production on the upcoming HBO Max Sex and the City reboot, Sarah Jessica Parker posted a photo with longtime co-stars Cynthia Nixon and Kristin Davis on Friday, June 11. Captioning the image of the trio, “Together again,” Parker noted that reading through the first episodes of And Just Like That… alongside “all the fellas and our newest cast members” was like “an ice cream sundae.”

Reactions to the post, which racked up more than 1.2. million likes as of publication, were equally as sweet. “Love you forever and ever,” Davis replied, adding five red heart emojis. Meanwhile (probably) across town, Nixon shared the same photo, adding the caption: “Friendship never goes out of style.” Amy Sedaris, who played Carrie’s book publisher in the original HBO series, commented that the “gals look fantastic,” and Andy Cohen even referenced Charlotte’s Poughkeepsie scene from the 2008 SATC movie, writing, “I just pooped my pants.”

Parker’s Manolo-clad walk down memory lane had begun one night earlier when she shared an Instagram photo of Carrie’s stoop on Perry Street in New York City. Explaining that it was a “pure coincidence” she found herself there “the night before it all begins again,” the actor admitted she was both “thrilled and terrified.” (Davis, who got “stuck in traffic” on the way to set the next day, replied, “Hahaha- ME Too xoxo.”) The emotions continued into the next day after Parker arrive to work “way too early” and shared some behind-the-scenes images of the first table read setup. “Nerves all a wonderful jumble,” she wrote.

In addition to her, Nixon, and Davis’ stations at the table, Parker’s photos also revealed script and iPad setups for returning cast members Chris Noth (John James “Mr. Big” Preston), Willie Garson (Stanford Blatch), and Mario Cantone (Anthony Marentino). It was only announced on June 9 that the latter two men, along with David Eigenberg (Steve Brady) and Evan Handler (Harry Goldenblatt), would reprise their roles in And Just Like That… Parker also showed a place for Grey’s Anatomy alum Sara Ramírez, who will play Che Diaz, a nonbinary, queer comedian who hosts a podcast where Carrie is a regular guest.

Noticeably absent, of course, was Kim Cattrall, who previously played Samantha Jones but has been vocal about not wanting to join the upcoming show about the women navigating their 50s in NYC. As Parker noted in a January TMZ interview, And Just Like That… will not replace Cattrall. “We’re not looking to create a fourth character,” she said at the time. “We have New York City as the fourth character. There will be lots of interesting, new characters we are super excited about.”

Even without Samantha, Sex and the City author Candace Bushnell previously said the reboot would work “fine.” “Kim is a grown woman. She is 64 and she’s made a decision that I’m sure she has 10 very good reasons for and I respect her for that,” Bushnell told Page Six in January. “I think that her character Samantha is always going to be an inspiration to them. So somehow, I imagine she’ll be there in spirit and as an inspiration that gives them a chance of exploring sexuality with different characters.”

Anyone who couldn’t help but wonder what Samantha’s up to these days would be forgiven, though.

More like this
Lisa Kudrow Explained How Her Body Image Changed While Filming 'Friends'
By Grace Wehniainen
Miranda Cosgrove Reacts To Jennette McCurdy’s Shocking ‘iCarly’ Revelations
By Grace Wehniainen
An Ultimate Guide To The Music Of 'Rap Sh!t'
By Brad Witter
Josh Peck Shows Love To Jennette McCurdy After Her Shocking 'iCarly' Revelations
By Radhika Menon
Get Even More From Bustle — Sign Up For The Newsletter