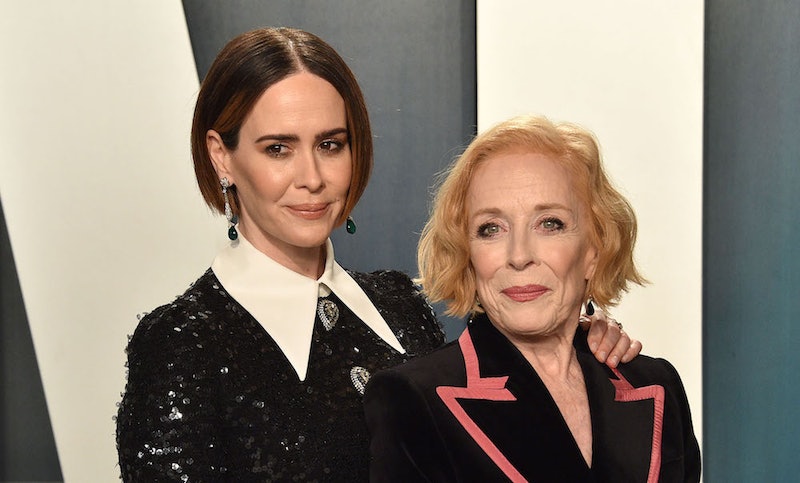 Sarah Paulson might not be the deranged, homicidal nurse she plays in Netflix's Ratched, but she will “cut a b*tch” who dares disrespect her loved ones. Sarah Paulson addressed the ageist fixation on her relationship with Holland Taylor in a new interview published on Tuesday, and admitted she is very protective of her close friends and family. The actor, 45, opened up about her relationship with Taylor, 77, in a conversation with author Roxane Gay for Harper’s Bazaar. When asked about the public fixation and critiques of the duo’s age gap, she pointed to two things: death and ageism.

More specially, Paulson cited the avoidance of our own mortality as a factor of the fixation, as well as "our own ageist thinking and the idea that to be old is to cease to have any desire." That said, Paulson insisted that the attention that she and her partner receive is largely positive. And when she does hear anything negative, she has zero tolerance for it. “Anybody says anything about any person I love in a way that is disrespectful or cruel and I want to cut a b*tch,” Paulson said.

Given her sinister turns in Ryan Murphy’s TV series American Horror Story and now, Ratched — Murphy’s latest Netflix psychological thriller that chronicles the origins of nurse Mildred Ratched, the antagonist from Ken Kesey’s 1962 novel One Flew Over the Cuckoo's Nest — Paulson could likely very well "cut a b*tch," indeed, so it’s probably best not to utter any ill speak about her love life.

Paulson and Taylor have been linked since 2015, after Taylor appeared on the Death, Sex & Money podcast and gushed about her partner. While she didn’t divulge Paulson’s identity at the time, Taylor said her partner was younger and the two have discussed marriage. “It’s the most wonderful, extraordinary thing that could have ever possibly happened in my life,” she said of the relationship. Post-interview, multiple sources confirmed to PEOPLE that the two were an item.

A year later, Paulson opened up about their unorthodox relationship in an interview with The New York Times, revealing she was in love. “My choices in romantic partners have not been conventional, and therefore the idea that it is 'other' makes it compelling,” she said. “If my life choices had to be predicated based on what was expected of me from a community on either side, that’s going to make me feel really straitjacketed, and I don’t want to feel that,” Paulson added. “What I can say absolutely is that I am in love, and that person happens to be Holland Taylor.”

More like this
Paris Hilton & Carter Reum’s Relationship Timeline Includes A Surprise Baby Boy
By Bustle Editors
Hilary Duff's Husband Matthew Koma Has Her Name Tattooed On His Butt
By Jake Viswanath and Stephanie Downs
Everything You Need To Know About Kanye's Post-Kardashian Dating Life
By Bustle Editors
Daryl McCormack Has A Very Special Lady In His Life
By El Hunt
Get Even More From Bustle — Sign Up For The Newsletter
From hair trends to relationship advice, our daily newsletter has everything you need to sound like a person who’s on TikTok, even if you aren’t.