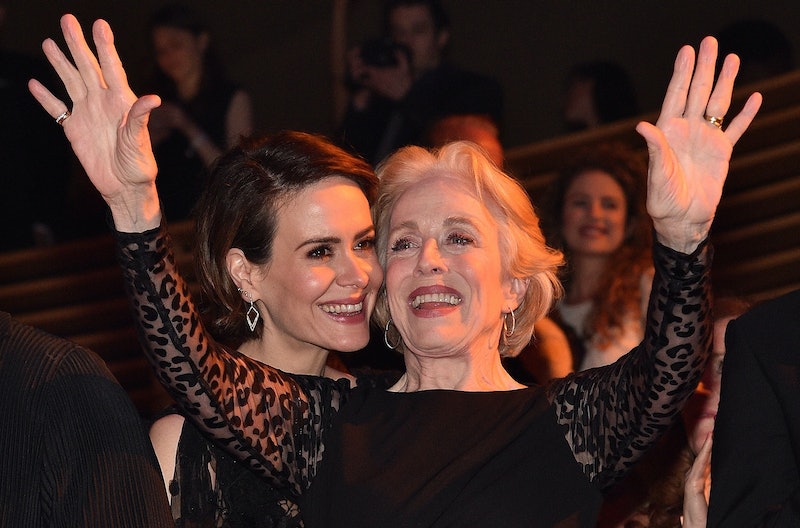 Sarah Paulson and Holland Taylor have a love for the ages. The lovebirds met at a dinner party in 2005, but they didn’t start dating until more than a decade later. When rumors of their relationship initially surfaced, fans already started describing the couple as “iconic.” Now, five years after they became an item in 2015 — apparently after Holland slid into Paulson’s Twitter DMs — the Emmy-winning American Horror Story star and the legendary Legally Blonde star have become a landmark example of LGBTQ+ romance in Hollywood.

Here’s everything we know about the inspiring love between Paulson, 46, and Taylor, 78.

The actors reportedly met at a dinner party in 2005. Nothing happened romantically, as they were both in committed relationships at the time. However, it seems sparks flew regardless. Paulson reflected on the event in a 2016 interview with The New York Times, saying that Taylor was “probably the most exquisitely beautiful woman” she had ever seen.

In November 2015, Taylor confirmed she was in a relationship with a woman who was younger than her, without giving Paulson’s name. “There’s a very big age difference between us which I’m sure shocks a lot of people, and it startles me,” she said in an interview with radio station WNYC. “But as they say, ‘If she dies, she dies.’” Later that month, she posted a photo of Paulson dressed in a ballgown during a wardrobe fitting, writing “When captions fail...” — immediately making fans speculate that Paulson was the unspecified girlfriend.

Although Taylor had yet to confirm that Paulson was indeed her girlfriend, the couple went to their first public event together in January 2016, attending the Critics’ Choice Awards. While they didn’t walk the red carpet together, with Paulson taking it on solo, they snapped photos backstage with Regina King.

Just a couple months later, Paulson confirmed her relationship with Taylor in an interview with The New York Times, clarifying that she wouldn’t label her sexuality. “If my life choices had to be predicated based on what was expected of me from a community on either side, that’s going to make me feel really straitjacketed, and I don’t want to feel that,” she said. “What I can say absolutely is that I am in love, and that person happens to be Holland Taylor.”

The actor went on to say that she found the attention over her relationship “surreal,” especially when it came to their age difference, which she opened up about. “There’s a poignancy to being with someone older,” she explained. “I think there’s a greater appreciation of time and what you have together and what’s important, and it can make the little things seem very small. It puts a kind of sharp light mixed with a sort of diffused light on something.”

September 2016: Paulson Thanks Taylor At The Emmys

At the 2016 Primetime Emmy Awards, Paulson won Outstanding Lead Actress in a Limited Series for her role as prosecutor Marcia Clark in American Crime Story: The People v. O.J. Simpson. Although Taylor wasn’t in attendance, Paulson still gave her a shout-out during her acceptance speech, as well as earlier on the red carpet: “Hi, Holland — Holland Taylor, if you're watching, I love you.”

December 2018: They Ring In The New Year

On New Year’s Day, Paulson posted a selfie on Instagram of her and Taylor wearing sequined New Year’s hats with their arms wrapped around each other. “The Only One,” she captioned the post, alongside the #happynewyear hashtag and a bevy of emojis. Taylor shared a similar photo on her own Instagram, calling them a “#PerfectUnion.”

During an interview on Watch What Happens Live with Andy Cohen, Paulson explained that she connected with Taylor on Twitter. “We sort of breezed by one another, and then started following each other on Twitter,” she explained at the 2:04 mark in the video below before fellow guest Billy Eichner asked, “Holland Taylor slid into your DMs?” Impressively, she did make the first move. “She actually did. Yeah, it’s pretty great,” Paulson recalled.

In an interview with Us Weekly, Taylor commended Paulson for being in a relationship with her, sweetly adding that Paulson was “the center of my life” and commenting on their age difference. “A big age span is a challenge to any relationship, and she’s just very brave,” she said. “She’s very brave and she is very truthful and she’s going to live her truth. And so I basically am following her lead and I’m blessed. I’m blessed to have the life I have right now, which no one could’ve predicted in 1,000 years.”

On Dec. 17, 2020, Taylor commemorated her girlfriend’s 46th birthday by sharing a candid photo of Paulson sitting in what looks to be a restaurant booth. “Yes, but listen— y’all have no idea,” she wrote. “Happy Birthday to my one and only. I’m grateful you were born, @mssarahcatharinepaulson.”

For Taylor’s 78th birthday, Paulson made it known how devoted she still was to Taylor. Taking to Instagram, the star shared a black-and-white portrait of Taylor. “All roads lead me to this face, those eyes, that soul,” she wrote. “You are, quite simply — everything to me.”

Hilariously, she also added another message directed at Taylor, predicting that she was going to criticize her photo choice. “If you don’t like this picture, you are an idiot, so don’t get mad when you see it. I even made it black and white since you prefer it. So shhhhhh. It’s a perfect picture of a perfect person,” she wrote in parentheses. With Paulson in the picture, they make a perfect couple.

More like this
Here’s What Happens To Bill & Frank In 'The Last Of Us' Video Game
By Brad Witter
Hilary Duff's Husband Matthew Koma Has Her Name Tattooed On His Butt
By Jake Viswanath and Stephanie Downs
Michael B. Jordan Tackled His "Public Breakup" With Lori Harvey On 'SNL'
By Brad Witter
Who Is Allison Williams Dating After Her Divorce? She’s Engaged With A Child
By Jake Viswanath
Get Even More From Bustle — Sign Up For The Newsletter
From hair trends to relationship advice, our daily newsletter has everything you need to sound like a person who’s on TikTok, even if you aren’t.