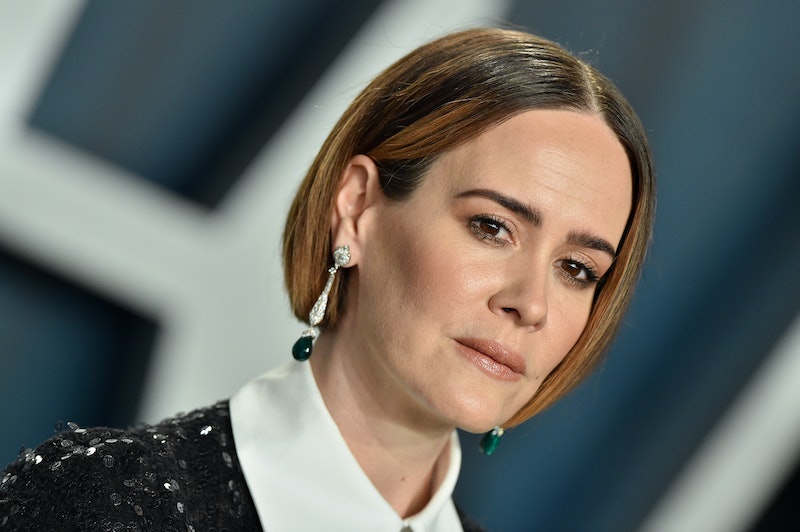 When it comes to the world of American Horror Story, it's difficult not to picture Sarah Paulson in front of the camera, but that might not always be the case. Despite confirming that she plans to be involved in the AHS spinoff series, Sarah Paulson revealed that her American Horror Stories role might be totally different. While speaking to The Wrap during a virtual Summer CTAM panel for Netflix's Ratched, the American Crime Story star revealed that while she isn't entirely sure if she'll be starring in the highly anticipated FX anthology series spinoff, she can confirm that she'll be doing some work behind the camera in a directorial capacity, at the very least.

“I don’t know if I’m going to be in it, but I do think I’ll be directing it,” Paulson explained. “Can I say that? I can say that. Directing something, not all of them, but something.” That alone isn't much to go on in regards to what the series will actually be about. However, knowing that Paulson will be at the helm for an episode or two is comforting, given her longstanding ties to the franchise.

FX initially announced the project in late May, describing the AHS spinoff as a “weekly anthology series that will feature a different horror story each episode," indicating that each installment will serve as a standalone story.

It was also at this time that the network decided to push American Horror Story's tenth season — which Paulson is set to star in — to 2021 due to the COVID-19 pandemic. Meanwhile, American Crime Story's next installment, titled Impeachment, (also starring Paulson) has yet to be given a firm premiere date. So as for when fans should be marking their calendars for either project, the Mrs. America actor says your guess is as good as hers. “Oh gosh, I don’t know any more than you all do,” Paulson said, per The Wrap. “Certainly, it depends on the state of the world. California is not having its finest moment right now dealing with this virus. And both productions will be shooting in Los Angeles, so that will sort of dictate how that works."

That said, she has heard of a few rumored dates floating around. "We were less than two weeks away from starting Impeachment when everything shut down," she added. "So I’ve heard rumors of October, then I heard rumors of 2021. Lot of rumors, no facts though.”

With so much uncertainty, it's hard to know when exactly we can expect our next AHS fix. Thankfully, Ratched will make its Netflix debut on Friday, Sept. 18 to help fill the void.