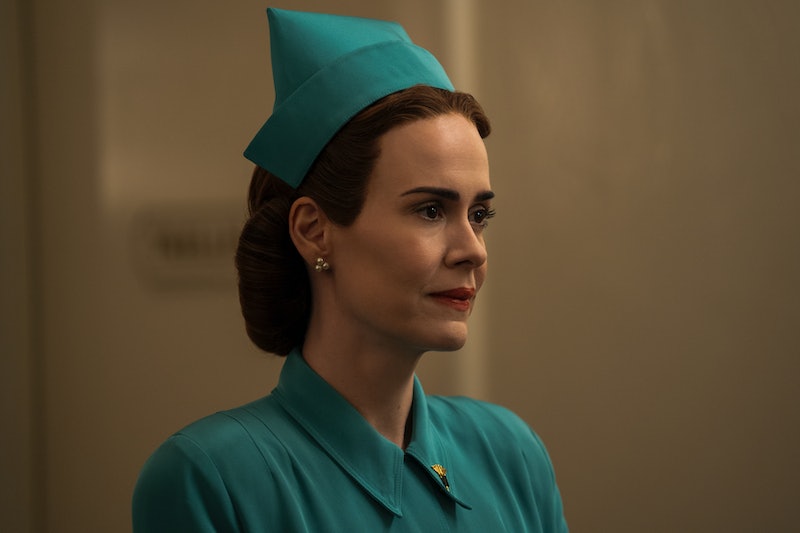 Fans of American Horror Story are used to being scared by Sarah Paulson, but the actor's new role could be one of her most terrifying yet. Paulson's Ratched character, Nurse Mildred Ratched, is one of cinema's most iconic villains, having served as the main antagonist in the acclaimed 1962 novel One Flew Over the Cuckoo's Nest and its very famous movie adaptation. But Paulson isn't just offering up some rehash of Louise Fletcher's performance from the 1975 film. Ratched is a prequel story, and Paulson is showing off a completely different side of the notorious nurse.

"I remember when I first saw the movie, thinking years ago that she was absolutely a villain and evil and all this stuff," Paulson told reporters at a press conference. "And then when I rewatched it before we started, I thought, 'This is sort of a woman who is a victim of a patriarchal infrastructure in this hospital' ... Could it be considered that she didn’t have any choice about whether or not she could access her heart in her work, if she could bring her femininity and her womanhood to the job?'" Perhaps, Paulson continued, "She’s not a villain, but she’s a person who didn’t have any recourse."

In the original film, Ratched is the head nurse at a mental institution called Salem State Hospital. She acts essentially as a dictator over her patients, cruelly ruling over every aspect of their lives. She is a sadist who enjoys torturing and belittling those in her care, abusing them both mentally and physically and trying to make them feel less than human. It's difficult to make the argument that she has any redeeming qualities. But Paulson's younger version of Ratched is more nuanced, and though there are likely still dark parts of her, she can't necessarily be categorized as a full-stop villain.

"I was interested in this idea of, ‘Who is Mildred Ratched when she takes that key and turns it and goes into her house during that movie? Who is that woman?'" Paulson said. "It would be impossible to undertake it without thinking we’ve got to show something here that has yet to be seen. And it’s entirely up to us; we can invent it because there is no backstory. And so that’s an enormous freedom and we can give context and depth to things that maybe weren’t there."

For viewers familiar with the character, it may be difficult to see Nurse Ratched as anything but a callous tyrant. But Paulson had the same apprehensiveness initially. "It was interesting to confront my own sort of prejudice against the character from the outset and what I had thought she was," the actor said. "I was looking for a way to get in there without being like, ‘She is so crazy.'"