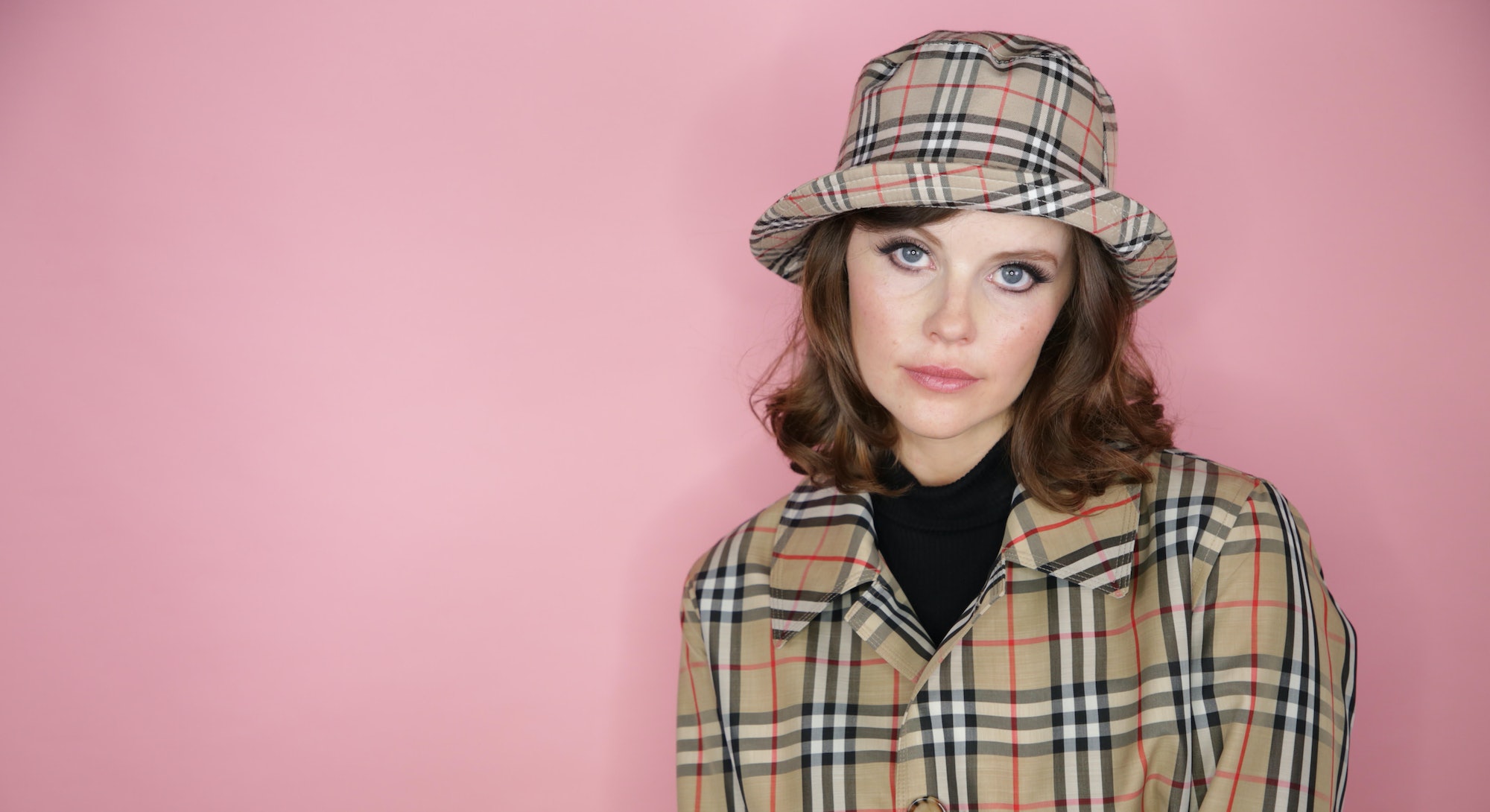 Sarah Ramos is reflecting on the complex nature of celebrity fandom when the oversized, bedazzled cup she’s drinking from enters the Zoom frame. “This cup was featured in [J.Lo’s] most recent Super Bowl commercial,” Ramos explains while taking a sip, tilting it to reveal the singer’s initials emblazoned in baby pink. She first purchased what she calls her “glitter cup” as a gag, but it’s become a part of her everyday life. “I was like, ‘Haha, I’ll get this merch,’ and now I’m like, ‘I need it every day,’” she deadpans. “It’s perfect. It carries so much water.”

Nobody takes the frivolous, fringe corners of celebrity culture more seriously than Sarah Ramos. The 29-year-old actor best known for her role as Haddie Braverman on Parenthood recently found a second wave of fame through her “Quarantscene” Instagram videos, in which she comedically re-enacts the kinds of movie scenes that are painfully nostalgic to a large swath of millennial women (think: the Toros and Clovers standoff in Bring It On, or the courtroom confessional from Legally Blonde). Launched as coronavirus stay at home orders were going into effect in March, her Quarantscenes have only grown in scope since, as she’s invited Hollywood friends like Elle Fanning, Haley Lu Richardson, Dylan O’Brien, and Chloe Fineman to pay homage to forgotten favorites like Because I Said So, prestige projects like The Social Network, and viral sensations like Emily in Paris.

Despite their length, the Quarantascenes aren’t small scale productions. Ramos produces, directs, and stars in nearly all of the videos, displaying the acting chops that made her a network mainstay while revealing the scope of her creative prowess. (In her take on Emily in Paris alone she masters the French affect of the show’s fictional fashion designer, plays a nameless concert attendee, and delivers a pitch-perfect rendition of Emily’s now-infamous defense of "ringarde" women.) The viral success of Quarantscenes is a tribute to the duality that has shaped much of Ramos’ life. Her place in the industry certainly helps make them meticulous, expertly crafted endeavors — her hairstylist donates the perfect wig for each character, Ramos’ celebrity pals often do guest spots, and her fiancé, the director Matt Spicer, plays videographer — but it’s her ability to meet her audience where they are as a fellow fan that makes them sing.

Ramos has been toeing the line between pop culture purveyor and voyeur for years. After making her screen debut as Patty Pryor on NBC’s American Dreams at 11, she worked steadily on other dramas like Scrubs, Lie to Me, and later Parenthood. But what most thrilled the young actor about her budding career was the adjacency it provided to celebrities. Ramos calls her adolescent self an “autograph hound” who spent her preteen years attending premieres in order to snap photos with early-aughts icons like Jamie Lynn Spears, Aaron Carter, Amanda Bynes, and the Olsen twins. But there were plenty of entertainment insiders eager to rain on her unfashionably earnest parade.

"People were like ‘Oh, [you’re taking pictures with] the Olsen twins. You're a stupid kid. That’s tacky,’” Ramos recalls. “Whereas I was having a nearly spiritual experience that was complicated, because I was going to premieres, meeting celebrities, and getting pictures with them. But I was an actor, we were kind of peers, and I was 12.” By high school Ramos, too, came to regard her prior behavior as gauche, intent on contorting herself into an “effortless, well-adjusted cool girl” she felt she needed to become. “I went through a phase where I was like, ‘I don't like pop culture. I'm serious now.’ I read existential literature and only listened to Bob Dylan and Leonard Cohen. It was so joyless.”

After taking a break from acting to attend Columbia University, Ramos graduated with a degree in Creative Writing and a renewed desire to pursue the things she found interesting — the industry be damned. She turned her archive of childhood photos with celebrities into a digital exhibit. Then she shot and starred in City Girl, a web series based on the rom-com script she wrote in 2003. But it's her exploration of front-facing camera Instagram comedy that's finally making people take notice of her artistic pivot.

"I was like, ‘Nobody's going to like this,’ and then people would be like, ‘I'm dying. Do more,’” Ramos says of the Quarantscenes’ virality. “I realized, 'Oh, there is value in the stuff that I thought was only private for myself,’ and I learned to trust that [instinct]. Because even with City Girl [people] were like, ‘What is this going to do for you?’ So all of this [success] came from following this instinct [even when] people were telling me, ‘Don't spend your time on that.’”

"What I've done with these projects is shown that as long as you put in a sh*t ton of effort — like I have put so much time, energy, and money into The Renner Files — they're serious endeavors."

Ramos’ latest project is the pinnacle of her following the whims of her extremely specific interests. The Renner Files is a six-episode podcast that does a deep dive into Jeremy Renner’s ill-fated app. In it, Ramos and TV writer and comedian Caroline Goldfarb seek answers to eternal questions like, "Why did Oscar-nominated actor Renner ever have an app? Who used it? And why did it shake the internet to its core?" But while the hosts get a kick out of doing their best Sarah Koenig impressions, the self-described "neurotic and intense" Ramos insists The Renner Files isn't satirical. Amid jokes about The Hurt Locker actor, the podcast makes surprising revelations about the world of celebrity side hustles and the pervasiveness of toxic masculinity in Hollywood. While interrogating another actor’s obscure vanity project might fall into the category of things people might consider not worth spending their time on, Ramos is steadfast in her dedication to the podcast.

"What I've done with these projects is shown that as long as you put in a sh*t ton of effort — like I have put so much time, energy, and money into The Renner Files — they're serious endeavors," she says. "We may dunk on Jeremy Renner a little bit, but it's not meant to take him down. It's meant to seriously engage with [the idea that] he's an actor who's been in the industry for 20 years and he's gone through many different iterations of his career that people may not understand. I'm like, 'Let's delve into that. I relate to that.'"

Ramos' sh*t ton of effort is finally paying off. She, Spicer, and Rick and Morty co-creator Dan Harmon are developing a show where they produce other artists' childhood scripts. In partnership with the THNK1994 Museum she's releasing a zine version of her autograph hound series. And Ramos and Goldfarb are already thinking of continuing The Renner Files in the fashion of famed podcast You Must Remember This — which explores a different secret Old Hollywood story each season — but for "stupid stuff, like Jon Bon Jovi's pasta sauce."

"It was definitely a journey," Ramos says of her newfound ability to embrace her inner fangirl. "I think all of these projects are a manifestation of [that journey]. Now I just try to really revel in the things that actually bring me joy." She takes another sip from the J.Lo cup before the Zoom call goes dark.