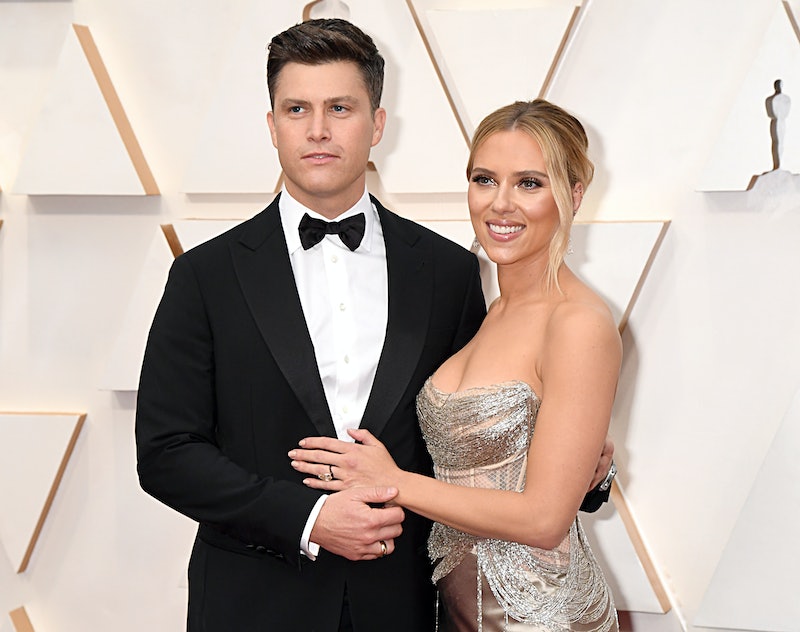 First comes love, then comes adorable Saturday Night Live appearances, and finally, marriage. Scarlett Johansson and Colin Jost are married after three years of dating. The Oscar-nominated actor tied the knot with the SNL star in a private ceremony over the weekend, and the newlyweds chose to announce their big news with Meals on Wheels on Instagram.

The organization shared a photo of the Staten Island Ferry photoshopped with the traditional aluminum wedding cans, complete with the clever caption, "Jost Married." "We're thrilled to break the news that Scarlett Johansson and Colin Jost were married over the weekend in an intimate ceremony with their immediate family and love ones, following COVID-19 safety precautions as directed by the CDC," the post read.

However, in lieu of wedding gifts, the couple is hoping to raise awareness for the charity, which delivers meals to senior citizens in need. "Their wedding wish is to help make a difference for vulnerable older adults during this difficult time by supporting @mealsonwheelsamerica," the caption said. "Please consider donating to celebrate the happy couple by clicking the link in our bio."

The couple got engaged in May 2019 after two years of dating, with Johansson telling Ellen DeGeneres in December that Jost popped the question in a "James Bond" way. "He's very charming and very thoughtful and romantic," she said. "It was very personal. It was a very special moment." However, their relationship goes as far back as 2006, when Johansson hosted SNL for the first time and Jost was simply a writer on the show. "We've kind of known each other since then," he told Entertainment Tonight in September 2017. "She's the best."

The pair didn't reconnect until 2017, when Johansson divorced her then-husband Romain Dauriac as she was preparing for her fifth hosting stint on SNL. That May, outlets reported that Johannson and Jost had been "hooking up" for a couple of months since reconnecting on the show. That fall, they confirmed their relationship publicly with SNL guest appearances. Their journey came full circle in December 2019, when Johansson hosted the show again and paid tribute to her fiancé in her monologue. "I just want to say that this place means so much to me," she said before giving Jost a kiss onstage. "I have so many friends here, and I met the love of my life here."