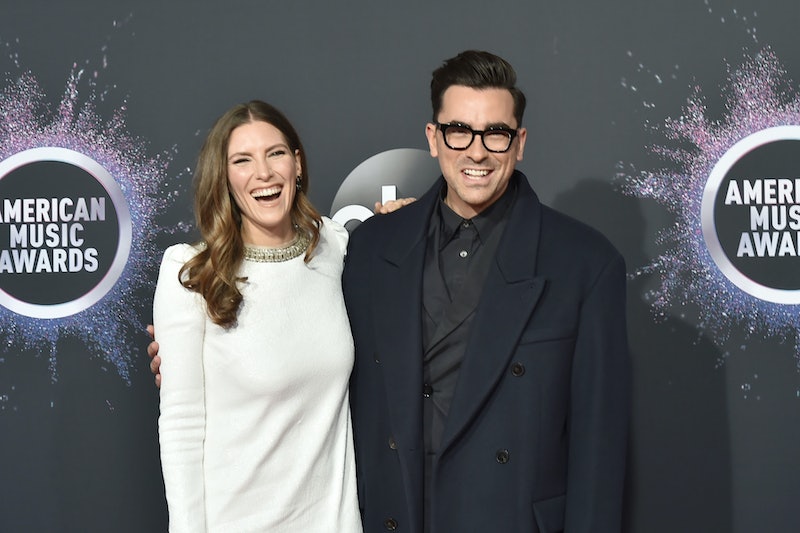 Not only is Schitt’s Creek resident Twyla Sands secretly a lottery winner, the actor who plays her is now a married woman. Schitt’s Creek star Sarah Levy married fellow actor and producer Graham Outerbridge on Oct. 16. And in true David Rose fashion, the one person possibly more excited than the bride on her big day was her brother Dan Levy, who announced the news before she did. As his onscreen sister Alexis Rose would say, “Oh my god, David.”

On Oct. 18, Dan took to Instagram to share his sister’s newlywed status, posting a black-and-white snapshot of the siblings dancing during the big soiree, with Sarah dressed in a sleek bridal gown wrapped in a huge bow. “My sister got married this weekend,” he wrote. “This is absolutely not a photo of us screaming the lyrics to S Club Party on the dance floor. Love you, @sarahplevy.”

However, he actually spilled the beans before the ceremony. As reported by PEOPLE, Dan took to his Instagram Story to share a picture of his sister posing with cupcakes and wearing a sash made up of photos of herself and Outerbridge, with a “Happily Ever After” sign hanging in the background. “Sister getting married!” he captioned the photo. “Let’s go @sarahplevy.”

Shortly after her brother posted, Sarah confirmed the big news on Instagram, sharing photo booth pictures with her groom from their nuptials. “Bells are ringing,” she captioned the post, confirming their wedding date. While Outerbridge hasn’t shared his own wedding post yet, he did repost some guests’ videos on his Instagram Story, including a clip of him and Sarah having their first dance as husband and wife.

While it’s not known when they started dating, Levy and Outerbridge have been together since at least 2018, when they made their relationship Instagram-official by sharing photos from a couples trip to Bermuda and an event in Lake Placid, New York. Since then, the couple hasn’t stopped gushing about each other on social media. When Schitt’s Creek ended in April 2020, Outerbridge paid tribute to both his now-wife and her iconic character Twyla. “She’s the most talented and graceful person I’ve met, and I’m luckier than I could ever imagine,” he wrote on Instagram. “I love you @sarahplevy! Twyla was such a gift!”

Despite proclaiming their love often on Instagram, the couple never publicly confirmed when they got engaged, making the wedding announcement all the more surprising to fans.