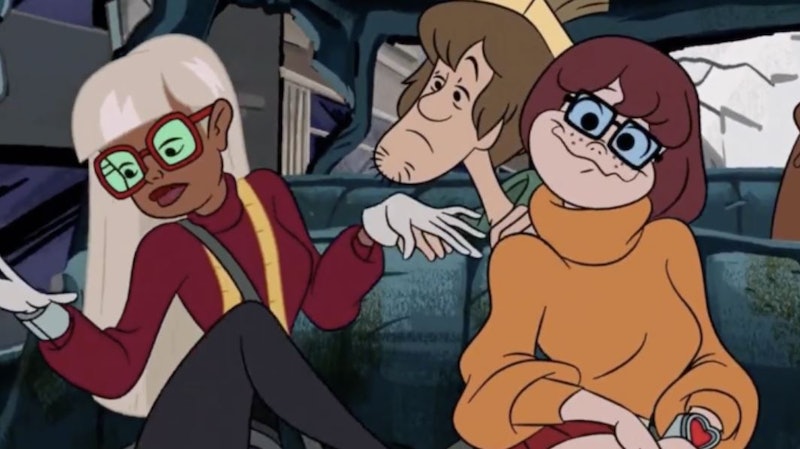 A new film about our favorite Mystery Machine gang called Trick Or Treat Scooby-Doo is out digitally and it confirmed that one of the characters is officially out, too. The long-held theory that the beloved Scooby-Doo character Velma Dinkley is a lesbian is confirmed in the new film, and fans on Twitter are rejoicing.

In the film, which is available now to rent or purchase, Velma meets a costume designer (and criminal) named Coco Diablo with whom she is immediately smitten. Despite trying to hold it together, Velma is googly-eyed and enamored with Coco. Eventually, she confides in Daphne admitting that she’s “big time crushing” on the newest Scooby Doo universe character.

This change didn’t just come out of nowhere — James Gunn, who wrote the live-action Scooby-Doo films, confirmed that Velma was supposed to be gay in the early 2000s, but the studio didn’t let him go there. “In 2001 Velma was explicitly gay in my initial script,” he wrote in a now-deleted 2020 tweet. “But the studio just kept watering it down & watering it down, becoming ambiguous (the version shot), then nothing (the released version) & finally having a boyfriend (the sequel).”

Tony Cervone, who served as supervising producer on the Mystery Incorporated series also confirmed that this was canon in an Instagram post celebrating Pride Month in 2020. “I’ve said this before, but Velma in ‘Mystery Incorporated’ is not bi. She’s gay,” he wrote. “We always planned on Velma acting a little off and out of character when she was dating Shaggy because that relationship was wrong for her and she had unspoken difficulty with the why. There are hints about the why in that episode with the mermaid, and if you follow the entire Marcie arc it seems as clear as we could make it 10 years ago. I don’t think Marcie and Velma had time to act on their feelings during the main timeline, but post reset, they are a couple. You can not like it, but this was our intention.”

His post has since been edited to read, “I obviously don’t represent every version of Velma Dinkley, but I am one of the key people that represents this one. We made our intentions as clear as we could ten years ago. Most of our fans got it. To those that didn’t, I suggest you look closer. There’s no new news here.”

Clips from the new movie hit Twitter on Oct. 4 and fans were excited to see the character explicitly interested in women. One tweet read, “OMG LESBIAN VELMA FINALLY CANON CANON IN THE MOVIES LETS GOOOOOO,” while another celebrated, “I never thought I'd live to see the day when Velma is very clearly having gay thoughts on-screen.” Comedian Billy Eichner also weighed in, congratulating Velma on coming out.

Mindy Kaling also has an “adult animated” series about Velma in the works at HBO Max. While there’s no word yet as to whether her version of the iconic character will be out, Kaling has made at least one change to her rendering: at the Warner Bros. Discovery Upfront, she told attendees that her Velma will be of South Asian heritage. “If people freak out about that, I don’t care,” she said.