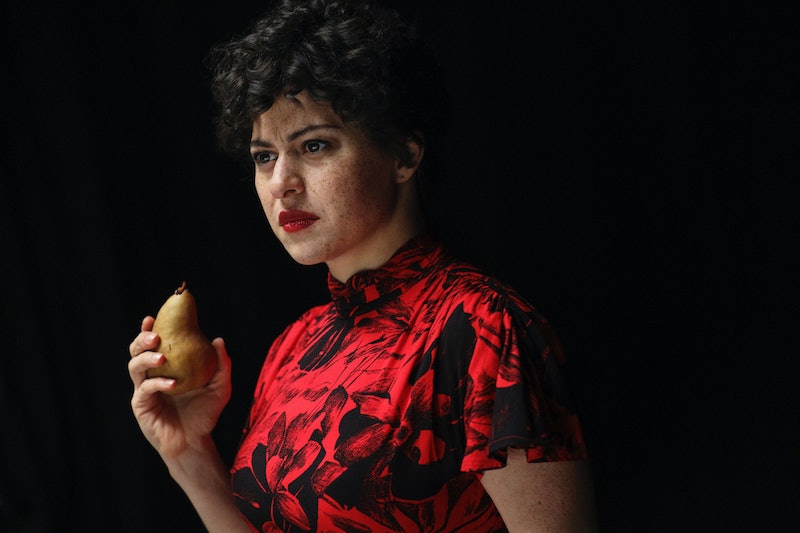 The final episode of the season finds everyone gathered at Dory’s funeral, including multiple versions of Dory herself, looking on as a ghostly presence. The scene has everything you would expect from a Search Party funeral, including musical interludes, dramatic and colorful fashion, and some very perceptive narcissism. As almost every character we’ve met comes to pay their respects, past iterations of Dory file in to the back seats, each seemingly mulling her legacy before she disappears entirely. At least, until we see Dory come back to life in the back of an ambulance in the episode's final moments.

If you got sucked in to believing even momentarily that Dory was really dead, that’s by design. Search Party creators and executive producers Sarah-Violet Bliss and Charles Rogers tell Bustle they hoped the finale would bewilder audiences more than a little. They even toyed with the idea that there's a version of the show that really does end with Dory’s death.

“If anything, we were kind of trying to work against clueing the viewer into it,” Rogers says. “There are scenes that Dory’s ghost isn’t in, and [we thought] that that would be particularly disorienting for a viewer." The result, Rogers says, is something that is "trippier and more unexpected."

The shocking reveal also gave Bliss and Rogers more ideas to work with for a potential fifth season. “We thought if that was a vision in momentary death, if there were to be another season, there’s something interesting to say about being on the other side of that.”

So where does Search Party go from here? Although we saw a steely-eyed Dory make her way to the funeral and listen to all her friends’ eulogies, we also saw her come to in an ambulance exclaiming that she was dead and she “saw everything.” It all depends on what happens after Dory gasps back to life, and if the show gets renewed for another season.

“I think we can say it’s not confirmed there’s a fifth season,” says Rogers, “[But] there’s something interesting about exploring what it means to have died and come back from death. And Alia as an actor is infinitely dynamic, and the show could have a million seasons and still find new sides of her to bring out.”