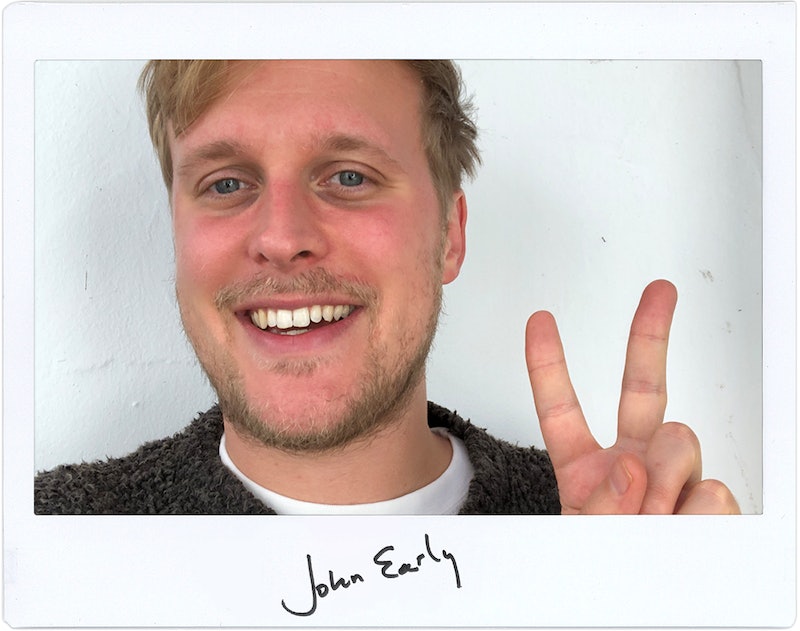 When celebrities (virtually) hang out with Bustle writers, we want to give them the chance to leave their mark. Literally. So we hand them a pen, a piece of paper, a few questions, and ask them to get creative. This time, Search Party star John Early is leaving his mark in the Bustle Booth.

John Early loves to dance. But unlike TikTok stars or even normal people, he doesn't dance to music — at least not in the videos that have gone viral on his social media. Instead, he's usually silently flaunting his '90s boy band-indebted moves with glee while dressed in a flashy outfit like a matching sweatsuit or fleece camouflage.

It all started with a monochrome white ensemble he wore in character as the flamboyant pathological liar Elliott Goss on the set of the TBS-turned-HBO Max comedy Search Party. "I looked like a Backstreet Boy," Early laughs. So he busted out his best "late-'90s white boy appropriating hip-hop" dance moves in front of passersby on the street while his co-star filmed him. "When you're shooting in New York wearing these insane outfits, you become very immune to strangers looking at you like you're insane," he explains.

Song and dance are hallmarks of Early's comedy: he's done his iconic Britney Spears impression on national television, and his dance moves often pop up in his stand-up routines. He grew up singing hymns in church thanks to his minister parents ("The rest of it, I was so bored and angry"), performing in school musicals, and singing in show choir.

Early's favorite characters to play are the ones who do a fair bit of performing themselves — "deluded, self-absorbed, manic characters" like Search Party's Elliott, who is "always posturing." The genius of Search Party is in its cutting satire of its millennial characters, all of whom prefer to see themselves as victims rather than perpetrators, even when they've committed or are accomplices to an actual murder. "Search Party has a kind of ruthlessness and danger to it in its depiction of privilege," Early says. "It's not didactic... it doesn't hold your hand through it."

Playing Elliott is certainly fun, but there's a little danger in that, too. "It's so comfortable for me that I'm like, This is disturbing," Early says. "Like, Please God, I pray that none of this has actually rubbed off on me in a deep psychological way." At least, nothing except the dance moves.

More like this
The Kardashian Forerunners
By Mariah Smith
At 14, Vanessa Bayer Was Bad At Sports & Lusting Over Jared Leto
By Samantha Rollins
Cat Burns’ Lyrics Will Make You *Feel* Things
By Rowena Henley
Pete Davidson & Kate McKinnon Are Part Of A Reported Major SNL Cast Shakeup
By Brad Witter
Get Even More From Bustle — Sign Up For The Newsletter