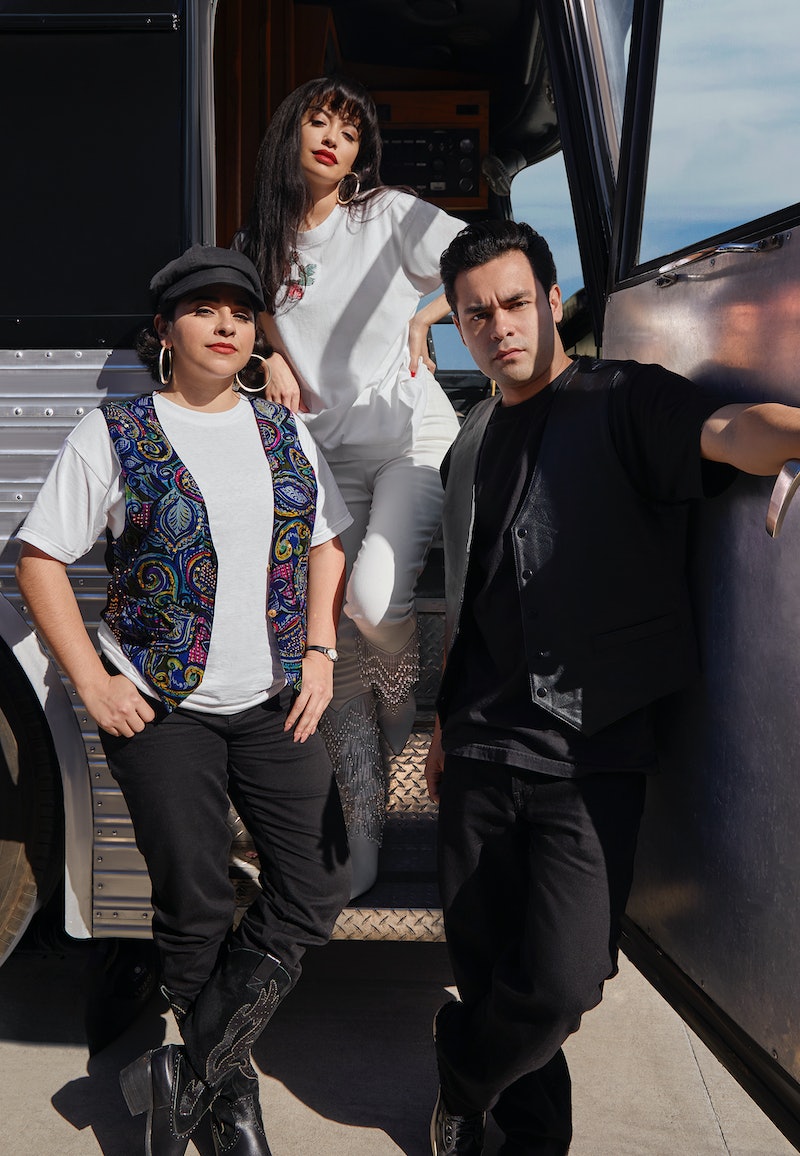 In the 25 years since Selena Quintanilla's death, her sister sister Suzette has worked tirelessly to memorialize her. She helped to open a museum at Selena's old studio, created a Selena MAC cosmetics line, and co-produced the new Netflix biographical drama Selena: The Series.

"Selena will always have a lasting place in music history and we feel great responsibility to do justice to her memory," Suzette wrote in a 2018 Instagram post about the Netflix show. "With this series, viewers will finally get the full history of Selena, our family, and the impact she has had on all of our lives."

Suzette was born June 29, 1967 as the second child to Abraham and Marcella Quintanilla. A former musician, Abraham created the band Selena y Los Dinos when his youngest daughter, Selena, showed an aptitude for music. Suzette played the drums in the band, and they often performed for dinner entertainment at their family restaurant Papagayos. When the restaurant shut down, Selena y Los Dinos hit the road, growing what would eventually become an avid fanbase for Selena.

Selena was the face of the band, but according to Joe Nick Patoski's 1996 book Selena, it was Suzette who became the band's leader. Though Selena was nominated for a Grammy Award by 1995, Suzette remembered the Selena who existed outside of the spotlight. "A memorable moment I always go back to is all the time that I spent in the bus with her," Suzette told Pop Sugar in 2018. "We spent more time in the bus than we did at home. Late nights after the gigs, she would wipe off her makeup, she would eat something, and then she would come and crawl in our bunk and we would just talk. About her makeup line, her dreams, her being a mother, her being married to Chris — just about life, what families and what sisters normally do."

Selena was shot and killed on March 31, 1995 by Yolanda Saldívar, the manager of Selena's boutiques. As Suzette told Patoski, she was wracked with guilt because she was the one who introduced Yolanda to Selena, but she set aside her feelings to help her grieving parents manage Selena's estate. She then helped to turn the boutique into a souvenir shop for fans who wanted to visit Corpus Christi and pay homage to Selena. Though the family was accommodating, sometimes it became too much for Suzette. "It got hectic, a lot of people coming in and crying and showing their grief," she told Entertainment Weekly in 1995. "It depressed me, it really did. So now I'm running it, but I don't go in every day."

Eventually, Suzette and her family created the Selena Foundation and released two different MAC makeup collections under the name Selena La Reina. Suzette helped to publicize Selena getting her own star on the Hollywood Walk of Fame and a wax figure at Madame Tussauds. She also works with up-and-coming Tejano artists through the family's company, Q-Productions.

Today, Suzette continues to share her sister's legacy, including working on Netflix's Selena: The Series. In the show, Suzette is played by Noemí González, who was aware of the weight of portraying the person producing the show. "I definitely felt a sense of pressure," she told Elite Daily. Ultimately, though, she realized she just needed to tell the Quintanillas' story as best she could. "I''m just playing a life experience of Suzette. That's my job. I made sure to remove anything that wasn't serving that right off the bat."

More like this
Watch The Thrilling Teaser Trailer Of 'Shadow And Bone' Season 2
By Gretchen Smail, Jack Irvin and Sophie McEvoy
Mike Flanagan Teases 'The Midnight Club' In This Exclusive, Creepy Clip
By Grace Wehniainen
Twitter Is Pouring Out Some Zhampagne As ‘Schitt’s Creek’ Leaves Netflix
By Brad Witter
Jeffrey Dahmer’s Arresting Officer John Balcerzak Got His Job Back After Being Fired
By Grace Wehniainen
Get Even More From Bustle — Sign Up For The Newsletter