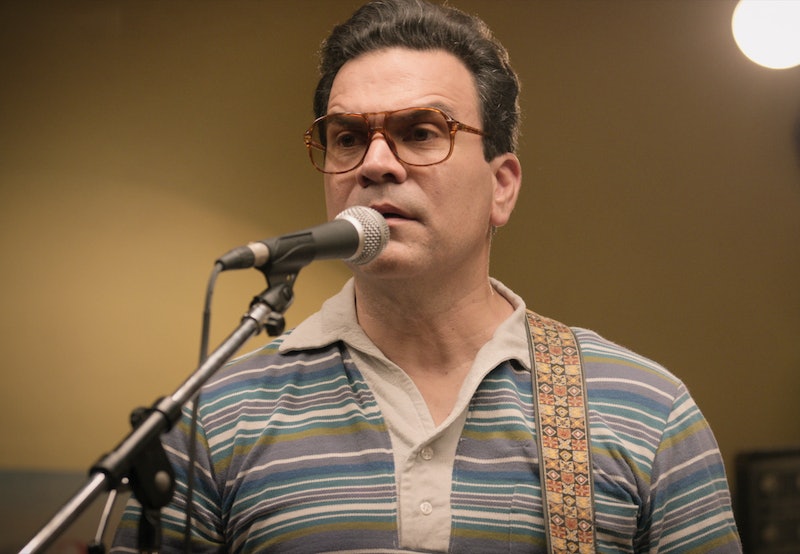 A beloved '90s pop star before her untimely death, Selena Quintanilla had a meteoric rise to stardom. As shown in Netflix's biographical drama Selena: The Series, her path to success was paved by her family —and chiefly her dad, Abraham Quintanilla Jr. Abraham was a passionate musician in his own right, and he helped to foster Selena's talents from a young age.

According to Joe Nick Patoski's 1996 biography Selena Como La Flor, Abraham Quintanilla was born and raised in Corpus Christi, Texas alongside six siblings. His ancestors came from Mexico as migrant farm workers, and like many children of immigrants, he had a blended upbringing. He spoke Spanish at home, but learned English in school. And though was proud of his Mexican roots, he also aspired to have the so-called American Dream — one that involved becoming a professional singer.

Quintanilla attended Roy Miller High School and joined the Los Dinos, a singing group created by his friends Bobby Lira and Seferino Perales. They sang at parties and functions, and soon Quintanilla encouraged them to charge for their performances. Quintanilla eventually dropped out of school to pursue his musical career, something his parents deeply disapproved of. The Dinos added pianist Joe Robles, bass player Tony Gallardo, and an entire instrumental section to the band. They learned to incorporate upbeat doo-wop and rock-and-roll into their music, and rode the thriving Tejano music wave of the 1950s.

They eventually approached KEYS radio disc jockey Charlie Brite about making a record. "They did these four part harmonies in three parts that I couldn't believe," Brite told Patoski. He said Perales was the star as the lead singer, but Quintanilla was impressive as well. They recorded "So Hard to Tell" in the studio, and the single was released on the J.W. Fox label. It became a classic hit on KEYS radio in Corpus Christi, and the band became local heroes who were often booked at concerts and sock hops. The Dino's second single "Give Me One Chance," had even more success, getting airplay throughout South Texas.

The band recorded 10 singles in all, but prevalent racism made it difficult to grow their career. Club owners would turn them away once they saw that they were Mexican, and they were often denied motel rooms that other booked performers got. Quintanilla was drafted in October 1961, and he met his wife Marcella Samora while on duty. They got married in June 1963 and he was discharged six months later. Though he picked back up with Los Dinos, it wasn't the same. Their Tejano music struggled to find an audience, and in 1969 Quintanilla quit the band to focus on Marcella and his two kids, A.B. and Suzette.

In the early 1970s, Quintanilla moved to Lake Jackson to work for Dow Chemical. On April 16, 1971, Selena was born, and she showed an aptitude for music by the time she was six. “Her timing, her pitch were perfect,” Quintanilla told People in 1995. “I could see it from day one.” Unable to pursue his own music anymore, Quintanilla poured his time into shaping Selena's gifts. He started up a new band for his three kids called Selena y Los Dinos and helped Selena to record songs.

In 1980, Quintanilla left his Dow Chemical job and opened Papagayos, a Mexican restaurant where Selena y Los Dinos performed for dinnertime entertainment. But the restaurant was only open for about a year before the Quintanillas fell on hard times and lost the restaurant and their home. So Quintanilla took Selena y Los Dinos on the road to perform at various events. Through these performances, Selena built a fanbase. Quintanilla continued to push Selena to perform and record, and it wasn't long before she became one of the bestselling female Tejano music artists ever.

"He was the ultimate stage father," radio host Mike Chavez told Patoski. "He had so many doors shut in his face, but he wouldn't take no for an answer. How many times was he told [Selena] had no talent? He handled her career, he kept her clean, even if he came off as rough, difficult to work with."

On March 31, 1995, Selena was murdered by Yolanda Saldívar. Quintanilla was devastated, but in the wake of her death, he continued to share his daughter's legacy. He helped to co-produce the 1997 film Selena, created The Selena Foundation, and opened a Selena museum in Corpus Christi. Most recently, he finished writing his own autobiography with the help of Selena co-producer Nancy De Los Santos. "Since my daughter Selena died I [have] been wanting to write a book," he wrote in a Feb. 27 Facebook post. There's no set release date for the book yet, but in the meantime Quintanilla is serving as a co-producer on Netflix's Selena: The Series alongside his daughter Suzette.

More like this
Where Is Lionel Dahmer Today? Jeffrey Dahmer’s Father Reflected On The Serial Killer’s Death In 2020
By Brad Witter
'Firefly Lane' Season 2 Will Be The Show's Last — But There's A Twist
By K.W. Colyard and Grace Wehniainen
Twitter Is Pouring Out Some Zhampagne As ‘Schitt’s Creek’ Leaves Netflix
By Brad Witter
Jeffrey Dahmer’s Arresting Officer John Balcerzak Got His Job Back After Being Fired
By Grace Wehniainen
Get Even More From Bustle — Sign Up For The Newsletter