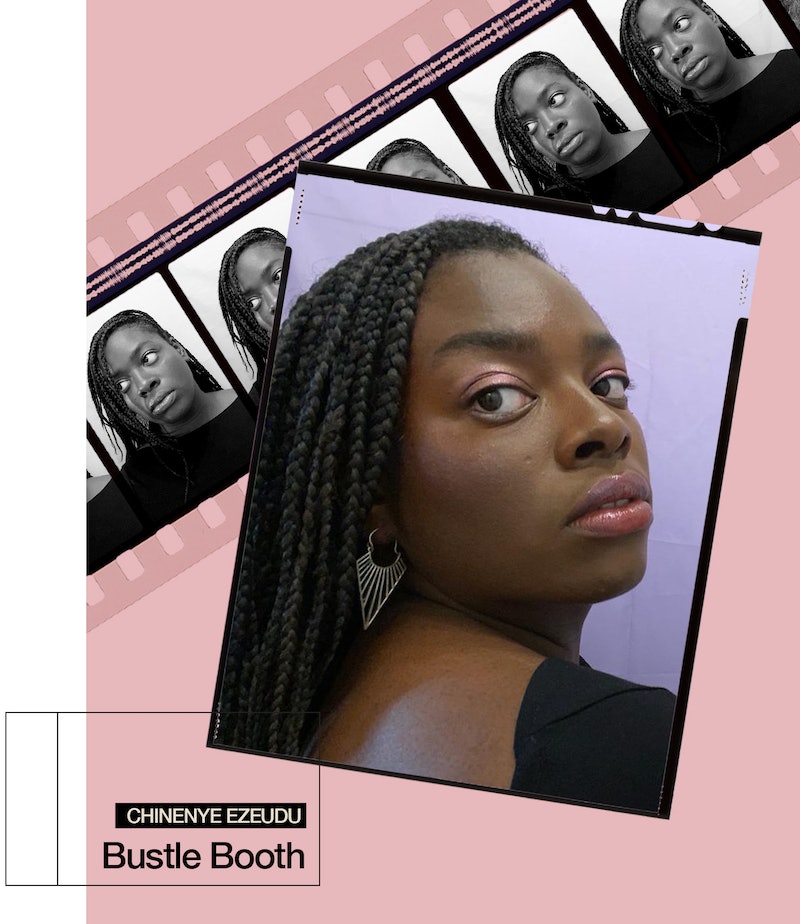 Sex Education star Chinenye Ezeudu can recall the very moment she wanted to become an actor. “I was in this play in Primary School called Hoxton Gollum playing a professor and wearing this crazy big afro,” she laughs. “I knew from that moment I wanted to do this for the rest of my life.”

The 25-year-old Londoner went on to apply for drama school three times only to be rejected. But, as she tells it, the disappointment “opened her up” for her breakthrough role on Season 2 of Netflix’s hit drama, Sex Education, where she plays Moordale High School’s best student, the exceptionally intelligent, Vivienne Odusanya.

“I wish I was as smart as Viv — I’d do all my taxes myself,” she laughs, revealing that reciting Viv’s impressive info-heavy monologues can sometimes take a couple of tries.

While, unlike her character, she can’t reel off statistics at the drop of a hat, Chinenye says there was something about Viv’s determination that she “really related to.”

“Viv is wanting to go to Oxford or Oxbridge, and will go through any lengths to get there and I think we really see that this season,” the actor shares. “She really struggles with doing the right thing. It’s hard to be a Black girl trying to succeed in a world that doesn’t want you to succeed. So I get why she’s so driven and motivated.”

Sex Education Season 3 drops September with exciting new cast members such as Girls’ Jemima Kirke in the mix. Chinenye teases that Sex Education’s “unflinching” portrayal of sex will continue, although viewers will see Viv grapple with a lot of “shame” in the new series.

“Viv becomes Head Girl this season and works closely with Jemima Kirke’s character headmistress Hope who’s trying to transform the school. What else can I tell you? She has a new boyfriend, you’ll see the perils of that,” she teases.

When Sex Education fans last saw the “straight-up” Viv’ in Season 2, she was supporting her classmates through difficult themes such as panic attacks and sexual assault. For Chinenye, she believes it’s important for young people to see someone their age who is “kind.”

“When I think back to when I was a teenager, there wasn’t that much conversation about sex,” she shares, praising Sex Education’s unfiltered storylines.

Off the back of a dream role with Sex Education, Chinenye is already stuck into her next projects including Silent Roar, a teen film that tackles grief and is set in the Isle of Lewis. The actor tells me that she’s also working on her own writing, which she hopes will catch the eye of big directors — in fact, she’s manifesting it.

“I’ve put it on my vision board,” she tells me. “I know what I want to do and I will get there. It may not be an easy path but I’m willing to go there.”

I have none saved. What will be will be and I’m still going out come rain or shine.

“You talking to me?” [From Taxi Driver]

The Grim Adventures of Billy and Mandy or Courage the Cowardly Dog. Honourable mention goes to Danny Phantom.

Goodfellas and The Boys.

So many to chose from

I’m currently in the Isle of Lewis and the scenery is really inspiring me.

“Look at that peng ting with the huge batty.”

More like this
Keyla Monterroso Mejia Is Finally The Star Of The Show
By Gabrielle Bondi
'That '90s Show' Star Callie Haverda Got Advice From Mila Kunis & Ashton Kutcher
By Brad Witter
Con O'Neill Was Connected With Sarah Lancashire Long Before 'Happy Valley'
By El Hunt
'Bridgerton' S3 Will Show A *Very* Different Side To Kanthony
By Sam Ramsden
Get The Very Best Of Bustle/UK
Sign up for Bustle UK's twice-weekly newsletter, featuring the latest must-watch TV, moving personal stories, and expert advice on the hottest viral buys.