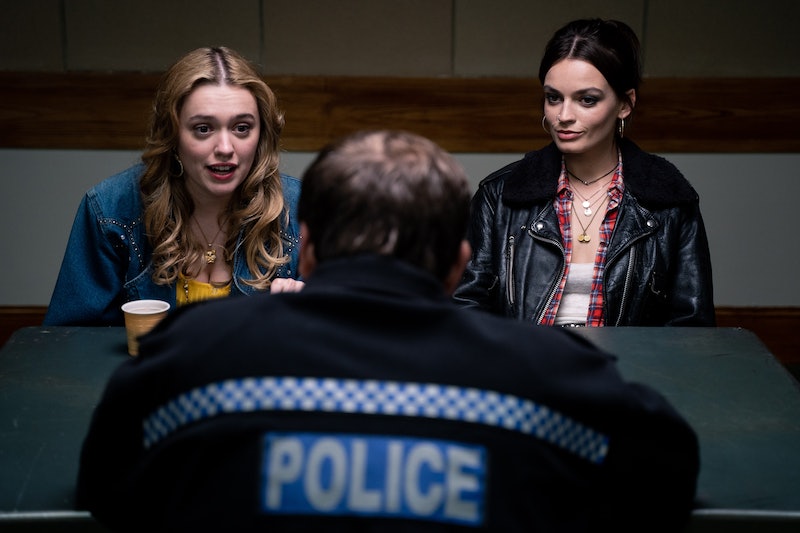 One would be forgiven for thinking a show entitled Sex Education is just a raunchy American Pie-esque romp, but every season the show proves to be a sensitive exploration of teen sex, identity, and orientation — and in Season 2, Sex Education addresses sexual assault and harassment head on. After Aimee is sexually assaulted on the bus — a man jerks off behind her and then ejaculates on her jeans — the season shows how damaging the incident is, however inconsequential it may seem. As Aimee says, "I'm angry that a horrible man ruined my best jeans, and nobody did anything, and now I can't get on the f*cking bus."

The man who assaults Aimee doesn't fit the bill of who society typically views as a sexual predator — and that's absolutely purposeful. He doesn't have a trench coat, or greasy hair, and in fact Aimee describes him as having a "kind face." When Aimee realizes with horror that he's masturbating against her, she panics and attempts to draw attention to it, but it appears that nobody believes her. So she flees the bus, and only with Maeve's support does she go to the police. She tries to downplay the whole incident — maybe it's not really a big deal, and law enforcement surely has bigger fish to fry. But the cops immediately reassure Aimee that what happened to her is sexual assault, and that it is absolutely something to be taken seriously. (Here, fiction and reality could not be further apart, as women are often disbelieved by cops, which is why sexual assault has such a low reporting rate.)

Though Aimee goes to the police and they're able to draw DNA evidence from her pants, the incident is imprinted on her memory. Suddenly it affects the way she moves in public, and the kind of schedule she keeps. The formerly bubbly Aimee suddenly doesn't feel like she can do something as simple and necessary as using public transit. She changes her outfits to accommodate running shoes; she walks everywhere, even if it takes her hours; she panics when her boyfriend tries to initiate sex. If the normal and "kind" looking man on the bus "could do something like that, anybody could," Aimee quietly explains to Maeve and the rest of the girls. "I always felt safe before. And now I don't."

For many female viewers, Aimee's story will likely strike a chord. It certainly rings true for creator Laurie Nunn, who tells Bustle that Aimee's story is "something I brought from my own life, and the realization that it’s not an uncommon story."

"I think that another layer to the conversation is about just how it feels to be female and moving through the world when you don’t feel entirely safe all the time. From a very young age women are sort of taught to feel scared, and taught to feel afraid," Nunn says.

As Nunn explains, "most women you meet have had some kind of experience like that happen in the world — I don’t know any of my girlfriends who haven’t had something like what happened to Aimee on the bus happen to them. Maybe not as bad as that, but in the same realm."

In Episode 7, each of the teen female characters in Sex Education share how they've all been assaulted, harassed, or made uncomfortable by men, and how it's affected their ability to move freely in public. Olivia was groped on the train, so sometimes she "feels funny in crowds too." Maeve was catcalled as a child; an adult woman tells her its her fault for wearing short-shorts. Vivian was barred from going to the pool by her mom after a man flashed his penis at her. And a man follows Ola from the park at night, until he spots her dad waiting on the porch. As Vivian says, "statistically, two thirds of girls experience unwanted sexual attention or contact in public spaces before the age of 21."

"The #MeToo movement, which is obviously amazing, has brought so much to the surface about power dynamics," Nunn tells us. "I think that another layer to the conversation is about just how it feels to be female and moving through the world when you don’t feel entirely safe all the time. From a very young age women are sort of taught to feel scared, and taught to feel afraid. That was something that I wanted to explore in the show."

Sex Education explores the issue with a delicate touch, without shying away from showing how traumatized Aimee is from the incident. She cries at odd times; she's unable to admit to her mom what happened (like it's somehow her fault); at one point she manages to get on the bus, but she briefly hallucinates her attacker and it scares her right off.

"Aimee was — it sounds horrible to say it — but she was the right character to do it with," Nunn explains. "Because she is such a funny, open, bright sort of person, and we watch her lose her innocence and realize that the world isn't as you know safe as she thought it was, which is something that sadly I think a lot of women can relate to."

It's in this way that Sex Education also acts as an education for the audience: Season 2 demonstrates how moving through the world as a young woman can often be a scary and dehumanizing experience, which is why open conversations around consent and assault are still so vital. Though it's a fictitious and lighthearted show compared to something like Unbelievable, Sex Education still tackles a heavy issue with surprising deftness. By the time all the girls take a sledgehammer to the junkyard and scream about the injustices of being a woman in a patriarchal society, it's likely the audience is feeling some of their fury too.

More like this
Grammys Host Trevor Noah Made Adele's Dream Of Meeting The Rock Come True
By Brad Witter
'The Last Of Us' Episode Schedule Competes With The Super Bowl & Oscars
By Brad Witter
Pedro Pascal Barely Got Through The "Lisa From Temecula" 'SNL' Sketch
By Stephanie Topacio Long
Melanie Lynskey Plays A “Ruthless Leader” In 'The Last Of Us'
By Brad Witter
Get Even More From Bustle — Sign Up For The Newsletter
From hair trends to relationship advice, our daily newsletter has everything you need to sound like a person who’s on TikTok, even if you aren’t.