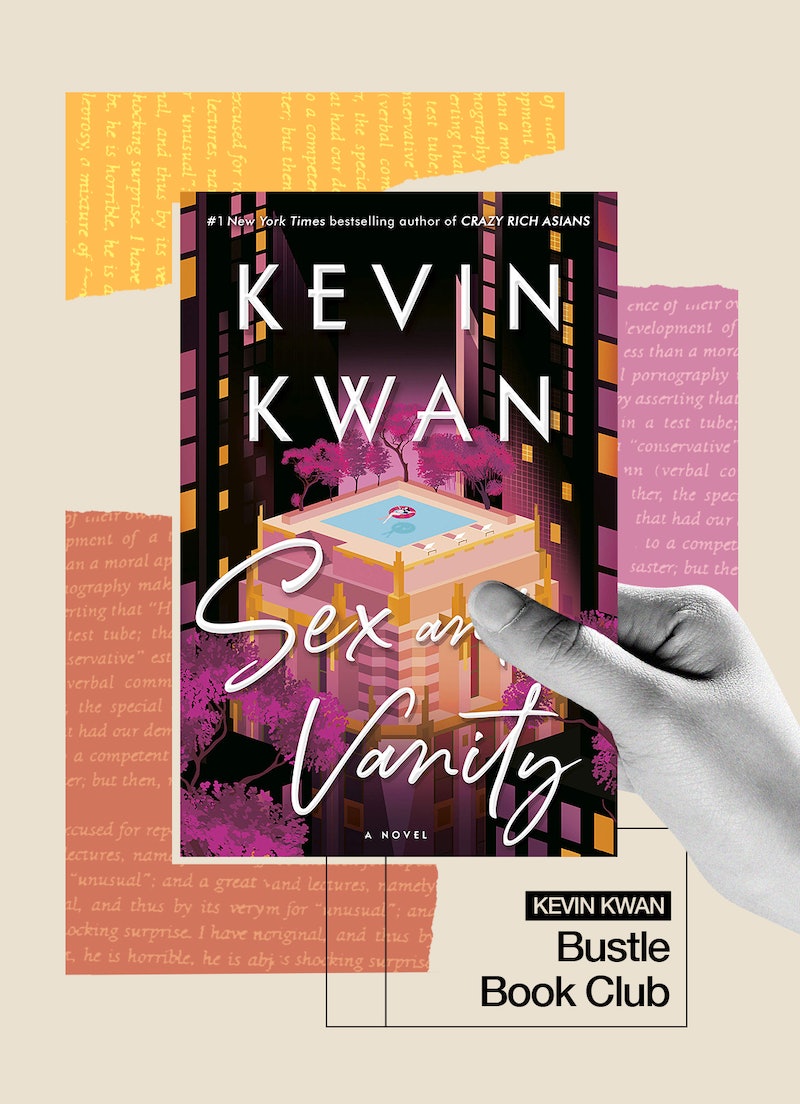 Kevin Kwan keeps a single sticky note on his laptop that reads “joy.” “I've experienced so much trauma and grief in my life that my focus became, ‘How can I turn that into comedy?’” Kwan tells Bustle. “I managed to find the humor [through writing]. Joy has become kind of like my life's mission.” The Crazy Rich Asians author’s preferred method of spreading it is through his deliciously opulent fictionalized accounts of Asia’s elite.

Kwan’s latest novel Sex and Vanity — his first follow-up to the CRA trilogy, which spawned a film adaptation that grossed over $200-million worldwide — is a retelling of E. M. Forster’s A Room With a View. In Kwan’s hands, the classically white, British tale’s setting gets an update from the early 1900s to the 2010s, trading in a cast of characters from England’s stuffy upper crust for one of lavish, jet-setting Asian socialites. And in traditional Kwan fashion, Sex and Vanity takes place during a whirlwind, weekend-long wedding (this time in Capri) where protagonist Lucie Churchill unwittingly falls for the aloof George Zao.

It’s a story Kwan has wanted to tell for over 10 years, but amid a global pandemic and a nationwide reckoning with institutionalized racism, will readers have the same appetite for such luxurious escapism? “We live in a very crazy, tragic world, but as human beings, we all need a release valve at times,” Kwan counters. “You have to find some laughter through the tears, right? I think that's even more important now.”

Ahead of Sex and Vanity’s release, Bustle spoke with Kwan about his Bravo habit, Italian movie soundtracks, and his recurring nightmare.

On his reality TV obsession:

My number one addiction is Below Deck. It's just this very simple show about a bunch of people on a ship trying to deal with the challenges of running a charter boat. It's interesting to see how an expert team is trying to meet the needs of these demanding [guests], and at the same time having their own drama fueled by living in tiny cabins for like six weeks together on a boat. It's definitely very Upstairs, Downstairs. You end up seeing some lovely people as well as some obnoxious ones. Human nature fascinates me in all its shapes and forms.

On how he beats writer’s block:

Just the fear of not meeting a deadline quite honestly is a great motivator for me to get out of a rut. There's this little obedient student in me that never wants to miss a deadline. I have recurring nightmares every year like, "Oh my God, I didn't turn this paper in. I won't graduate!" I still haven’t missed a deadline because I’m so afraid of the consequences.

On how he curates his creative space:

Environments are very, very important to me. I love surrounding myself with lots of old things. I arrange different table-scapes depending on the book. For this book I had some scattered photos all over the table in front of me. There's one in particular that's this black and white, old postcard of the inside of the Blue Grotto [in Capri], and I have it in this really old art deco frame. There’s an old metal paperweight that has an old Chinese carving on it that was my grandmother's. This book is such a mix of East and West. I wanted to also be reminded of Lucie's Chinese heritage at all times, so the table's a mixture of little antiques from Asia, and there's a dose of Italy, the beach, and the water.

On finding inspiration in Italian soundtracks:

For the wedding scene in Capri in [Sex and Vanity] I really went to great [lengths] to choose the music. Every song that's played at Isabel's wedding is inspired by an Italian movie soundtrack. When the family first emerges, it's the theme from Il Postino. There’s Ennio Morricone's love scene from Cinema Paradiso. I also listened to those songs while writing it, and it really helped me with that scene.

More like this
Candice Brathwaite Is Over Using Her Own Life For Material
By Shahed Ezaydi
The Biggest Differences Between 'Bullet Train' & The Book It’s Based On
By Arya Roshanian
Emma Mackey *Is* Emily Brontë In The First Trailer Of The Biopic
By L'Oréal Blackett and Sam Ramsden
10 Must-Read New Books Out This Week
By K.W. Colyard
Get Even More From Bustle — Sign Up For The Newsletter