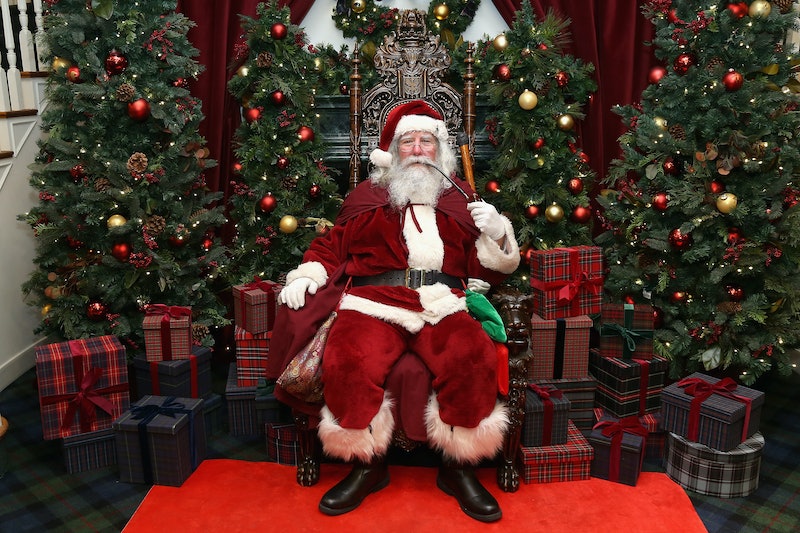 Many of the traditions surrounding Christmas are for children, since Santa Claus delivers presents for kids on the night of every December 24. But that hasn't stopped adults from creating Christmas songs that make Santa sexy. While the Santa Claus tradition at Christmastime should be about the innocence of children, musical perverts have been making Kris Kringle downright dirty for decades. Even when these depraved songs aren't literally about getting down with Santa, they manage to sexualize every aspect of Old Saint Nick — from him landing on your rooftop to the milk and cookies you leave out for him.

There are plenty of songs about Christmas that turn uncomfortably sexual, with the most notable (and, perhaps, most problematic) example being "Baby, It's Cold Outside." But, thankfully, many of these more "romantically-inclined" songs focus on two people making love by the light of the Christmas tree — not someone trying to get it on with the fictional spirit of the holiday that brings joy to children around the world. (It's like they don't even care that Santa's happily married!)

Regardless of how it might disturb you, some musical artists are unafraid of the judgment that may come along with singing about Santa in a sexual way. So, listen to these songs that manage to sexualize the Santa Claus tradition — and you're guaranteed to never think about Christmas without blushing ever again.

Lots of artists have covered this song over the years, but Jessica Simpson's spin particularly makes you remember how truly weird lines like, "I saw mommy tickle Santa Claus / Underneath his beard so snowy white" are.

Not to be confused with "Santa Claus Is Coming To Town," Elvis Presley sings, "Well, you be a real good little girl / Santa Claus is back in town" and "Hang up your pretty stockings and turn off the light / Santa Claus is comin' down your chimney tonight."

Some songs are sneaky with their sexual references to Santa, but Rufus Thomas' song makes no bones (ahem) about it with the opening lines, "I'll slide down your chimney / And bring you lots of joy / What I got for you, mama / It ain't just a toy." Actually, just (don't) do yourself a favor and take in every lyric of this hypersexual Christmas song.

4. "I've Got Some Presents For Santa"

Another song that isn't even trying to be subtle when it comes to Santa is this jazz tune from Sarah Taylor and Bill Mumy. Taylor sings, "I've got some presents for Santa / And he's got a big one for me / Outside, it snows / I take off all my clothes / And wait for Santa underneath my tree." Considering she goes on to sing about Santa squeezing into her "hot chimney," this is another one you should probably just listen to thoroughly on your own.

When Ariana Grande sings, "Are you down for some of these milk and cookies? / Down for loving?", she manages to sexualize the innocent practice of leaving food out for Santa.

Clarence Carter has never shied away from sexually explicit lyrics — he is the man who sings "Strokin,'" after all — but he gleefully sexualizes Old Saint Nick in "Back Door Santa" with lyrics like, "I ain't like the old Saint Nick / He don't come but once a year."

The fact that Santa comes down the chimney makes allusions to him ripe for sexual innuendo since AC/DC sings, "I can hear you coming down my smokestack" at the end of this song about a man wanting (what else?) a mistress for Christmas.

8. "Santa Claus Got Stuck In My Chimney"

It doesn't take much imagination to interpret this Ella Fitzgerald song as super dirty with the lyrics, "Santa Claus got stuck in my chimney / When he came last year." But you really only have your mind being in the gutter to blame, since the song's intention seems innocent enough.

Why is Justin Bieber singing about landing on top of your roof? Sure, he's singing to a girl, but there's something unsettlingly about lyrics like, "You leave some cookies out, I'mma eat 'em all."

Amos Milburn wants to be your Santa Claus since he wants to "slide down your chimney / Fill your stockings full of toys" around midnight. And his offer to ride his reindeer doesn't seem quite so innocent.

When Alison Krauss sings, "All I want for Christmas, darling, is to be with you," the object of her affection is good old Father Christmas. She sings, "I watch you shimmy down the chimney, baby / I watch you fill up my stocking," so how can she resist?

Unlike "I Saw Mommy Kissing Santa Claus," Albert King really is singing about Santa getting it on with your mom with the lyrics, "Now Mama's in the kitchen cookin' / And the children are fast asleep / It's time for old Santa Claus / To make his midnight creep 'cause / Santa Claus wants some lovin.'" Bill Murray and George Clooney memorably covered this delightfully dirty ditty in A Very Murray Christmas.

Steel Panther asks if you "wanna get some Christmas inside of you?" and that's perhaps the tamest lyric in this entire song, since there's a line about eggnog that will scandalize just about anyone.

"Santa Baby" is the epitome of getting sexual with Santa, since Eartha Kitt seductively asks Santa for presents. And even if the line "Come and trim my Christmas tree" wasn't originally meant to be graphic, it has taken on a whole new meaning for modern listeners.

After listening to these Christmas songs, you'll have rosier cheeks than Santa Claus and are pretty much guaranteed to be on the naughty list by association. Happy, creepy holidays.

More like this
After 'Heartstopper' Used This Indie Artist’s Song, Streams For It Soared 8,000%
By Alyssa Lapid
How 2 'American Idol' Singers Performed With COVID-19 & Made It Into The Top 5
By Jake Viswanath
Tulisa From N-Dubz Has Worked With Some Unexpected Musicians
By Maxine Harrison
Jennifer Lopez Found The Perfect Ben Affleck Throwback Video For Mother’s Day
By Stephanie Topacio Long
Get Even More From Bustle — Sign Up For The Newsletter