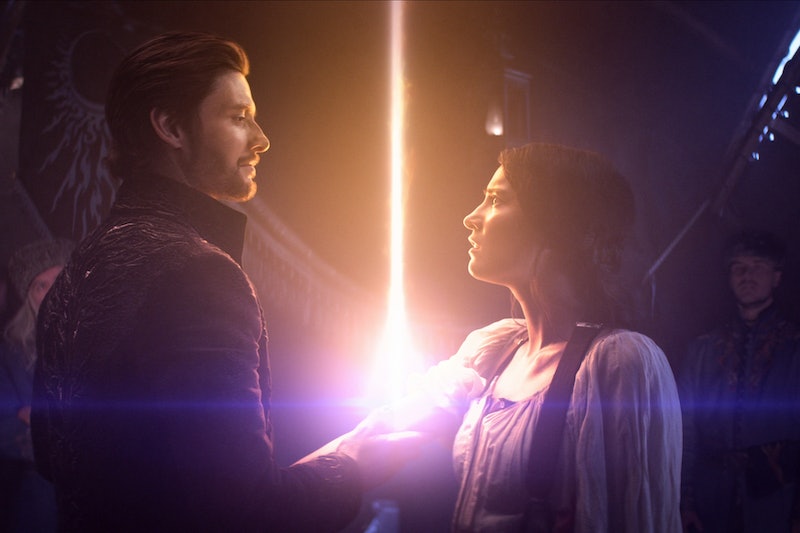 Bardugo’s Shadow and Bone trilogy — Shadow and Bone, Siege and Storm, Ruin and Rising — centers on Alina Starkov, a cartographer in Ravka’s First Army. Alina’s Grisha powers are revealed when her first journey across the Shadow Fold — a dangerous swath of monster-infested land that cuts across the heart of Ravka — goes off the rails. As it turns out, Alina is a Sun Summoner: a rare and powerful type of Grisha who might just be able to destroy the Shadow Fold and reunite the two halves of Ravka for good.

That revelation thrusts Alina into a complex game of politics, most of which concern her new working relationship with the Darkling (also known as General Kirigan), the powerful leader of the Second Army. Not only is the Darkling a rare kind of Grisha — a Shadow Summoner — but he’s also an amplifier: a Grisha who can enhance others’ powers. His fate is inextricably linked to the Shadow Fold as well.

Here’s everything you need to know about magic in Shadow and Bone:

What Is “Small Science”?

First thing’s first: magic isn’t called “magic” in the Grishaverse. Instead, Alina and the other Grisha call their practice “small science.”

Small science follows many of the same rules that govern physics in our own world, including the first law of thermodynamics, which states that matter and energy cannot be created or destroyed. Most Grisha specialize in manipulating pre-existing matter in one particular way. Generally, they learn to work with the essence of matter — its etovost — at the Little Palace before they take their place in the Second Army. (Ravka’s First Army is made up of those without magical powers, while Grisha are in the Second Army.)

“Small science [is the] idea of manipulating matter at its most fundamental levels,” Bardugo says. “It's essentially a souped-up first-year molecular chemistry. So you have Grisha who can control the elements, but who cannot make matter out of nothing.”

The Etherealki include Inferni, Squallers, and Tidemakers — Grisha who control fire, wind, and water, respectively. This Order also includes Sun and Shadow Summoners, such as Alina and the Darkling, who control light and darkness.

Healers, Tailors, and Heartrenders make up the Corporalki. Healers repair broken bones and close open wounds. Tailors change people’s appearances, giving them different eyes, hair, tattoos, or facial features — but only for a short while. Heartrenders control organs and emotions to kill and manipulate their targets.

Finally, there are the two types of Materialki, Durasts and Alkemi, who are usually just called “Fabrikators.” These Grisha work with things like metal, glass, and fabric, as well as plants and toxins.

A forbidden, dark magic exists in the Grishaverse, as well. Known as merzost, it functions differently from ordinary Grisha powers: it can create matter out of nothing and destroy it completely. Merzost created the Fold and its monsters, but using it comes at a steep cost. Few Grisha are willing — or able — to perform it.

Bardugo says that laying out the differences between that kind of magic and ordinary Grisha powers was key in creating the Grishaverse’s magic system.

“For me, the thing that was most exciting was to then create a dividing line,” she tells Bustle, describing “our conception of magic” as “the forbidden, the taboo, the creation of matter, the animation of matter, what looks like magic and folk and fairytales, as opposed to the small science, which connects people more deeply to the world that doesn't exact the same price.”

What Makes Alina And The Darkling Different From Other Grisha?

Alina and the Darkling are both rare types of Etherealki. Believed to be the only Grisha of their respective types, they find that their powers are frequently misunderstood and maligned by others in their Order.

But while the Darkling is believed to descend from a long line of Shadow Summoners, Alina is the first Sun Summoner ever to exist.

What’s Up With The Fold?

Let’s talk a little bit about this unique feature of Ravkan geography. This lightless place home to a number of vicious creatures, including the volcra — flying monsters that attack unprepared and unlucky travelers. However, because it stretches across Ravka, from Shu Han in the south to Fjerdan in the north, Ravkans have no choice but to cross the Fold. Many of the country’s most important cities, including its capital, lie east of the Fold, but all of its ports — and therefore, most of its trade — are on the other side, in West Ravka.

Alina doesn’t learn the truth about the Shadow Fold until much later in Shadow and Bone, when her teacher, Baghra, reveals that the Darkling is her son, the Black Heretic himself, who intends to use the Fold as a weapon to bring the world under his control.

Why Does The Darkling Want To Kill The Stag?

For much of Shadow and Bone, Alina has trouble tapping into her Grisha powers without being near the Darkling. She needs an amplifier that can always be at her side, and the Darkling believes he’s found the perfect specimen in Morozova’s Stag: a powerful, one-of-a-kind creature that is rumored to be as old as the world itself. If the Darkling can make the Stag’s antlers into a necklace for Alina, she will be one of history’s most powerful Grisha.

As you might expect, the leader of the Second Army isn’t being altruistic when he concocts his plans for Alina’s new amplifier. He has a particular task in mind for the Sun Summoner, one that will allow him to control the entire Shadow Fold.

Although the Darkling created the volcra when he made the Fold, they do not recognize him as their master. He needs Alina to destroy them if he is to traverse the darkness freely. Giving Alina the Stag’s antlers won’t just allow her annihilate all life in the Fold, Baghra tells her, but will also allow the Darkling to control her powers for himself.

Baghra’s revelations about the Darkling and the Shadow Fold leave Alina with no choice but to flee to West Ravka, away from the small science lessons of the Little Palace, and do whatever it takes to stay one step ahead of the Second Army.

More like this
Netflix Shut Down 'Bridgerton' S3 Rumours About A “Very Dark” Storyline
By Bustle
'Wednesday' Star Emma Myers Thinks A Wenclair Storyline Is “Possible” In Season 2
By Alyssa Lapid
'The Queen’s Gambit' Season 2 Tweet Wasn’t From Anya Taylor-Joy
By Mary Kate McGrath, Jack Irvin and Grace Wehniainen
Ashton Kutcher Wants Danny Masterson “To Be Found Innocent” In Rape Retrial
By Jake Viswanath
Get Even More From Bustle — Sign Up For The Newsletter
From hair trends to relationship advice, our daily newsletter has everything you need to sound like a person who’s on TikTok, even if you aren’t.