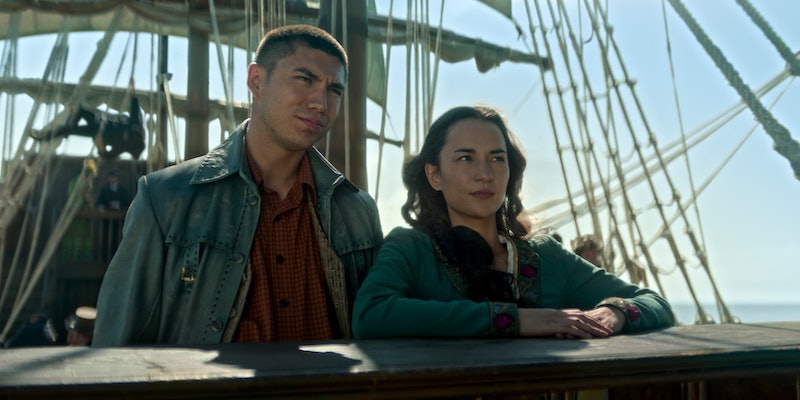 Based on a series of YA novels by Leigh Bardugo, Netflix’s Shadow And Bone is a world rich in fantastical characters and lore. The show follows cartographer turned Sun Summoner Alina Starkov, her best friend Mal, and the criminal gang The Crows. While the series closely follows the events of Shadow And Bone — whilst weaving in the characters from Bardugo’s later series Six Of Crows — fans of the book know that Season 1 is hardly the end of Alina’s story. In fact, it’s just the beginning of a trilogy that sees her traveling all across her country of Ravka as she figures out how to close the shadowy Fold and outwit the mysterious Darkling.

On June 7, 2021, Netflix announced that Shadow And Bone would be back for an eight-part Season 2. Showrunner Eric Heisserer initially pitched the show as at least three seasons, just like the trilogy of Shadow And Bone books, so we know the creative team has been prepared for a renewal.

Speaking to Netflix about the series being picked up for Season 2, Heisserer said: “I’m honored and thrilled to return to the Grishaverse and continue the stories of these endearing characters, particularly Milo.” Bardugo also gave a quote to the streaming service alongside the new season announcement. “I’ve been writing in the Grishaverse for nearly ten years now, so I’m thrilled we get to keep this adventure going,” said the author and executive producer. “There are so many places that we’ve barely gotten to visit, and I can’t wait to introduce our audience to more of the saints, thugs, thieves, princes, and privateers who make this world so much fun to explore. It’s going to be real magic to see our brilliant, talented cast expand.”

Following this exciting update, here’s everything we know about Season 2 so far.

“The most wonderful thing about Season 2 is that we get to advance the story of these characters that we’d left in precarious positions at the end of Season 1,” hinted showrunner Eric Heisserer in a press release.

“There’s a lot of potential for them this season. They have to face the consequences for their actions, and then they get to meet new people along the way,” he continued. “The Grishaverse also expands in this season, both in mythology and in characters. In doing so, we expand the world, we go to new locations, we visit Novyi Zem and Shu Han, and those are all integral to the narrative.”

Viewers got their first taste of Shadow And Bone Season 2 during Netflix’s TUDUM fan event on Sep. 24, 2022. While only a teaser trailer, it introduces fan-favourites like Nikolai, Wylan, Tamar and Toyla. It also gives a sneak peak at where the story is headed, ending with a foreboding question from Ben Barnes’ General Kirigin, as he asks: “Are you willing to sacrifice that which is most precious to you?”

Meanwhile, a series of first look images, meanwhile, give another sneak preview of Season 2 — and judging by the gloomy lighting, and torch-lit scenes, things are about to get even darker.

“Let’s be real, though. Perfection is impossible to attain. However, this reviewer would argue that what writer/executive producer Eric Heisserer has created in Shadow And Bone, with the help of his team and author Leigh Bardugo, is close to perfection,” Sarah Musnicky wrote for Nightmarish Conjurings.

Liz Shannon Miller at Collider praised the production, noting “it’s a beautifully made show, with the best visual touch beyond the effects being the costumes designed by Wendy Partridge, which lean heavily on Russian influences to make this world feel distinct and special from other fantasy tales.”

And while it does echo a lot of other fantasy shows, that means Shadow And Bone will likely expand its fanbase quickly. “With its magical, orphaned, chosen-one hero (hello, Harry Potter), its story of a young woman destined to cause revolution while caught between her childhood bestie and a dashing, untrustworthy incomer (hey there, Hunger Games) and its dangerous kingdom of backstabbers (Game Of Thrones, we meet again), Shadow And Bone has plenty of familiar echoes,” Ben Travis wrote for Empire Magazine. “But it’s very watchable, with a compelling world and characters that could help it become a fantasy favourite in its own right.”

This post will be updated as more information on Shadow And Bone Season 2 becomes available.

More like this
'The Crown' Season 6 Has Suspended Filming "Out Of Respect" For The Queen's Death
By Bustle Staff
This New Dating Show Is Netflix's Answer To 'Bachelor In Paradise'
By Grace Wehniainen
Everything To Know About 'Cobra Kai' Season 6
By Brad Witter
'Love Is Blind: After The Altar' Season 3 Has A Release Date & It's Very Soon
By Grace Wehniainen
Get Even More From Bustle — Sign Up For The Newsletter
From hair trends to relationship advice, our daily newsletter has everything you need to sound like a person who’s on TikTok, even if you aren’t.