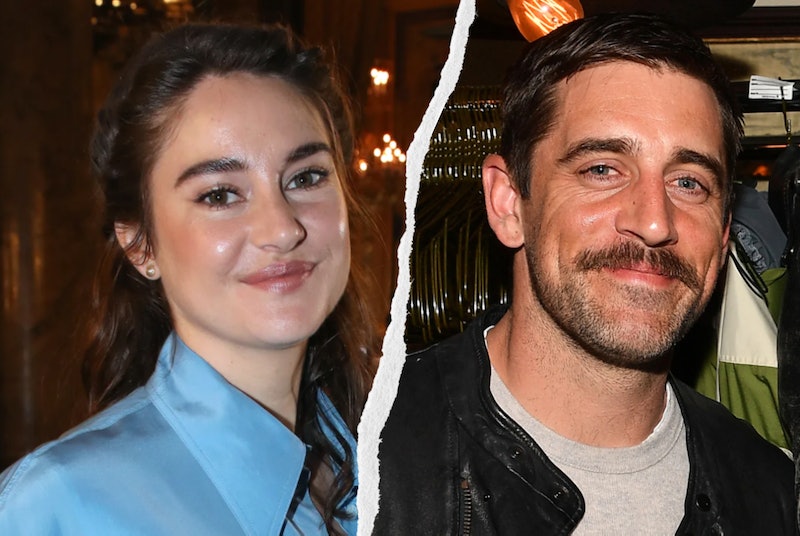 Saying that Shailene Woodley and Aaron Rodgers’ relationship was a surprise would be a bit of an understatement. Just days after dating rumors started to spread, the NFL quarterback announced his engagement by surprise in February 2021, without revealing who his fianceé was. But it was only a matter of minutes before her identity was revealed as Woodley. However, a year after confirming they were engaged, PEOPLE reported that Woodley and Rodgers separated and called off their engagement. Just weeks after their split, the pair attended a March 7 wedding together, where they reportedly were handsy with each other, sparking reconciliation rumors. But those rumors were soon dashed when it was reported that Woodley and Rodgers had broken up again in April.

Woodley and Rodgers were an unexpected match to begin with, with her being an acclaimed actor in the Divergent saga and HBO’s Big Little Lies, and him being one of the most popular football players. Even Woodley wasn’t expecting it when they met. “I never thought I’d be engaged with somebody who threw balls for a living,” she said jokingly on The Tonight Show Starring Jimmy Fallon in February 2021. “I never thought as a little girl, I was like, ‘Yeah, when I grow up, I'm gonna marry someone who throws balls! Yeah!’ But he’s really just so good at it.”

Despite their romance being new to the public at the time, Woodley and Rodgers were an item for longer than anyone knew. While they met sometime during the COVID-19 pandemic, rumors about their romance only started swirling in February 2021, and their engagement was announced just mere days later. Woodley and Rodgers’ relationship timeline proves that their relationship was a total whirlwind, filled with Derby outings, tropical vacations, and Taylor Swift songs.

Woodley and Rodgers’ relationship was first reported by Us Weekly on Feb. 3, 2021, explaining that they had started as friends before things turned romantic. “The two are staying in contact while they are living away from each other,” a source told the outlet. “The relationship is long-distance for right now, but they are making it work.”

Apparently, the long-distance arrangement worked really well for them. Just three days later, Rodgers slyly announced that he was engaged during his acceptance speech at the NFL Honors awards on Feb. 6 — without naming Woodley. “2020 was definitely a crazy year filled with lots of change ... I got engaged and I played some of the best football in my career,” he said. He also thanked “my fiancée” in the speech.

However, it didn’t take long for Woodley to confirm that she was in fact Rodgers’ fiancée. During a Feb. 22 interview on The Tonight Show, the Emmy-nominated star said they had actually been engaged for quite some time. “For us, it’s not new news, you know, so it’s kind of funny,” she said. “Everyone right now is freaking out over it and we’re like, ‘Yeah, we’ve been engaged for a while.’”

In an Instagram Live interview on March 4, Rodgers called his engagement to Woodley the high point of his 2020, saying that he’s “been enjoying” their time together. “Obviously that’s the best thing that’s happened to me in the last year,” he said. He even opened up about starting a family with her one day — but they’re not in any rush. “I’m in that age group where a lot of my close friends from high school and college are fathers now and have families of their own,” he said. “It’s maybe not in the immediate future but definitely something that I really look forward to.”

Later that month, the couple were spotted spending time together in Hot Springs, Arkansas, thanks to local eatery Best Cafe and Bar, who prepared a private dinner for the couple and posted about it on Instagram. “Our team had the opportunity to cook for @aaronrodgers12 and his crew last night,” read the caption of the post, which has since been deleted, per E! News. “Grateful for the opportunity.”

April saw one of Rodgers’ biggest dreams come true: being the host of Jeopardy. The Green Bay Packer hosted the game show for a week as part of a revolving door of guest hosts, and Woodley was just as excited as he was, promoting his appearance on her Instagram Story. “This guy right here is super sexy, super attractive, just shaved his neck this morning, has a little man bun growing,” she said, pointing the camera at Rodgers. “This guy is hosting Jeopardy! tonight!”

The couple that derbies together stays together, apparently. On May 1, Woodley and Rodgers donned their most dashing hats and joined her Divergent co-star Miles Teller, his wife Keleigh Sperry Teller, and more friends at the Kentucky Derby. “Down n Derby,” Sperry Teller wrote on Instagram, sharing a snapshot of all the couples together.

Later that month, Sperry Teller revealed that she and her husband took another fun trip with Woodley and Rodgers. On May 25, she posted snapshots from their couples getaway to Maui, Hawaii on Instagram, including a slideshow from a scenic hike and a sweet photo of the two couples all dolled up. “Happiness,” she captioned the latter post. She even poked fun at Rodgers’ love of Taylor Swift, sharing a now-deleted video of themselves singing her folklore song “the 1,” as secretly captured by Woodley. The couple that embarrasses each other, stays together?

In a new interview with SHAPE, published on Monday, June 7, Woodley opened up about falling in love with Rodgers, revealing that their romance developed rapidly, which allowed them to address their initial concerns head-on. "Starting a relationship where you immediately move in with someone— because it's a pandemic and you can't just get on a plane and go back and forth on weekends — taught us a lot about each other very quickly," she said. "We jumped in headfirst and got some of the sticky bits out of the way early.”

However, Woodley made it clear that she and Rodgers were soulmates and would’ve been brought together somehow, even without the pandemic joining them at the hip. “I have the perspective that I would have met Aaron in any context, any space in time, because I feel we were meant to be together," she said.

September 2021: Working Separately But Together

In a September interview with Haute Living, Rodgers explained that he and Woodley were being forced to spend time apart while he trained in Wisconsin for the 2021-2022 NFL season and she stayed back in Los Angeles to work on film projects. However, he emphasized that it would be a “good thing” for the couple. “It’s a busy work time for her, so [my decision] probably came at a good time for both of us to be able to focus on our work,” he said. “I mean, her work was shut down for an entire year, and she’s booked a number of projects. She enjoys working and her own routine, which I obviously enjoy, too.”

On Feb. 16, it was reported that Woodley and Rodgers had split and broken off their engagement just over a year after it was announced. InTouch first reported the story, which was confirmed by PEOPLE, who said their split was amicable. “It just wasn’t working,” a source told the magazine. “They’re very different people with busy careers and there were obstacles that they couldn’t surmount. They will remain friendly; there’s no bad blood and no drama. It just didn’t work out for them.”

On Feb. 21, after news of their split was reported, Rogers thanked Woodley in an Instagram post. “@shailenewoodley, thanks for letting me chase after you the first couple months after we met, and finally letting me catch up to you and be a part of your life,” he wrote. “Thanks for always having my back, for the incredible kindness you show me and everyone you meet, and for showing me what unconditional love looks like, I love you and am grateful for you.” Woodley, for her part, has not yet publicly addressed the reports.

In a follow-up interview on The Pat McAfee Show, the footballer apologized to Woodley after she defended him during his COVID-19 vaccine controversy in November, when Rodgers tested positive for the virus and it was reported that he wasn’t vaccinated, despite previously claiming that he was immunized. “I am very sorry to those people, Shai and my loved ones,” he said. "I didn’t realize the kind of shrapnel they’d be taking… Understanding kind of the entire gravity of the situation I was thrust into and decided to speak on multiple times had an effect on a lot of people.”

Rodgers continued to lavish praise on Woodley, calling her “an amazing partner to do life with” despite their recent split. “She's just an incredible woman, talented, smart, kind,” he said. “I said last night, she taught me what unconditional love looks like and that's a great gift. When you have a partner like that, it just makes life so much more enjoyable.”

It seems that Woodley and Rodgers are starting to get a little more than “friendly” after calling off their engagement. On March 7, Entertainment Tonight reported that the pair went to the wedding of Rodgers' Green Bay Packers teammate, David Bakhtiari, in Montecito, California, which Rodgers officiated. Fans speculated that they were back together after displaying a little PDA. “During the cocktail hour she lovingly patted his behind as she was seated and he was standing next to her and placed his hand around the back of her neck,” a source told the outlet. “On the way to the reception the pair was walking arm in arm as they made their way to the ballroom.”

According to PEOPLE, Woodley and Rodgers are not back together and only attended the wedding together as friends, but a source says the NFL player is hoping for a reconciliation. “They both had intense work schedules in the fall and it wasn't possible for them to focus on their relationship,” the source told the outlet. “Now when Aaron's season is over, he wants to give it another try. He thinks Shailene is very special. She is more hesitant though.” Entertainment Tonight added that “Aaron had told Shailene he'll put more effort into the relationship and making her a priority.”

Later that month, on March 20, Woodley and Rodgers were spotted at a California winery together with a group of friends, but their PDA seemed more than friendly. “They seemed really happy,” a source told PEOPLE. “[Shailene] was sitting on [Aaron's] lap while they hung out at the table with friends. They kissed each other's heads and were very affectionate.”

Although a reconciliation was never officially confirmed, Woodley and Rodgers reportedly split once again in April. According to Entertainment Tonight, the two did indeed attempt to mend their romance, but have decided to call it off for good, attributing it to their conflicting schedules once again. “They tried to make their relationship work but with busy careers in different industries, it was hard to see one another,” the source said. “The two have no animosity toward one another and plan to remain as friends.”

More like this
The 1st Photo Of Priyanka & Nick's' Baby Comes After 100 Days In The Hospital
By Jake Viswanath and Hugh McIntyre
Remember When Benedict Cumberbatch Announced His Engagement In A Newspaper Ad?
By Hugh McIntyre
Renée Zellweger & Ant Anstead’s Relationship Timeline Had A “Serendipitous” Start
By Justice Namaste and Hugh McIntyre
Kim Kardashian Joked That Her Wedding To Kris Humphries Was A “Gay Wedding”
By Jake Viswanath
Get Even More From Bustle — Sign Up For The Newsletter

This article was originally published on May 3, 2021