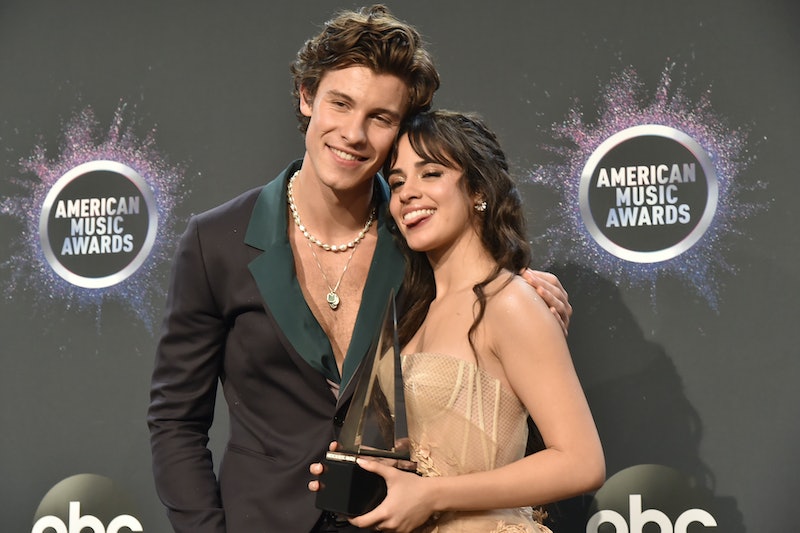 Christmas has come a little early for Shawmila stans this year. As part of the holiday deluxe edition of his new album, Wonder, Shawn Mendes and Camila Cabello have released a duet cover of "The Christmas Song," with proceeds from the track going to a good cause. Fans must have been nice this year to deserve such a gift.

"Wanted to give you guys a few surprise songs for the holidays. #WONDER holiday deluxe is out now, including #TheChristmasSong with @camila_cabello," Mendes wrote on Instagram on Saturday, Nov. 5. "Proceeds from the song will benefit @feedingamerica & we’re starting by donating $100k to support those in need in the holidays."

In addition to sharing the song on her own Instagram page, Cabello explained that she and Mendes wanted to give back during the Christmas season — both to their fans and to those in need — and offer up some holiday cheer. "This has been such a crazy year with so many challenges. This holiday season, it is more important than ever to spread love and kindness to everyone!" she wrote. "Shawn and I wanted to send all our love to you amazing humans so we put together something special for you, our rendition of 'The Christmas Song.'"

Cabello also encouraged all of her followers to donate to Feeding America, which works to eliminate hunger in the United States, before wishing everyone a happy holiday season. "We love you all so much and hope you get to enjoy this song over a very safe and merry holiday!" she added. "Let’s make our little corner of the world more beautiful today." And she made sure to mention that the message came from every member of their little family by concluding her post with a message from her and Mendes' dog. "Tarzan says hi," she wrote, with a heart emoji.

"The Christmas Song" is Mendes and Cabello's third duet, following 2015's "I Know What You Did Last Summer" and 2018's "Senorita." The couple, who first met in 2014 while Mendes and Fifth Harmony were on tour with Austin Mahone, began writing songs together early on in their friendship. "I remember thinking we met on the ... tour, and I remember I wanted to hang out with you, but you were always on the tour bus, just learning guitar," Cabello told her now-boyfriend in a June 2019 interview with V Magazine.

However, the next time they met, backstage at a Taylor Swift concert, they finally bonded — and quickly began writing "I Know What You Did Last Summer" together. During their V interview, Mendes and Cabello also revealed that they wrote multiple songs together in the three years before releasing their first two collaborations, although none of their jokey tracks were ever recorded.

"We wanted to do a song called, 'I Know What You Did Last Winter' and 'I Know What We Did Last Fall,'" Cabello said. "[Our managers] were like, 'No,' and we were like, 'What?!' We almost fired them. We were like, 'What do you mean? How’s that not a good idea?' Then we did the winter version that was like Game of Thrones version." (They've obviously gone a much more traditional route with their actual Christmas collaboration.)

Even when they're not working together, Cabello is always a part of Mendes' music; in his Netflix documentary, Shawn Mendes: In Wonder, the singer revealed that Cabello has always been his muse. "My song comes on the radio or something and I'm like, 'Everything's about you. They're all, they have always been about you,'" he says at one point in the documentary. It looks like Mendes officially has everything he could wish for this Christmas in Cabello.

More like this
Kanye West Apologizes To Kim K "For Any Stress I Have Caused" In Rare Interview
By Jake Viswanath
Adam Levine Denies Having An Affair — But Admits He “Crossed The Line”
By Jake Viswanath and Radhika Menon
Justin & Hailey Bieber’s Relationship Is “Unbreakable” After Their Two Health Scares
By Bustle Editors
Everything To Know About Taylor Swift’s 10th Studio Album, 'Midnights'
By Grace Wehniainen and Jake Viswanath
Get Even More From Bustle — Sign Up For The Newsletter