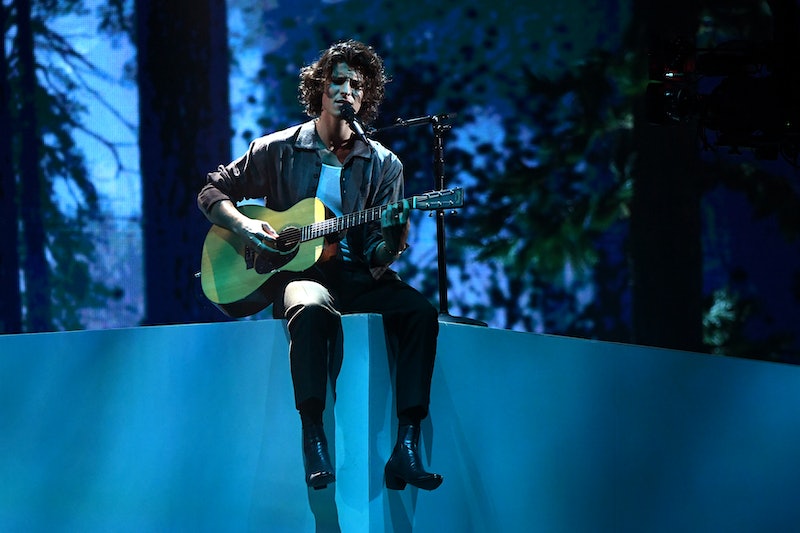 Shawn Mendes fans won't have to wait for new music much longer because his fourth studio album Wonder will be here right before the holidays. In a mysterious trailer released on Sept. 30, the pop star revealed that the album will be out in early December. A few days later, he gave fans their first introduction to his new era by releasing the record's lead single, also titled "Wonder."

Before the song's release, the Canadian superstar took a page from the Taylor Swift playbook and dropped some Easter eggs about the project on a new website, whatiswonder.com. The site allows fans to explore the artsy apartment seen in the trailer and search for clues about the upcoming album. One of the clues, a "set list" found on the floor, revealed some unknown track titles, a few of which are new songs that will be featured on the album.

So far, Mendes has released three songs from Wonder: the title track, the "Intro," and his "Monster" collaboration with Justin Bieber. But there's so much more new music to come once the album drops — and yes, a lot of it was inspired by his relationship with "Señorita" duet partner Camila Cabello. While she may not be on the album itself, the singer revealed that the former Fifth Harmony member played a huge part in its creation. Here's everything you need to know about Wonder.

When Will Wonder Be Released?

As Mendes revealed in a mysterious teaser for the album, Wonder is set to be released on Dec. 4. But if you can't wait that long, the singer's Netflix documentary, In Wonder, started streaming on Nov. 23. The new doc gives fans an inside look at the musician's life during his 2019 world tour, including his highly publicized relationship with Cabello.

Will There Be Any Collaborations?

Mendes' handwritten note teased a collaboration, but fans now know that the mystery artist is none other than Justin Bieber. Mendes worked with his fellow Canadian pop star on "Monster," which was released as the second single from the album on Nov. 20. Then, the duo performed together for the first time at the 2020 American Music Awards on Sunday, Nov. 22, transforming the stage into an eerie, socially distanced forest. While this will be the only collaboration on Mendes' album, it will be more than enough for the fans who've been waiting for them to team up for years.

Have There Been Any Music Videos?

Mendes has actually released three visuals for his new album already if you count the mysterious Wonder trailer along with his singles "Wonder" and "Monster." Most recently, he shared the music video for his collaboration with Bieber, which shows the two musicians contemplating the meaning of their lives and careers on a random white cube in the middle of the woods. Just go with it, OK?

What Inspired The New Album?

Although the concept of Wonder seems vast, the inspiration for Mendes' new album can be described in just two words: Camila Cabello. In an interview with SiriusXM's Morning Mash Up on Oct. 4, Mendes basically admitted that the entire album was about her. "When your girlfriend is an insanely talented, real musician who writes her own music, it's scary to write an album around her," he said, adding that she pushed him to continue working even when he was feeling apprehensive.

"She really was a champion for this album and I remember back when I first started a lot of the concepts and they felt a little bit intimidating," he continued. "She would [tell me] once a month, 'Hey, just a reminder, this concept you're on is incredible. It's going to make people feel something really special. Don't stop.'" Well, Mendes didn't stop, and now his fans will reap the benefits.