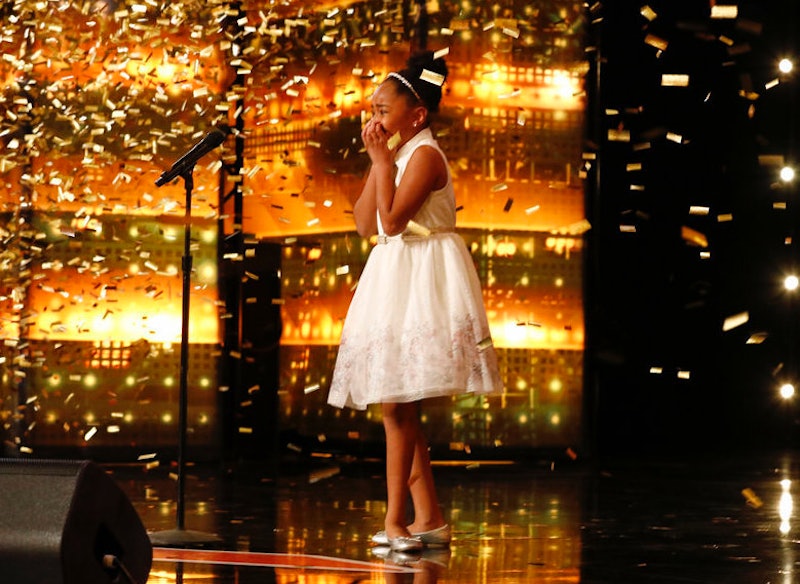 A lot of impressive singers, dancers, and just generally all-around talented people have found success on America’s Got Talent, but none of them have done what a 9-year-older performer managed on the most recent episode of the long-running reality competition. On AGT’s July 6 episode, Victory Brinker appeared at the very end — and for good reason. From the moment the superstar-in-training walked onto the stage, she was met with applause, but little did anyone watching know what was to come out of the small singer’s mouth.

After working through nerves (she was “exnervous,” a mix of excited and nervous, according to the contestant herself), the pint-sized performer launched head-first into her aria, and it only took a matter of seconds for the auditorium full of people to begin cheering loudly.

The pre-teen chose to sing “Je Veux Vivre,” also known as Juliet’s Waltz, taken from the French opera Romeo et Juliette. It’s not an uncommon choice for those who know opera, but it was certainly unexpected for someone under the age of 10. Brinker, a soprano, knocked it out the park, and she didn’t even try to skip any of the high notes.

After several minutes of wowing the crowd, she finished her performance and received a standing ovation from hundreds, including three of the four judges. Simon Cowell didn’t rise, which may have worried some at-home viewers, but he was perhaps the most impressed of all of them.

After judges Howie Mandel, Heidi Klum, and Sofia Vergara gushed over how “angelic” she was and how amazed they are at her vocal ability, it came time for Cowell to speak. At first, he didn’t seem impressed, and he shared several platitudes about how showing up is important and how brave Brinker is. He then asked host Terry Crews to come down to the judging panel to speak privately.

This secrecy, in addition to the whispering among the bunch, created a lot of tension, but it was all worth it. Cowell returned to say, “We’re not going to give you a yes today,” and before the audience could boo too loudly, the four judges and the host came together to hit the golden buzzer all at once. Cowell pointed out that this had never happened on the show before, making Brinker the first contestant to receive the honor from everyone simultaneously.

Brinker is now headed straight for the live rounds, and she is already a standout in the 16th season of America’s Got Talent. Now that she has made history on the show and accomplished something no other performer could on the program, there’s no telling how far she’ll go.

Despite being only 9, Brinker’s mother explained in a setup video that played before the child began singing that her daughter has been wanting this to happen for a long time. “All these years, Victory has been saying, ‘I wanna sing on AGT. I wanna sing for the judges.’” Now, not only has her dream of performing for the four deciders become a reality, but she has been introduced to millions, and this could be just the beginning for the viral sensation.