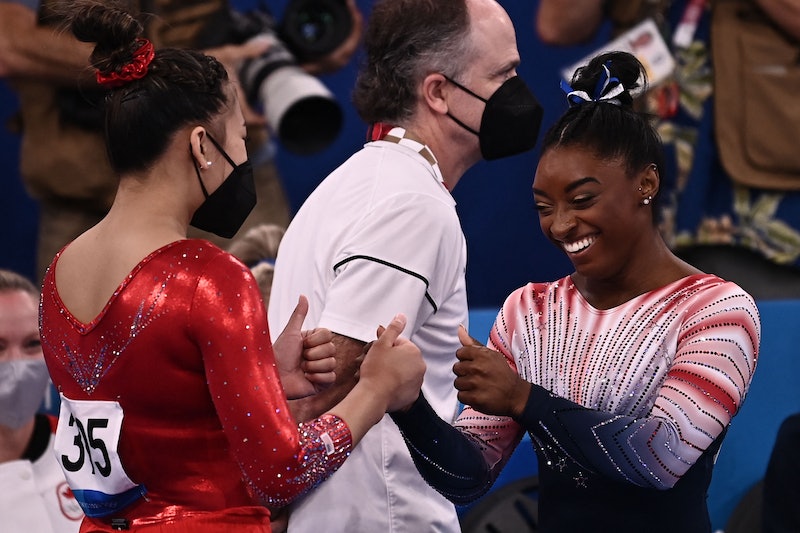 Simone Biles made a triumphant return to the Tokyo Olympics this morning (August 3), winning bronze at the balance beam final after securing a score of 14.0. This is her seventh Olympic medal, tying her with Shannon Miller for the most by a U.S. gymnast.

“I didn’t expect a medal today, I just wanted to go out there for me and that’s what I did,” Biles in an interview following her performance. “I was proud of myself just to go out there after what I’ve been through.” The gymnast landed her dismount to a crescendo of cheers from Team U.S.A. in the stands.

China’s Guan Chenchen won gold after scoring 14.63, while Tang Xijing took silver with a score of 14.23.

Last week, Biles performance on the vault resulted in her lowest Olympic score on record. The 24-year-old athlete left the arena after the vault, but later returned to support her teammates as they went on to win silver.

“After the performance I did, I just didn’t want to go on,” Biles explained at the time. “I have to focus on my mental health. I just think mental health is more prevalent in sports right now. We have to protect our minds and our bodies and not just go out and do what the world wants us to do ... We're not just athletes. We're people at the end of the day and sometimes you just have to step back.”

Biles’ decision to look after her mental health was met with support across social media.

It was later revealed that Biles was experiencing what is known in the gymnastics world as the “twisties”, a problem affecting her sense of midair orientation that can result in serious injury.

Competing on the beam today allowed Biles to avoid the “twisties”. As the Guardian explains, on the balance beam, Biles usually “attempts fewer twists than all other events,” which may explain why she felt comfortable returning to this one in particular. In her routine, she performed backhand springs, flips, split leaps and finished with a double backflip in the pike position instead of her “sole twisting skill” – a twisting double back dismount.

Editorial note: This piece was update at 12.07 p.m. BST to include more details about Biles’ performance at the balance beam final.

More like this
Jemima Khan Used Her Own Life As Inspo For 'What’s Love Got To Do With It?'
By Darshita Goyal
'Bridgerton's Regé-Jean Page Is The World’s Most Handsome Man
By Darshita Goyal
Gerard Butler Insisted On Adding This Pivotal Scene To 'Plane'
By Catharina Cheung
'Abbott Elementary' Fans Probably Missed This 'Parent Trap' Easter Egg
By Sam Ramsden
Get The Very Best Of Bustle/UK
Sign up for Bustle UK's twice-weekly newsletter, featuring the latest must-watch TV, moving personal stories, and expert advice on the hottest viral buys.