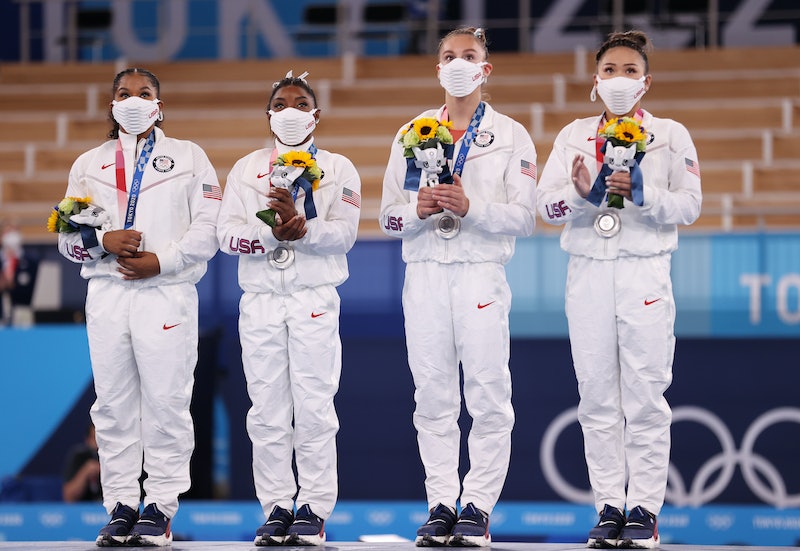 When Simone Biles made the decision to pull out of the team and all-around finals in the 2021 Olympics on July 27, citing her mental health, the world applauded her decision to put her emotional well-being first. And two days afterwards, when she elaborated that she had been dealing with the “twisties,” a problem affecting her sense of midair orientation, gymnasts everywhere flooded social media with support. The cutesy name sounds innocuous, but elite gymnasts say the condition is deadly serious.

Biles attempted a vault maneuver called an Amanar as her opening move in the team competition, but once she hit the vault and launched upwards, things went wrong, she said, per the Washington Post. “I had no idea where I was in the air. I could have hurt myself.” She ended up doing 1.5 aerial twists rather than her planned 2.5, a radical change, and retired from the Tokyo arena almost immediately. Later on her Instagram Stories, Biles elaborated, saying, “I didn’t have a bad performance and quit ... I simply got so lost my safety was at risk as well as a team medal.”

The twisties are a kind of mental block that hits gymnasts during a routine. “As much as you want to do it, and you know how to do it, and you know the mechanics of what needs to happen, your brain won't let you do it,” Hannah Orenstein, Elite Daily’s senior dating editor and author of the novel Head Over Heels, about the world of Olympic gymnastics, tells Bustle. And it can be very difficult — and dangerous — for athletes to try and battle through it.

What Are The Twisties?

The twisties are, in essence, a disconnect between the brain and the body. Elite gymnasts spend years honing their skills, to the point where their routines — even the very complex ones involving spinning in midair — rely largely on muscle memory. “When you're flipping or twisting (or both!) it is very disorienting to the human brain. When training new flips and twists, you need external cues to learn how it feels to complete the trick correctly,” wrote former gymnast Catherine Burns in a viral Twitter thread. After enough practice, she explained, muscle memory kicks in.

When Biles, Sunisa Lee, or another high-level gymnast throw themselves into a routine, muscles and sensory awareness take over, guiding them safely through the tricks and into a safe landing. People with the twisties, though, lose that deep connection between body and mind — and moves rapidly become very dangerous. Instead of sticking the landing, a gymnast could land awkwardly on a more vulnerable part of their body — like their head or neck — risking serious injury.

Biles described the feeling on her Instagram Stories. “Literally cannot tell up from down. It’s the craziest feeling ever. Not having an inch of control over your body.” She added, “What’s even scarier is since I have no idea where I am in the air I also have NO idea how I’m going to land. Or what I’m going to land on. Head/hands/feet/back...”

"Imagine skydiving and your parachute won't open," Christina Myers, a former gymnast and gymnastics coach from Birmingham, Alabama, told BBC News. "Your brain wants nothing more than to perform the intended skill correctly, but your body feels like it suddenly has a mind of its own." Burns explained to NPR that the twisties often happens in rotational moves — where gymnasts have to turn really rapidly — but can occur any time a gymnast is in the air.

How Do You Fix The Twisties?

Attempting to push through extreme disorientation in a sport where one misstep could result in severe injury is dangerous. Biles, who performs some of the most difficult routines in gymnastics history, won’t want to compete until she knows her brain and body have reconnected.

“I've heard other former elite gymnasts say that if they had vaulted like [Biles] did, they would've blown out their knee, or worse, gotten paralyzed,” Orenstein, a former competitive gymnast, says. “The only reason [Biles] was able to land on her feet the way she did is because she is a truly incredible athlete with nearly superhuman abilities.”

Gymnasts agree that the only cure for twisties is time and going back to basics — physically and emotionally. That might mean doing simple moves that enable muscle memory to kick back in, or going through coaching to help trust their bodies again. Biles added on her Instagram Stories that working on soft surfaces and pits could also help her retrain her sense of in-air rotation.

On Aug. 2, USA Gymnastics tweeted that Biles will compete one last time in Tokyo, in the balance beam final. Following the announcement, former Olympian Laurie Hernandez told Today that it makes sense for Biles to re-enter the games with this event. “When you are on the bars, you are swinging upside down consistently,” Hernandez explained. Not the safest sensation when you’re dealing with the twisties. The balance beam, on the other hand, is upright and therefore a bit safer. “I think beam is probably the safest route in terms of doing skills that don’t have too many twists,” she said. “I’m curious to see what she’ll do for her dismount, but I have a feeling she’s going to do very well.” At the 2016 Olympics in Rio, Biles took home the bronze medal in the balance beam event.

Regardless of how this last event turns out, Orenstein hopes that Biles’ openness becomes a watershed moment for the sport. “Gymnastics culture has long celebrated pushing yourself to the limits, even at the expense of your health — think about Kerri Strug, vaulting on an injured ankle,” she says. “I hope that [Biles’] courage and leadership will empower other athletes to put their health first.”

More like this
I Visited Remedy Place, The Social Club Transforming The Wellness Industry
By Rachel Lapidos
The 8 Best Pilates Exercises For Lower Back Pain
By Carolyn Steber
All The Muscles You Work When Doing Deadlifts
By Carolyn Steber
This Company Will Send STI Tests Right To Your Door
By Lexi Inks
Get Even More From Bustle — Sign Up For The Newsletter

This article was originally published on July 29, 2021