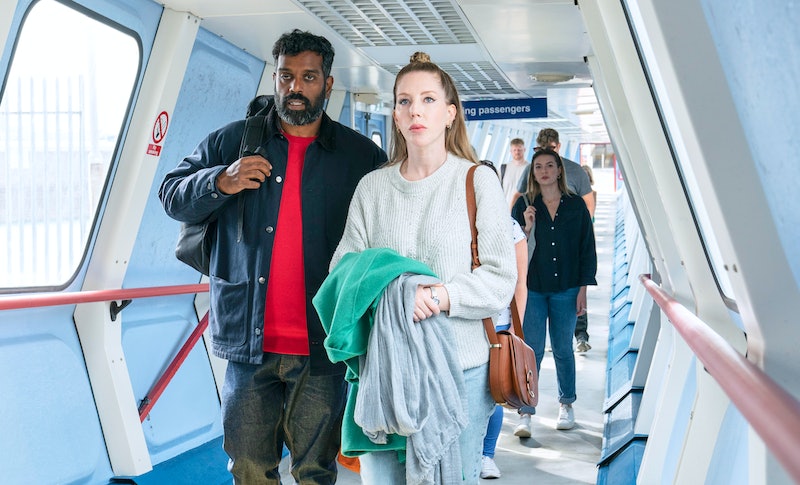 From Asian Provocateur to BBC’s Avoidance, Romesh Ranganathan has been dipping his toe into acting in recent years and has cemented himself as a comedy legend in British television. And he’s set to continue his venture into the acting world with his latest show, Romantic Getaway. Joining forces with friend and fellow comedian Katherine Ryan, the six-part comedy-drama is set to drop on Sky in 2023 and will follow main characters Alison (Ryan) and Deacon (Ranganathan) as unlikely criminals. But what exactly is Romantic Getaway about? Here’s everything you need to know about the latest Sky series.

The Bonnie and Clyde-inspired Romantic Getaway will follow Alison and Deacon, who are eager to start a family, on their journey to seek IVF treatment. Their desperate quest leads them to steal £50,000 from their rich and sneaky boss, Alfie. Although they manage to transfer funds from their boss to help with their IVF, the pair accidentally add an extra zero to the transaction, amounting to a whopping £500k cash transfer. After the buzz wears off, the couple must not only contend with the long process of IVF, but also have to figure out how to use the money without getting caught. Their web of lies leads them to the local criminal underworld of Reading, as well as challenging their relationship and future plans together.

As well as Ranganathan and Ryan portraying the titular couple Deacon and Alison, Johnny Vegas will play the couple’s wealthy boss, Alfie.

As well as starring in the show, Ranganathan is also a credited writer on Romantic Getaway, alongside award-winning director Benjamin Green. The two have become close colleagues since working together on the BBC hit series, ​​Asian Provocateur, in 2015 — so much so that they even have their own production company Ranga Bee together, which is unsurprisingly behind Romantic Getaway.

Speaking on what it was like working with Ryan, Ranganathan told The Upcoming: “We’ve been mates for like a decade. That’s the whole reason we decided to come up with this show… Katherine and I know each other so well, we’re really good friends so that was never going to be an issue.”

You can start 2023 on quite the joyous note as Romantic Getaway is set to be released on Jan. 1, 2023. But if you can’t wait until the New Year, why not watch the trailer below to give you a flavour of what’s to come.

More like this
Everything To Know About The 'Daisy Jones & The Six' TV Series
By Maxine Harrison and Brad Witter
'Magpie Murders' S2 Will Include A *Major* Shake-Up
By Sophie McEvoy
The Song At The End Of 'The Last Of Us' Ep 1 Has A Deeper Meaning
By Sophie McEvoy
These 5 Words In 'The Last Of Us' Ep 2 Have A *Major* Impact In The Future
By Sophie McEvoy
Get The Very Best Of Bustle/UK
Sign up for Bustle UK's twice-weekly newsletter, featuring the latest must-watch TV, moving personal stories, and expert advice on the hottest viral buys.