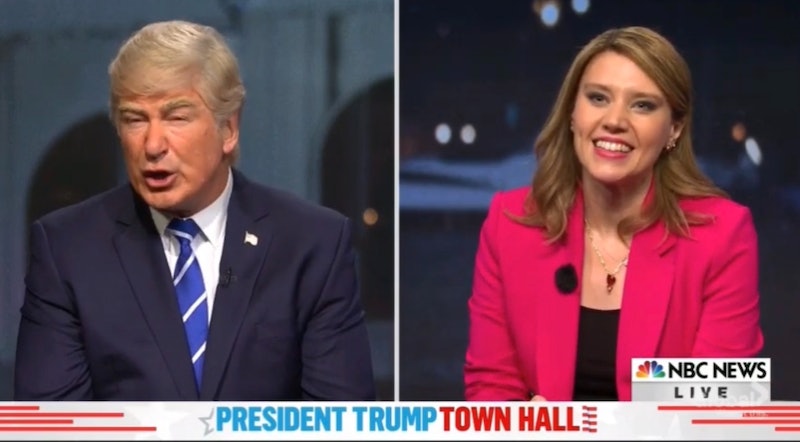 Alec Baldwin was among the 100 stars to publicly criticize NBC for airing President Trump's Oct. 15 town hall, and when he appeared as the POTUS on Saturday Night Live's Oct. 17 episode, the actor got in one more dig. In fact, SNL addressed the Trump town hall more than once, despite airing on the same network.

The cold open began by noting that while ABC aired Democratic presidential nominee and former Vice President Joe Biden's town hall, NBC opted to lay "a thirst trap for President Trump," leaving viewers to flip "back and forth, trying to decide between a Hallmark movie and an alien autopsy." The sketch also included Kate McKinnon as "surprise badass" Savannah Guthrie and Mikey Day as George Stephanopoulos, with Jim Carrey and Maya Rudolph reprising their respective roles of Biden and VP nominee Kamala Harris.

"If you were angry at NBC for doing this town hall, just let me get a few questions in, and I think you'll thank me," McKinnon's Guthrie said with a wink, before holding the president's feet to the fire over everything from his COVID-19 diagnosis to QAnon and his reluctance to condemn white supremacy.

Later in the Issa Rae-hosted episode, co-head writer Michael Che took more direct aim at NBC during the "Weekend Update" segment. The comedian joked that viewers shouldn't have been surprised by NBC's decision. “What can I say? We have a type,” he said, while photos of disgraced NBC alums Bill Cosby, Matt Lauer, as well as Trump, appeared in the top right corner of the screen.

After news broke that NBC scheduled a town hall with Trump in the same time slot as Biden's, former and current NBC employees accused the network of prioritizing ratings and inciting division by giving Trump free air time, rather than engaging in the planned debate format. As Baldwin tweeted on Oct. 15: "...@NBCNews had a long and venerable history. Huntley-Brinkley, John Chancellor, Nancy Dickerson. Now, they are another casualty of the Trump era. Rest In Peace, NBC News."