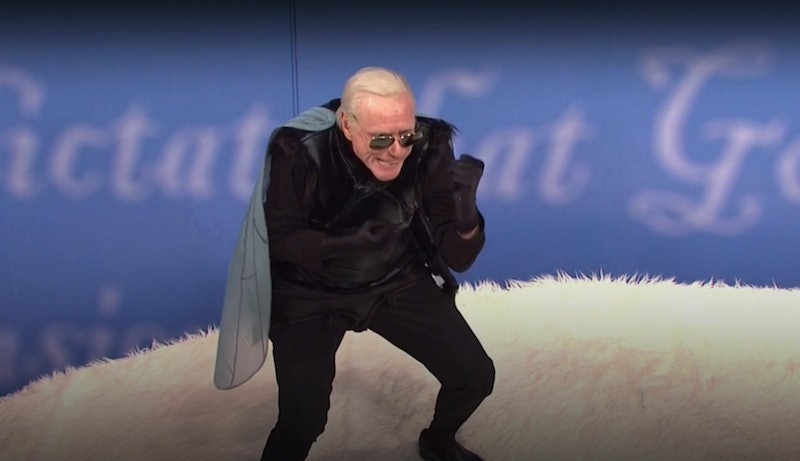 The fly that landed on Mike Pence's head was one of the most talked about parts of this week's vice presidential debate, so it only made sense that the fly was also the star of Saturday Night Live's VP debate sketch. SNL decided to create a bonkers backstory for why the fly was there in the first place, and it involved Joe Biden, Jeff Goldblum, and Herman Cain.

The beginning of the sketch briefly touched on some of the other major moments from the debate, like Kamala Harris telling Pence that she was speaking and the many amazing facial expressions she made while Pence was talking. (That side eye, though.) But then things started to get weird.

As Jim Carrey's Joe Biden watched Maya Rudolph's Kamala Harris command the stage, he decided that he wanted to be there too. So he jumped in a teleportation machine that accidentally turned him into the fly on Pence's head. Despite the malfunction, Carrey's Biden had a lot of fun shouting out snappy one-liners and slowly morphing into Jeff Goldblum from Jurassic Park, warning us about how God's creation of dinosaurs led to the creation of Trump, which will lead to God's destruction. Sure.

The first fly was then joined by a second fly on Pence's head. This fly was Herman Cain, played by Kenan Thompson, who was there to complain about Trump's handling of the coronavirus pandemic. That's when Kate McKinnon as moderator Susan Page asked the question all of us were asking during the real debate: "Mr. Vice President, do you not feel that at all?"

The whole sketch ended with Kamala Harris smacking the flies off of Pence's head with a giant fly swatter, which was frankly the least weird part of the whole thing.

More like this
The Black Lotus Staff Has "Had Enough" In The 'White Lotus' Spoof From 'SNL'
By Brad Witter
Michael B. Jordan Tackled His "Public Breakup" With Lori Harvey On 'SNL'
By Brad Witter
Who Is Pete Davidson Dating? He & Chase Sui Wonders Got Caught Kissing
By Jake Viswanath
Man Meets Politics: ‘Boy Meets World’ Star Ben Savage Is Running For Congress
By Jake Viswanath
Get Even More From Bustle — Sign Up For The Newsletter
From hair trends to relationship advice, our daily newsletter has everything you need to sound like a person who’s on TikTok, even if you aren’t.