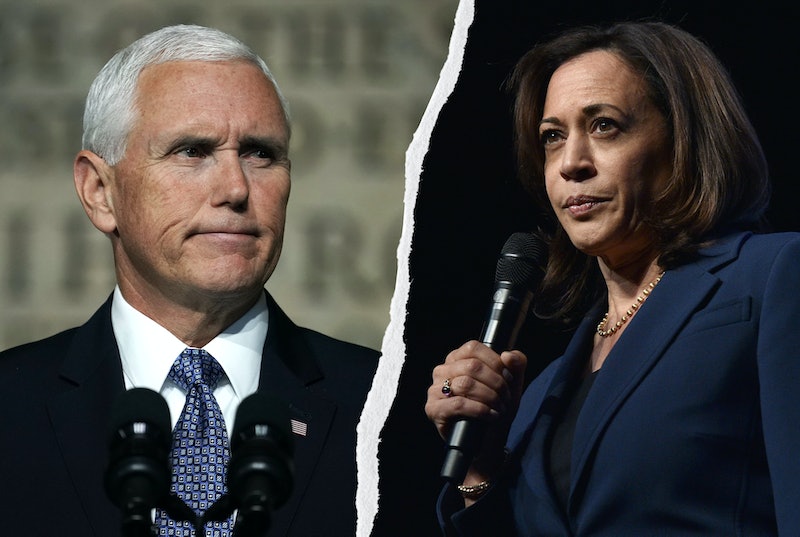 Both cool under fire, Vice President Mike Pence and Sen. Kamala Harris took the stage in Salt Lake City for the vice presidential debate. Neither were new to this rodeo. Last year, Harris faced off against a crowded field in the Democratic primary, in which she became known for her prepared zingers. And in his 2016 VP debate against Sen. Tim Kaine, Pence was "tight, disciplined, and focused," according to Vox's review of the night.

For the most part, the evening adhered to those expectations. It was worlds away from their running mates' performances the previous week, in which President Donald Trump interrupted Joe Biden constantly. During this debate, Pence interrupted Harris occasionally, but not nearly with the same level of vitriol and hostility as Trump. In response, Harris responded, "Mr. Vice President, I'm speaking." In reclaiming her allotted time, Harris gave herself room to offer some zingers of her own toward Pence. Here are a few of the standout moments from the 90-minute verbal jarring between the two VP candidates.

After Trump and Biden's catastrophic debate the previous week, Sen. Harris came prepared to fend off interruptions. "Mr. Vice President, I'm speaking," she repeated when interrupted. She'd then advocate for getting additional time back — "But I would like equal time," she said — which the moderator, Susan Page, allowed.

When asked about the candidates' health records, Harris noted the importance of transparency and then pivoted to discussing Trump's tax returns and massive debt. "It would be really good to know who the President of the United States, the commander in chief, owes money to," she said.

On the Supreme Court:

When Susan Page asked Pence about the Supreme Court and Trump's nomination of Judge Amy Coney Barrett so close to an election, the Vice President pivoted to ask Harris about court packing. He opened by talking about the history of the Supreme Court, in a manner that could be read as patronizing. While Harris did equivocate in her answer — never directly answering whether she and Joe Biden would consider adding additional seats to the high court — she responded to his tone in stride. "I'm so glad we went through a little history lesson," she said, before embarking on her own, in which she discussed systemic racial disparities in the courts.

During the beginning of the evening, Pence reiterated points about Biden's tax plan, saying that on Biden's first day in office, he would increase taxes for Americans. (Biden's plan would increase individual taxes for households making over $400,000.) Harris responded quickly, "This is supposed to be a debate based on fact and truth," she said. On the topic, Pence brought his own prepared line: "You're entitled to your own opinions. You're not entitled to your own facts," he said multiple times. It's a line, which he didn't attribute, from former Democratic Sen. Daniel Patrick Moynihan, who passed away in 2003.