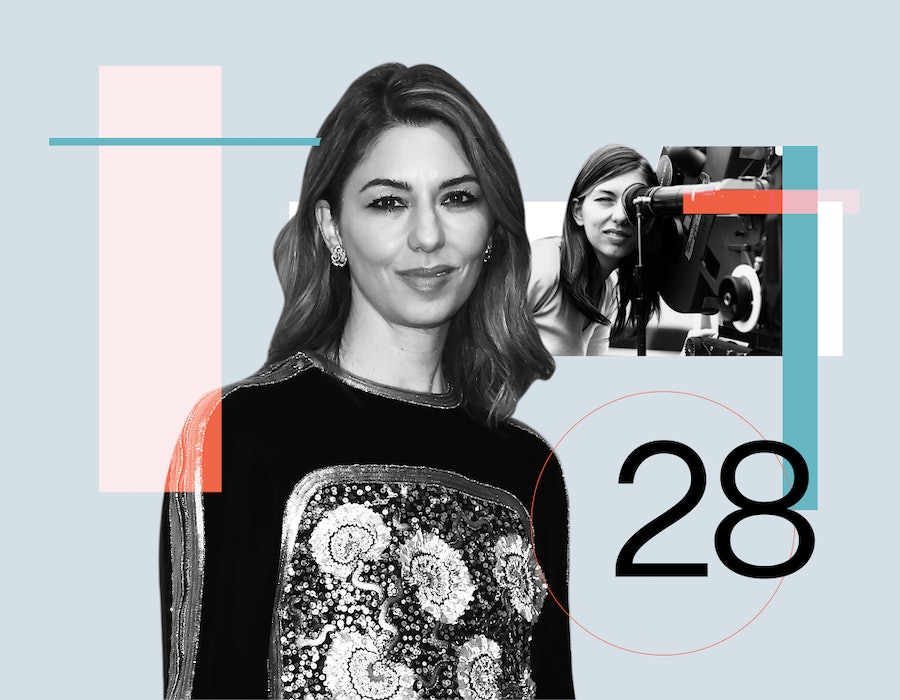 In Bustle’s Q&A series 28, successful women describe exactly what their lives looked like when they were 28 — what they wore, where they worked, what stressed them out most, and what, if anything, they would do differently. This time, On the Rocks director Sofia Coppola reflects on making her very first feature film.

What Sofia Coppola remembers most about being 28 is all the pancakes. "There was a lot of going out to brunch during the week in my twenties," she tells Bustle. "I would stay up all night writing, then I'd start the day late and go out to breakfast [with my friends] and eat pancakes everyday." While Coppola spent much of her twenties adrift — dabbling in various art forms like fashion design, photography, and modeling — by 28 Coppola had found a project that consumed her so fully she was willing to stay up all night working on it.

"Thurston Moore told me about this book, The Virgin Suicides. I remember he had a copy and the cover was just blonde hair and it was really intriguing," she explains. Though a director was already adapting the Jeffrey Eugenides novel, Coppola felt compelled to commit her cinematic vision for the story to the page. "I started working on a chapter and before I knew it, I'd written the script. I tracked down the producers and said, 'If that director falls through or if anything changes, would you look at my script?' Luckily, when that one didn't work out they decided to give me a chance."

What started off as a creative exercise has become one of the most enduring and celebrated portraits of suburban adolescence. The film, which follows the enigmatic Lisbon sisters, five cloistered young women not long for this world, premiered at the Cannes Film Festival and was later added to the Criterion Collection. In the 20 years since its turn of the millennium release, Coppola has become one of the defining auteurs of her generation, known for her lush, romantic, and ultra-feminine aesthetic displayed in films like Lost in Translation, Marie Antoinette, and the recently released On the Rocks. Below, Coppola, 49, reflects on partying in a chateau at Cannes, wearing baby T- shirts, and the moment people started taking her seriously.

It was a big turning point for me because I was never planning on being a director. I spent most of my twenties hanging out with friends, having fun, and trying to figure out what I wanted to do because I couldn't decide. I had a little clothing company [Milk Fed], I did some photography, I studied art at school, and I made a short film. [At 28] I went to Toronto and made [The Virgin Suicides] on a very, very low budget. It was a big, scary learning moment for me. But I think whenever you do anything scary it pushes you and gives you the confidence to do something else. So it was a big moment for me to find my way as a filmmaker.

Outside of The Virgin Suicides, what else was going on in your life that year?

Spike [Jonze] proposed to me the night before my first day of shooting on my movie. I was so distracted, that was not the moment to be making life decisions. But we'd been together a long time, we were living together, and I wanted to move on to the next [phase of our relationship]. So it was a busy year: I was bringing my movie to Cannes, I was getting married right after and preparing the wedding. I think we also went to Venice that year for his movie, Being John Malkovich, which was coming out at the same moment. It was intense and it was all a lot, but it was exciting. Then ultimately that wasn’t the right direction for my personal life, but it was the next step in that relationship. [Ed note: Coppola and Jonze divorced in 2003. She later married Thomas Mars in 2011.]

How did you juggle it all?

I was under a lot of stress making the movie. I remember my mom came to visit [the set] and she was worried that I wasn't eating because I was so nervous. She'd be like, "Make sure someone brings her a sandwich!" I was learning how to [be a filmmaker] on the job. It’s also stressful when it's a low budget [production]. Every moment is intense because you don't have the resources to create extra time on stage, so there were always issues. Especially working with an underage cast.

Then planning the wedding I'm sure was overwhelming, but after shooting a movie that was fun. It was just stressful making such a big decision, because I think part of me hadn't totally thought about it, even though we'd been together a long time. I think I had doubts, but because I was younger I wasn't really paying attention to those [doubts]. I always tell my kids they can't get married before they're 30 because you have to really know who you are first. I refer to it as my practice marriage — it was fun and served its purpose for that time.

It was the grunge era and that's when I met Marc Jacobs. My friends and I would sometimes go to New York Fashion Week, which was at the same time as Halloween and the MTV [Video Music] Awards, so it was a fun time to be in New York. Back then there weren't celebrities at the fashion shows and it wasn’t as professional. It was smaller scale, not so slick. So that was fun.

We were wearing baby T- shirts, which is funny to see my 13-year-old daughter wearing now. We would go to Sears and buy those packs of baby T-shirts and wear those in that Sonic Youth, Beastie Boys era.

It was really fun to be in Cannes. [The Virgin Suicides’ premiere] went well and I was there with friends. There was a party that was in some chateau on the edge of town. At [the party] we were like, "Oh my God! There’s Kristin Scott Thomas from Under the Cherry Moon!” It was fun and glamorous to be in Cannes after shooting the movie on a really low budget in Toronto. It was really exciting.

Do you have any regrets from that period?

No, because I think all those things make you who you are. Even marrying the wrong person. I wouldn't take any of it back because you learn from every mistake you make along the way. So I felt I learned a lot. I don’t have any advice [I’d give to myself then]. I would say to enjoy it, but I feel like I did. I did it to the fullest.

Has there been a point in your career where you felt like you made it?

Maybe after Lost in Translation was successful and people took me more seriously. I feel like people talked to me differently. Whereas before, someone could dismiss me. I was used to just being seen as the daughter of [Francis Ford Coppola] and then Spike’s wife. But it was different after having some commercial success. People would talk to me as someone who actually had something to say.