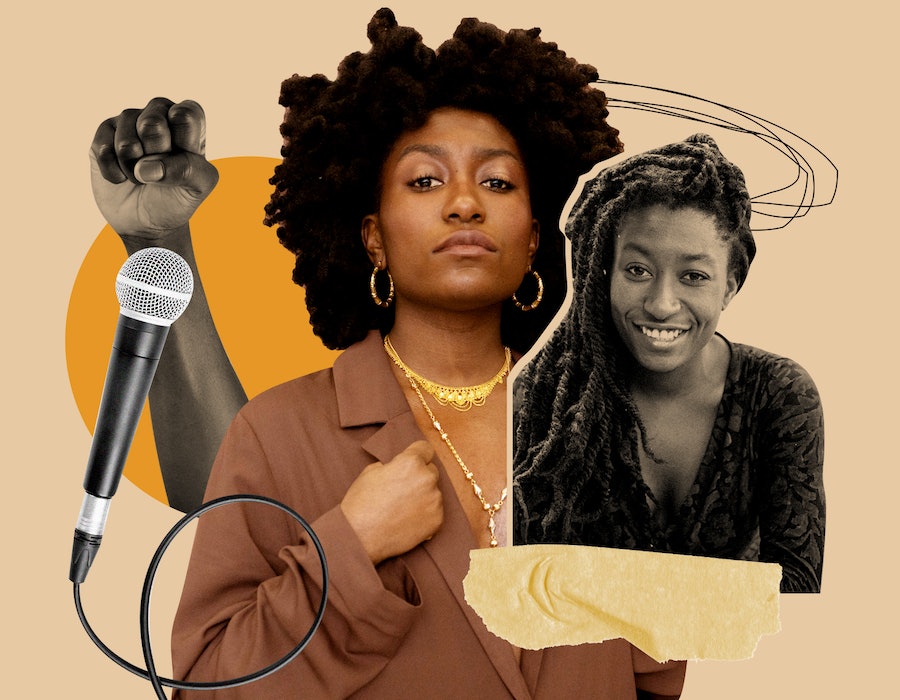 In BBC One's satirical panel show Frankie Boyle's New World Order, a group of comedians are presented with a string of controversial motions which they are asked to debate, pick apart, and poke fun at. On Sept. 10, Boyle was joined by Sara Pascoe, Jamali Maddix, Dane Baptiste, Jen Brister, and Sophie Duker to discuss the Black Lives Matter movement, among other topics. During the discussion, Duker made a joke, riffing off of Boyle's motion, that has since received major backlash, including abuse on social media, far-right blog posts, and a media pile-on. Below, Sophie offers her response.

It’s the future. Hoverboards exist, smallpox is eradicated, and there are so many cute nicknames for white people! From Karens to gammons, there’s a gamut of euphemisms at your disposal, each cheekier than the last.

Other ethnicities tend to receive words that silence a room, slurs heavy with historical hate. Whereas white jokes tend to be trends, restocked each season and published uncensored all over the shop. So mainstream they’re even used by particularly witty whites about themselves.

From American stand-up Jeff Foxworthy identifying as “redneck” back in the '80s to Louis C.K. saying “being white is clearly better” in 2008, there’s a rich tradition in white comics being self-deprecating about the quirks (and often the perks) of caucacity. When a famous presenter uses “white” as a byword for “uncool” or an iconic comedian raps about white moms day drinking and sleeping with policemen, crowds laugh loud and The Man barely bats an eyelid. Because taking the piss doesn’t cancel out privilege. Punching up bruises egos only. Everyone gets that... right?

Anti-Blackness is nothing new, but the growing global rejection of some of its most recent atrocities is shaking bullies to their core. They panic that marginalized Black people, if treated with humanity and respect, might turn out to be just like them: tyrants. The only alternative they can imagine to current racial inequality is tit-for-tat. Progress? They hate to see it.

To put it bluntly, racists can’t take a joke. They’ll cry hate speech rather than concede a chuckle, attempting to silence anyone they deem subversive.

This paranoid fear of a Black planet / Wakandan uprising / Black billionaire militia helmed by a wild-eyed Oprah has turned the bullies into hyper-sensitive snowflakes. To put it bluntly, racists can’t take a joke. They’ll cry hate speech rather than concede a chuckle, attempting to silence anyone they deem subversive. With comedians, a funny tinge marks you out as a target — but running your mouth about race makes you Public Enemy No 1. Despite countless POC stand-ups delivering mic-drop routines about why reverse racism doesn’t exist (see Aamer Rahman), it doesn’t stop us being piled on disproportionately for tongue-in-cheek routines, tame tweets, and things we never actually said.

While the dust was still settling after Diversity’s dance, I was singled out for a joke made during a discussion on Frankie Boyle's New World Order entitled “Black Lives Matter Glosses Over the Complexity of a World Where We All Need to Come Together and Kill Whitey.”

The discussion was prolonged (more than 90 minutes, though it was later edited down), passionate, and — appropriately — peppered with enough LOLs to avoid pious sermon territory. Midway through, I made the obvious point that "we don’t really mean we want to kill whitey," before quipping, "We do! Nah, not today." The statement was pre-approved by white producers, signed off by the Beeb, and written using language directly lifted from the motion. (A motion put forward by our host — a white comedian.)

After the group laughed, I clarified my understanding of "kill whitey": "Whiteness is a capitalist structure, it benefits itself. It hurts white people, it hurts non-Black people, it hurts Black people." Didn’t seem like a radical take, TBH. What right-thinking person wouldn’t want to eradicate a system predicated upon racial inequality?

The program aired. Thousands watched and barely mentioned that moment. All shows get some blowback — I'm guessing not even nana-friendly Antiques Roadshow can escape the piping hot ire of the couch potato — but this episode’s complaints were minimal. Nowhere near enough to register on the radar for an official Ofcom response. Yet a scared, sad, cynical someone smelt subversion — and fumed.

Then came the right-wing media storm. They knew "kill whitey" would get clicks. But readers were already aware that New World Order was "edgy," meaning even by their competitively low standards, that alone wasn’t news. So what if they clipped the little Black girl with the big afro saying it? Portrayed it as her own disgusting, divisive, double standards? Six days later, the story trickled with sinister ease from far-right blogs to mainstream tabloids.

Self-appointed Defenders of Whiteness heard the bigots’ bugle call. Cue ya girl being name-checked by the indignation influencers.

Self-appointed Defenders of Whiteness heard the bigots’ bugle call. Cue ya girl being name-checked by the indignation influencers, the kind of human effluvium who earn their daily bread by whipping their followers into a frothy-mouthed frenzy. Disgraced comedy grandpa Jim Davidson recited a bizarre limerick on his YouTube channel which implied boys attending my gigs wanted to f*ck me; THEE Westminster WAG Sarah Vine quoted MLK in a national newspaper with one touch-typing hand while sh*t-stirring with the other; and various other alleged free-speech enthusiasts pearl-clutched for clout. All in an effort to incense people who hadn’t watched the clip, had never seen the show, and couldn’t care less about context.

Next up, my socials clogged with upstanding citizens calling me a “vile racist whore,” posting monkey emojis and swastikas, and asking: “My infant son is white. Do you want him to die?!” To the gentleman who asked, no, I don’t want your child to die, but judging by the actions of his father (anonymously sending abuse to women he doesn’t know), I do want his mother to win sole custody.

The bullies wanted me sacked, shamed, silenced. But what actually triggered the poor dears wasn’t me riffing on a borrowed phrase, it was race being discussed with maturity and without self-consciousness. The manufactured outrage was tactically deployed white noise. It was damaging because it drowned out not only my point about white supremacy harming people of every race but also many astute observations from my hilarious, eloquent colleagues. Watching the panel veer from impassioned to flippant while discussing BLM and still staying friends until the end made secret bigots cringe because they just don’t have the range.

The bullies wanted me sacked, shamed, silenced. But what actually triggered the poor dears wasn’t me riffing on a borrowed phrase, it was race being discussed with maturity and without self-consciousness.

I could wang on about why my esteemed colleague’s "kill whitey" works comedically; it’s filled with clacky consonants, so it’s very fun to say, the -ey adds a whimsical bounce, and the sentiment interrogates oppressive power structures relevant to practically every person on the planet. But it’s not my joke, it’s not the point, and bullies tend to be less fussed about what Black women actually say, more the fact that we’re speaking.

So white people, if you want to rib Caucasians, you’ve nothing to fear. Fill your boots — or, if stereotypes are to be believed, your socks and sandals. Raise that pumpkin spice latte to the sky and drink deep. Say whitey. Shout cracker. Honk if you’re honky.

More like this
Here’s Where The NHS Nurses’ Strike Currently Stands
By Sophie McEvoy
Gen Z Are Twice As Likely To Identify As Queer, According To New Data
By Sam Ramsden
Twitter Is Saying The Same Thing About Beyoncé's Renaissance World Tour
By Shahed Ezaydi
Barney Walsh Has Been Linked With This Famous Miss World Winner
By Sophie McEvoy
Get Even More From Bustle — Sign Up For The Newsletter
From hair trends to relationship advice, our daily newsletter has everything you need to sound like a person who’s on TikTok, even if you aren’t.