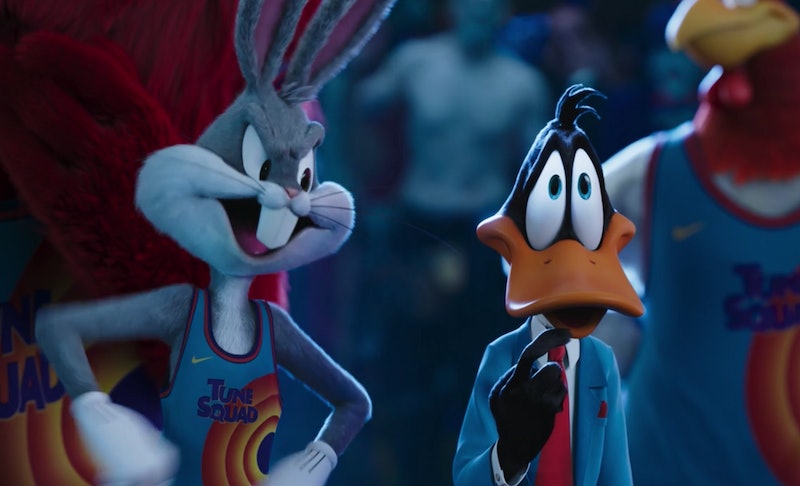 The creators and cast of Space Jam: A New Legacy made sure to let fans know early that the reboot isn’t a sequel to the original Space Jam (1996), and the new release was definitely designed to stand on its own. But it’s also pretty obvious that the filmmakers have a lot of love for the first film — because, aside from having a similar plot to the original, A New Legacy also a few references to the 1996 movie sprinkled throughout. Eagle-eyed fans who loved the Michael Jordan flick can tune in (pun intended) and find a few Easter eggs that reference the cult classic. And one of them is a hilarious fake-out. Some spoilers for Space Jam: A New Legacy ahead, so make sure to watch first.

Al G. Rhythm’s big plan is (basically) to put an animated LeBron in a bunch of Warner Bros. movies and TV shows — think King James in Game of Thrones and Harry Potter. LeBron is not enthused by the idea, saying that “athletes acting — it never goes well.” Which is not just a funny reference to James’ actual acting career but also the first Space Jam with Jordan.

When animated LeBron explains the situation — that a villain has kidnapped his kid and is forcing him to build a basketball team — Bugs looks at the camera, wiggles his eyebrows, and says, “Sounds awfully familiar!” Because, you know, these films exist in the same universe (or serververse, if you prefer). Later on, Lola Bunny says she’s “been there, done that” when it comes to playing with an NBA superstar.

The kind of cute, kind of gross Nerdlucks who steal NBA players’ talent to become the MonStars in the 1996 movie get a small cameo: they cheer for the Goon Squad as spectators and get super sad when they’re losing.

The Tune Squad practices in the old uniforms.

As they prep for the Big Game, the Tunes suit up in the classic blue-and-white uniforms from the 1996 film — then they change into the new, more colorful uniforms when they get to the stadium. But it’s still a nice throwback for who love (and maybe even bought) the original outfits.

Michael Jordan makes an appearance — but not in the way you think.

Creators teased that Michael Jordan would be in the film, but not in the way you might imagine — and boy did they deliver. In what might be the funniest moment from the film, Sylvester gets “Michael Jordan” from the stands to help the team in the middle of the game — but it’s not the basketball player, it’s Michael B. Jordan the actor, and he’s super confused. He still tosses out a “clear eyes, full hearts, can’t lose” (in reference to his Friday Night Lights role) to get the Tunes amped up before running back to his seat.

More like this
Everything To Know About 'Magic Mike’s Last Dance' Starring Channing Tatum
By Jack Irvin
The 'Love, Lizzo' Harry Styles Scene Is Just 1 Moment That Made Fans Feel Seen
By Brad Witter
How To Stream Knives Out 2: When Will Glass Onion Be On Netflix?
By Radhika Menon
Sadly, You Can’t Stream 'Top Gun: Maverick' — Yet
By Arya Roshanian and Radhika Menon
Get Even More From Bustle — Sign Up For The Newsletter