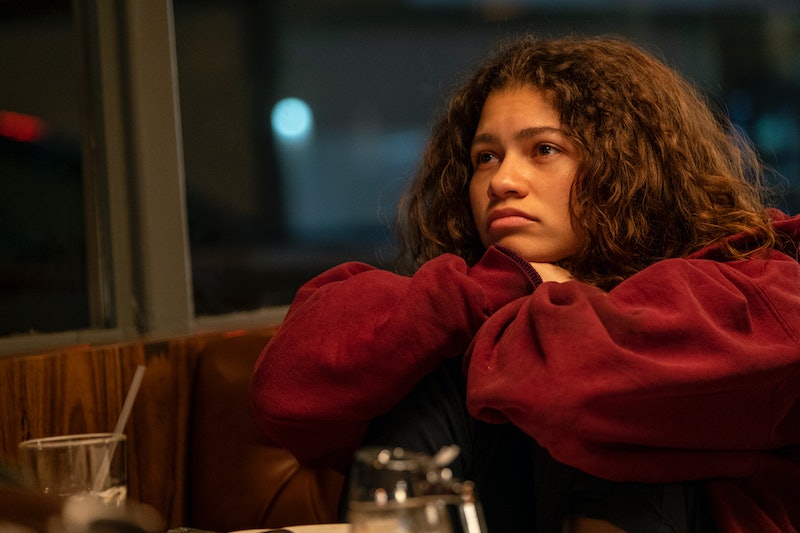 Spoilers ahead for the first Euphoria bridge episode, "Part 1: Rue." "Hopeful" isn't exactly a word you'd use to describe Euphoria. The series traffics in weighty issues like depression, abuse, and drug misuse, all explored through a haze of glitter, sex, and partying that usually makes for a dark and disorienting watch. But its first "bridge" episode — released on Dec. 3 as a holdover for the stalled second season — strips all of that back, centering on a cathartic diner chat between Rue (Zendaya) and her Narcotics Anonymous sponsor Ali (Colman Domingo). In doing so, it returns to the core of what the series set out to be: a conversation about harmful substance use.

A reflection of creator Sam Levinson's own experiences, Euphoria is, at its heart, about Rue's journey to get sober. That message has at times felt at odds with the series' frenetic, rave-like aesthetic. In Season 1, it gave Rue a way to hide from herself and the audience. But sitting at the diner with Ali — stripped from the show's usual flashiness and the rest of the ensemble cast to cut to — the only thing Rue can do is confront the truth.

It's a revealing conversation for both parties. Rue admits that she doesn't really want to get sober and that she can't help but blame Jules for her relapse, even while acknowledging that it was wrong for her to hang her emotional well-being on Jules' shoulders. Tellingly, the episode opens on Rue's fantasy of her and Jules together. She imagines that they have their own cozy apartment and that Jules is an up-and-coming fashion designer, but sees herself snorting cocaine in the bathroom. Even in her perfect fantasy, she can't imagine a world in which she's sober.

Ali pushes back on that framing, telling Rue that only sobriety can cure her unhappiness and that there's no way for her to have both a thriving relationship and "the disease of addiction." He questions whether Rue and Jules had a real relationship at all, or if she just got lost in a situationship. ("Rue fell in love with this idea of something she was never actually clear about," Zendaya says in a featurette for the episode.) It's a surprisingly frank assessment, and the whole episode works as a shift in perspective for both the audience and Rue, who's lost hope that she can ever be the person she wants to be. Ali tells Rue that while her pain is very real, it's not necessarily unique; many adults have experienced substance misuse, heartbreak, and suicidal ideation, yet they've learned to manage it and lead meaningful lives.

This is illustrated in part by Ali, who continues to try to connect with his daughters even after years of estrangement, and who continues to be Rue's emotional tether even as their conversations probably take a toll on him too. But this message plays out most clearly with the introduction of Miss Marsha, a waiter at the diner played by a woman named Marsha Gambles who the cast met while filming Euphoria Season 1 and who went through her own journey of drug misuse. Miss Marsha reveals that she's been sober for 17 years, and dating would have been the antithesis to her recovery. "I had to not be in a relationship so that I could focus on my sobriety," she tells Rue. "Because that's what I wanted, and I didn't have enough energy for both of those. Everything that's good to you ain't always good for you."

It's probably the most clear-eyed Euphoria has ever been about Rue and Jules' relationship. Euphoria may often play out like a heady fever dream, but "Part 1" re-centers both Rue and viewers on what really matters: Rue getting healthy, making it to adulthood, and finding meaningful connections that support her sobriety rather than hinder it. That seems to be too overwhelming of a prospect for Rue, who expresses doubt that she can ever achieve those things. But in the final moment, Ali tells Rue (and by extension, any younger viewers struggling with the same thing) exactly what they need to hear: "I have faith in you."