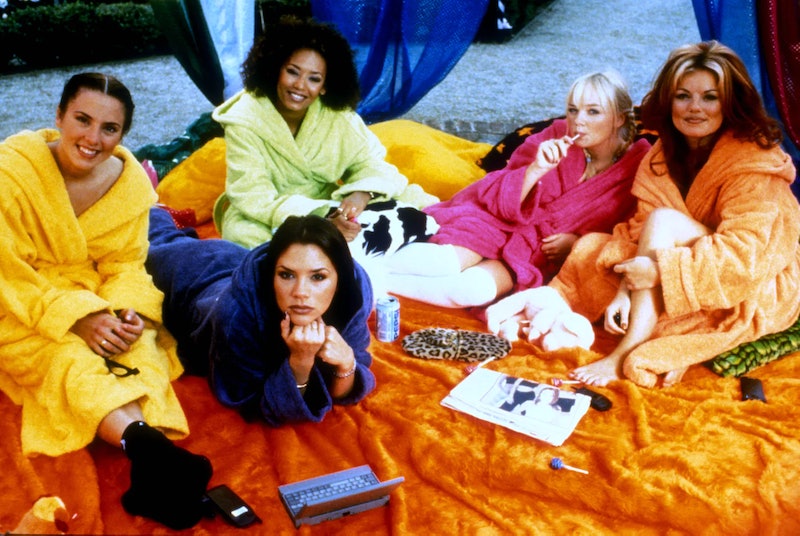 Ginger, Scary, Baby, Sporty, and Posh want to make you holler: The Spice Girls are reportedly creating a sequel to Spice World, the girl group’s zany but vital 1997 film, to mark its upcoming 25th anniversary. If it comes to fruition, the movie would mark another Spice Girls reunion — but of course, whether Posh Spice gets involved this time remains to be seen.

Geri Horner (Ginger Spice) is reportedly spearheading the project and has approached a renowned screenwriter about crafting a script, according to The Sun. Melanic C (Sporty Spice), Emma Bunton (Baby Spice), and Mel B (Scary Spice) are also tentatively onboard, with Victoria Beckham’s participation yet to be determined. “It is still in the early stages but they are talking to established names in the business, which proves they are taking a big screen comeback seriously,” a source told the outlet. Bustle reached out to the group’s representative for comment but did not receive an immediate response.

If any film in cinematic history deserves a sequel, it’s Spice World, where the Girls star as exaggerated caricatures of themselves. Their goal is to make an important concert at the Royal Albert Hall, but they face the most ridiculous obstacles on the way, including UFOs, strippers, and their pregnant best friend — all while driving the most decked-out tour bus of all time (it has a swing!). Critics didn’t take to the film in 1997, but it’s become a cult classic among fans, which is enough reason to feature it at the Academy Museum of Motion Pictures.

Notably, this isn’t the only Spice-y movie in the pipeline. In 2019, The Hollywood Reporter announced that Paramount were in the early stages of developing an animated Spice Girls film, with all five members set to be involved — yes, even Posh Spice. However, according to The Sun, the untitled animated film is apparently on hold after they departed with their manager Simon Fuller, with Horner herself currently handling managerial duties for the group.

The girls most recently reunited on a huge UK tour in 2019, which Beckham declined to join, choosing to focus on her family and fashion line. However, in January, Melanie C told Zane Lowe in an interview that she felt Beckham was slowly “coming around” to the idea of rejoining the group, saying she was involved in their 2019 tour. “That first night, when the pictures were beamed all over the world, it was hard for her,” she said. “And we’re hoping it was hard enough to bring her back ... I have to say, I feel like she’s coming around. So we’ll keep working on her.”

Whether or not she reunites with her bandmates, Beckham has nothing but fond memories with the Spice Girls. The fashion designer opened up about the group to the Breaking Beauty podcast, revealing that they even impacted one of the world’s biggest pop icons. “I met Beyoncé a few years ago, and she actually said to me, ‘It was the Spice Girls that inspired me and made me want to do what I do and made me proud to be a girl and proud to be who I am,’” Beckham recalled. “When someone like Beyoncé, who is so iconic and was such a strong woman, says that she was inspired by the Spice Girls, I think that's quite something.”

More like this
The First Look At Halle Bailey’s Ariel In ‘The Little Mermaid’ Has Twitter Hyped
By Brad Witter
Taylor Swift Wants To Direct A Movie Next — But You Might Have To Wait
By Radhika Menon
20 Years Later, Kelly Clarkson & 'American Idol' Judges Reunite For Her Hollywood Walk Of Fame Star
By Radhika Menon
The Trailer For The Whitney Houston Biopic Has Twitter Feeling Heated
By Radhika Menon
Get Even More From Bustle — Sign Up For The Newsletter