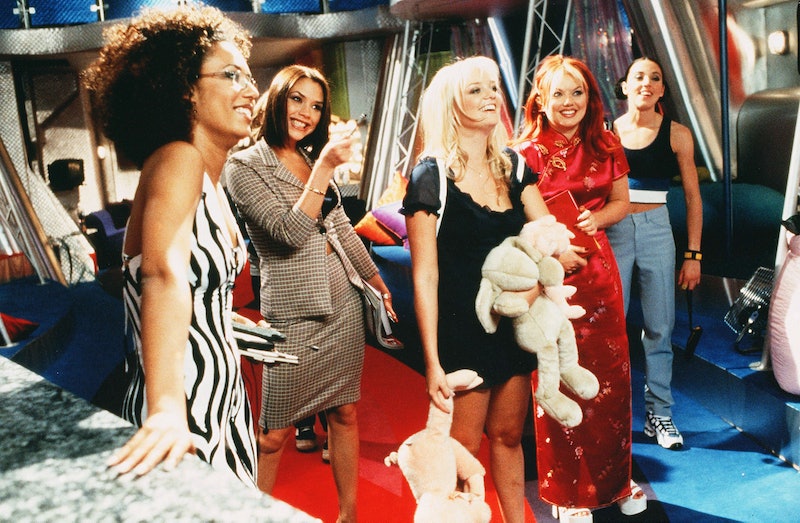 If you’re millennial and from the United Kingdom... well actually, if you’re any age from anywhere, you will understand the gravitas of the Spice Girls. Although the group were only together as a quintet from the release of Wannabe up until Geri’s departure (all in all, about 22 months), their legacy lives on decades later. Even now, in 2021, we still want to talk about their music, their fashion, and, of course, their iconic 1997 movie Spice World.

There really is no piece of pop culture that embodies the quirky side of "Cool Britannia" quite like Spice World. Following Sporty Spice, Scary Spice, Posh Spice, Ginger Spice, and Baby Spice on a tour bus around London, Spice World takes us on a bizarre, cameo-filled adventure ahead of their concert at the Royal Albert Hall.

Although film critics didn’t exactly think it was Oscar-worthy, it was a hit, making $151 million at the box office, and it lives on in the minds of fans rent-free as a cult classic film.

Well, with U.K. lockdown pressing on and the winter weather bringing everyone down, I decided now was a good time to rewatch Spice World, a film I hadn’t seen since I was a child dancing around to Who Do You Think You Are, to see if it still holds up almost 25 years later. Here's what I found.

Honestly, I thought I was having some sort of fever dream watching Spice World. I felt like I had tuned into a sequel without watching the first film. In fact, I rewound a couple of times to make sure I hadn’t missed something because the Spice Girls movie is pure chaos, little context, and it barely makes any sense. There are Italian strippers, UFO landings, random flashback (and flash-forward) scenes, and intertwining plots — but TBH, that makes it so much fun to watch.

Move over, Phoebe Waller-Bridge: Spice World had talking to the camera and breaking the fourth wall decades before Fleabag.

Sorry to go all technical here, but this film is smart! It’s consciously aware it's fiction — the film knows it’s a film. They’re writing the script as it happens — big Hollywood writers want to cast the Spice Girls in a ridiculous blockbuster, and then it happens? By the rolling credits, the girls are talking to the audience and the supporting actors are all discussing their roles in the film.

By playing caricatures of their own personas, is this all just one big critique about the ridiculous hoops pop stars jump through in order to be successful and the lack of agency they have as the price of fame? Maybe I'm reading too much into it. Maybe not...

I always thought of Posh Spice as the quiet one that kind of faded into the background, but oh how wrong I was. She’s honestly the funniest one in the film. From the one-liners to falling in the Thames to her 'posh' accent, VB is just a pleasure to watch. And, sorry, but the fact that she's since become a world-renowned fashion designer is everything.

4. The Girls Are Still Relatable

The Spice Girls are still very relatable in 2021, bickering about star signs, chewing an intimidated man’s ear off about feminism at a party, and trying to find time to prioritise friends.

5. Mel B Is The Real Fashion Queen

The tour bus is like a Tardis. I mean, there's a swing in there! I don’t understand... are we just supposed to... let that go?

7. The Bit With The Vatican Is So Funny

After sounding off about girl power, Geri is asked, "But you do like boys, don’t you?" by a journalist. She replies, "Is the Pope a Catholic?" Next thing you know, there’s a media storm about how the Spice Girls have cast doubt on the religious conviction of the Pope, and the Vatican rebuking the claims. Comedy gold.

8. Did Anyone Else Miss That Meatloaf Was Their Tour Bus Driver?

I didn’t even clock it until he made an "I’ll Do Anything for Love But I Won’t Do That" joke.

9. How The Hell Did They Fit In So Many Cameos?

10. Can We Talk About The Terrifying Bald Man From Our Collective Childhood Nightmares?

So, I subconsciously avoided this film because I remember being horrified by it as a child, but I couldn’t put my finger on why. The man of my childhood nightmares (who I’d somehow reimagined as an amalgamation of The Demon Headmaster and the baddy from Who Framed Roger Rabbit) is real! But he’s not a boogie man — he’s a paparazzo! Which I guess for the Spice Girls and famous people is one and the same. This man literally climbs out their toilet to take photos of them in their sleep. It’s actually still quite horrific.

11. There’s A Hidden Message In Here About Privacy, Fame, And Media Hounding

At the start of the film, their manager makes a "no upskirting" comment to one of the paparazzi, which feels pretty prescient. And a lot of the film is all about them running away from the press, who are determined to try and catch the girls doing something humiliating. It's an illustration of what was happening in media at the time, but almost 25 years on, have things really changed? Depressing, I know.

There’s a scene when they’re all their future selves with kids, and Mel B is in a West African Kente cloth dashiki number (her heritage is British and Caribbean). And then there's the moment when they are playing dress-up. While the other girls take on roles like Marilyn Monroe and Wonder Woman, Mel B is dressed as a generic "reggae musician" with dreadlocks and, later, some sort of "tribal woman" with a big stick and face markings... IDK, it felt odd.

13. For A Movie About Girl Power, There Are Barely Any Women In It

This film passes the Bechdel test with flying colours thanks to all the scenes with the five bandmates. But! Outside of Geri, Mel B, Mel C, Emma, and Victoria, I counted three women with actual roles in this movie. Three! All the cameos are basically men, minus Jennifer Saunders. Kind of disappointing.

14. The Concept Of Baby Spice Is Actually Kind Of Weird...

As an adult listening to her lines and baby voice, it just kind of gave me the heebie-jeebies.

15. It All Made Me Feel So Nostalgic

Seeing London in the '90s took me back to my childhood. The old versions of the buses, the fashion, the slightly younger celeb faces. Wow, what a trip down memory lane.