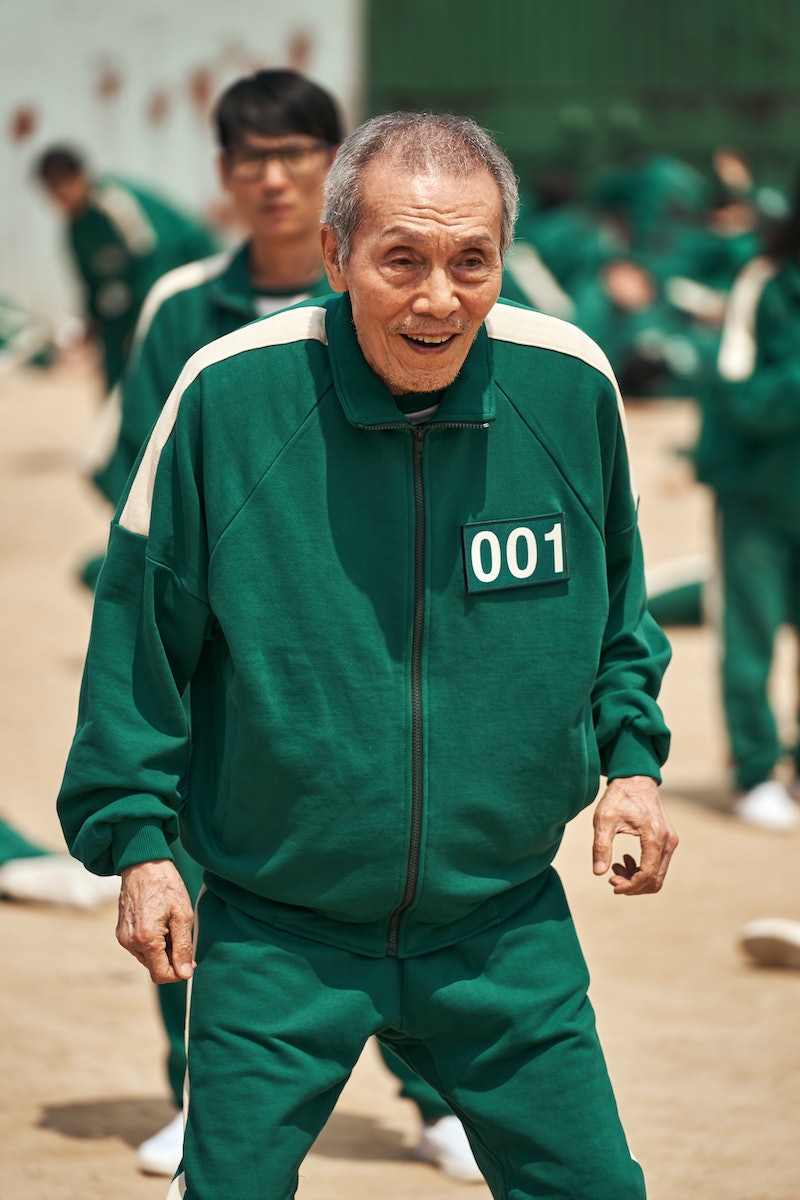 If you consider emotional roller coasters fun, then Squid Game should be number one on your watchlist. Well on its way to becoming Netflix’s biggest show globally, the Korean survival series is rife with shocks, twists, and character shakeups that even the shrewdest viewers wouldn’t see coming. Lovable people turn bad, pesky annoying characters make you root for them in the end, and then there are those who break your heart only to later turn it stone-cold. There’s one in particular whose hidden identity becomes the most shocking revelation of the season: Player 001’s Oh Il-nam.

Played by Oh Yeong-su, Il-nam competes with 455 debt-ridden players in deadly playground games for a chance at taking home 45.6 billion won (or $38 million). The frail old man with a brain tumor develops a close friendship with Lee Jung-jae’s Seong Gi-hun, the only one who includes him as Il-nam finds it difficult to get picked in teams. He’s no ordinary player, though, and is later revealed as the mastermind behind the twisted games. Here are the clues that were there all along and pointed to Oh Il-nam’s true identity.

His Name And Number

The fact that he’s 001, the first hand-picked player in the games, should’ve been the first clue. His name, Il-nam, which he reveals in Episode 6, should’ve been another. “Il” or “일” translates to “sun” in Korean, but there’s another more fitting translation. “Il” also means “one” or “first.” “Nam” or “남,” meanwhile, translates to “man” or “boy.” So his name literally translates to “first man.” He’s definitely the pioneer.

The Doll Didn’t Scan Him

The first game they ever play in the series is Red Light, Green Light, or Mugunghwa Kkochi Pieot Seumnida (The Mugunghwa Flower Has Blossomed). If the jumbo killer robot turns to catch players moving, they’re shot dead. The doll can be seen scanning players with a green overlay each round to detect movement, but when her eyes flicker over Il-nam, the green layer isn’t there. She wasn’t evaluating him. He was always safe. Another giveaway? He was way too happy running toward the finish line while others died all around him.

The Chance Encounter With Gi-Hun

By the end of the first episode, when players opt out of the game, Il-nam votes last, probably because he actually has the final say. He decides to end them, which could be because the game’s philosophy is built on voluntary enlistment. However, in the following episode, Il-nam randomly bumps into Gi-hun outside of a convenience store and ends up convincing him to rejoin the games.

His Choice Of Shape

When Gi-hun offers to swap shapes with Player 001 before the honeycomb challenge in Episode 3, he refuses and sticks to a star because he already knows the game and knows the easy choice.

During the tug-of-war competition, Il-nam leads his team to victory with an extremely detailed strategy on how to win. He boasts that he’s played many of these games in his youth, but it seems like he knew about the tug-of-war challenge before everyone else and came prepared. Also, when he looks for someone to join their team before the game is revealed and fails, he doesn’t seem so worried about not filling the slot. He had a strategy, after all.

His expertise at pulling rope isn’t the only clue in Episode 4. An eagle-eyed TikTok user noticed that everyone else in Il-nam’s tug-of-war team had locks on their handcuffs while Il-nam’s didn’t. Maybe it’s his backup should his teammates all fall — literally — to their demise.

Or lack thereof. While undercover cop Hwang Jun-ho rummages through the meticulously organized files of the games dating back many decades, he flips through the players of the current season. One TikTok user pointed out in the comments of this post that when Jun-ho opens the binder, the first page shows Player 002’s file, suggesting that Il-nam didn’t have a file and therefore wasn’t a regular player.

His Connection To The Front Man

During Episode 4, it’s revealed that the organizers ration the food on purpose to instigate a brawl. When the fight breaks out in the dormitory, Il-nam climbs up the bunk beds and pleads for it to stop while the Front Man watches. It seems like he’s talking directly to the Front Man when he yells, “I’m so scared” and “Stop it!” Immediately after, the Front Man, who listens to no one, orders his men to turn the lights back on.

His Approach To Finding A Partner

TikTok user Dana Wang also noticed more hints that Il-nam knew how to rig the rules. While other contestants scramble to partner up, Il-nam just sits in a corner, even offering Gi-hun his jacket to help Gi-hun look tougher to a potential partner, without bothering to look for one himself. Wang points out that it’s likely because he already knew that he wouldn’t die if he didn’t end up in a pair.

When players pair up in Episode 6 only to be told that they’re competing against each other in a game of marbles, they’re led to a replica of a South Korean neighborhood. Il-nam, who during the episode seems like he’s merely rambling from dementia, tells Gi-hun that he once lived in a neighborhood just like it. Later on, he even enters a replica of one home, saying, “I used to live in this house,” before recounting which spots felt familiar. Toward the end of the game, it’s revealed that his faculties were working just fine. Since he’s the creator, he probably designed this backdrop after his own neighborhood and house.

In that same episode, Ji-yeong, a young woman, tells Kang Sae-byeok that marbles were typically played by boomers when they were young. Il-nam, who is the eldest among the players and also the lone boomer, says he played marbles as a kid. His fondness for the game could be why it’s included and serve as another hint at his real identity.

While the other players who lost during the marbles round are shot onscreen, the gunshot that supposedly kills Il-nam is fired in the background. There’s no proof that he died as his body isn’t shown in the following episode, either, unlike Abdul Ali’s and the others’ bloodied remains.

When the boss finally appears in a crisp suit by Episode 7, he’s shown wearing a gilded animal mask. Though viewers don’t get to see his face, they do see his hands as he sets the mask on the table — and they are old man’s hands.

Participants stomach the daily slaughters and play to the death themselves because they all actually need the cash — they’re all buried in debt. A clip played by the games’ organizers early on in the series even shows just how much some contestants owe. The only person who seems to be in a different situation is, you guessed it, Il-nam, who only joined the games because he has a brain tumor — with no mentions of any need for cash. So, why was he there?

This article was originally published on Oct. 7, 2021