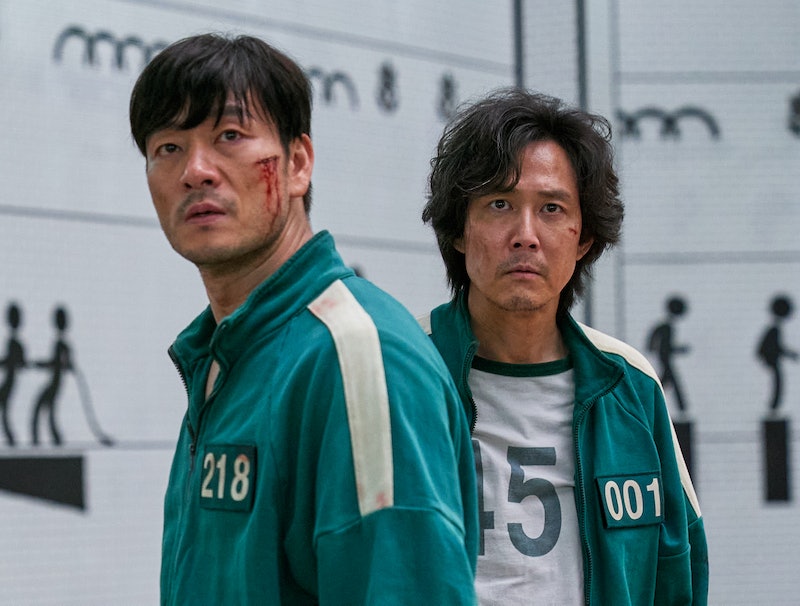 In Netflix’s dystopian thriller Squid Game, which soon might surpass Bridgerton as the streaming platform’s most-popular series ever globally, debt-ridden people are offered the chance to join a secret contest to win a large sum of money. The catch? Spoiler: If they lose, they die. Over the course of nine heart-pounding episodes, contestants in the Korean drama compete in six deadly playground games for a shot at taking home 45.6 billion won (roughly $38.6 million).

Since its release on Sept. 17, the series has remained at No. 1 on Netflix’s Top 10 Today rankings in the United States as well as in other countries. A major part of the show’s draw is discovering alongside the players what each round’s challenge is and what horrors each game entails. It’s difficult to peel your eyes away from the games, but it appears there’s one place viewers and the players should’ve looked all along — the walls behind the beds in the bunker.

A shrewd TikTok user noticed that hints to survive the deadly games were inside the bunker ever since they woke up in it in Episode 1. “THE CLUES WAS IN FRONT OF THEM ALL ALONG,” TikTok user @lucy.what1 wrote on her short clip. The video zooms in on the empty bunker, from a scene later in the series when the number of players had dwindled, clearly showing wall paintings that depict all six games played throughout the season.

It’s quite understandable that viewers missed that glaring clue. In the beginning, the bunker’s walls are blocked by 456 stacked beds where all the contestants sleep. But as the series progresses and more games are played, more contestants inevitably die. The bunker beds of the fallen players are then taken out, slowly clearing the view of the bedecked walls.

Another fan noticed the same easter egg everyone missed and shared the discovery on Twitter with a side-by-side picture of the bunker with and without the beds. All six games are on there.

Some skeptics didn’t believe that clues were visible to the players the entire time. “I’m sure they put them on the wall after the game,” one commented on lucy.what1’s TikTok. She addressed the comment in a new video, showing a photo of the empty bed frames that clearly reveal the wall art.

Since posting her wall art TikToks, she’s posted even more theories about the series that will shock viewers into a rewatch. Her theory on the significance of the envelope color Lee Jung-jae’s character picks at the beginning of Episode 1? Mindblowing.

A rewatch of Episode 1 proves that the clues were under all our noses since the beginning. In the first wide shot of their sleeping place, there’s a barely noticeable outline of the artwork hidden behind layers of beds. By the fourth episode, with a good chunk of the contests already deceased, the stick figure murals start to peek out and yet the players still pay them no attention.

More like this
Chrishell Stause Claims The PCAs Stopped Her From Bringing Her Partner G Flip
By Jake Viswanath
17 Photos Of The 'Wednesday' Cast Vs. The 1991 'Addams Family' Cast
By Grace Wehniainen
The First Trailer For 'That '90s Show' Includes So Many Nods To The Original Series
By Jack Irvin, Alyssa Lapid and Grace Wehniainen
Elizabeth Debicki On Her Approach To The Most Debated Scene From 'The Crown'
By Grace Wehniainen
Get Even More From Bustle — Sign Up For The Newsletter