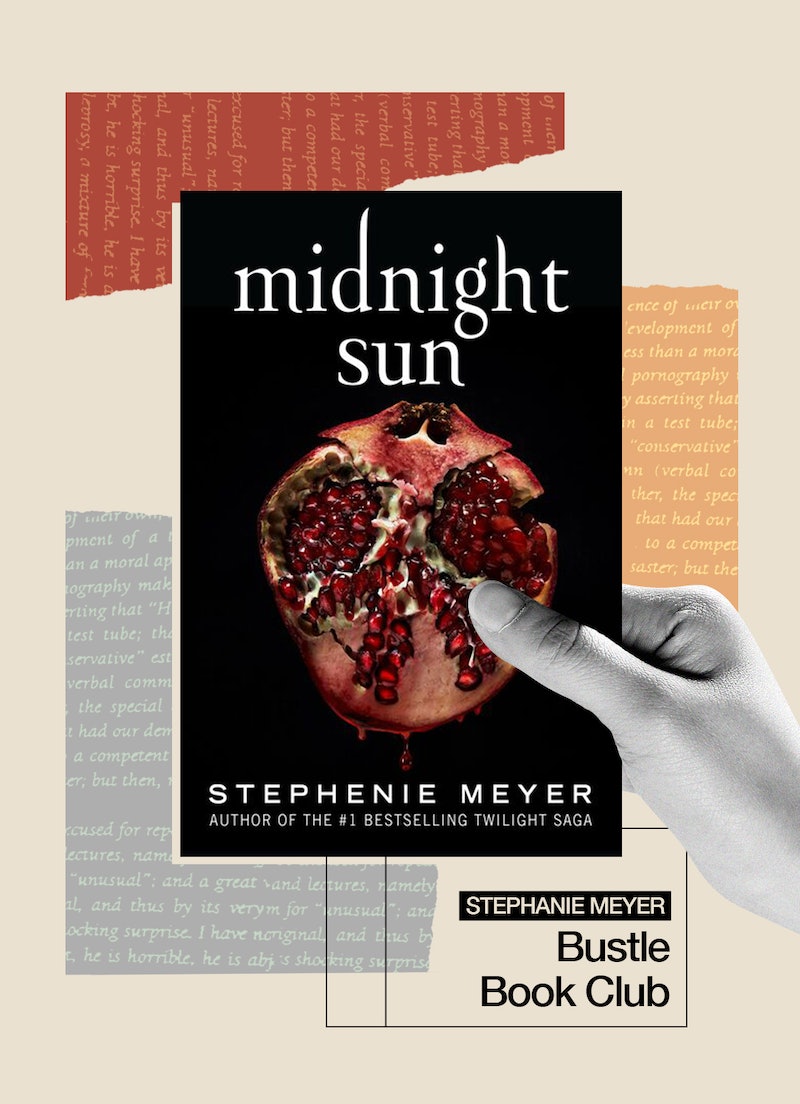 Twilight evangelicals have Stephenie Meyer’s mom to thank for the long-awaited Twilight companion novel Midnight Sun finally seeing the light of day. Though Meyer had all but given up on the novel — which retells the events of the series from Edward’s perspective — after excerpts were leaked in 2008, the author was compelled to revisit her writing years later when her mother drove a hard bargain. “She told me that if I just wrote the book through [Twilight’s famous meadow scene], that was all she needed and she’d leave me alone,” Meyer tells Bustle. “I [wrote up to that scene for her] for Mother’s Day because there was nothing else I could get her. She didn’t want anything except for the book.” Though Meyer wasn’t sure there would still be an audience for the novel over a decade after the publication of Twilight, revisiting it as a creative exercise freed up her mind to finish the long-abandoned manuscript.

When Meyer revealed in May that the latest installment of her generation-defining vampire romance series would finally hit shelves on Aug. 4, she learned that not only were fans still interested in the Twilight universe — they were so rabid for it that the announcement broke the internet. (Or Meyer’s website, at least.) “I thought I’d missed my window, so to have people super interested in it even after I waited a million years [to release the book] was surprising and exciting,” she says.

While fans are just as eager to read the book as they were in 2008, the world is a very different place than it was over a decade ago. The #MeToo movement ignited a worldwide reckoning with power abuses and imbalanced gender dynamics. And cast in this new light, many have criticized what they consider Edward’s controlling behavior towards Bella. Meyer believes Midnight Sun will offer a counterpoint to that narrative. “I don't know if anyone has ever realized how incredibly guilty he feels all the time, how he feels like he can destroy her with a breath,” she says. “So that I think comes out a lot in how he is around Bella. He's an extremely anxious person and you don't get that from the other side where he seems so suave. But when you're in his head, it's a whole different experience.”

Ahead of Midnight Sun’s release, Bustle spoke with Meyer about Edward Scissorhands, her love of Post-it Notes, and her latest marathon watch.

On her go-to writing snack:

I have a drawer full of gum because I chew gum while I write — almost like someone lighting a cigarette from the cigarette they just had lit. It's just a constant trading out the gum. I like the fruit flavors but I have four different kinds of mint next to me right now. And sometimes I’ll get the old kind that tastes like cloves. That strange flavor doesn’t last but two seconds, but man, I love it.

On her note-taking process:

When I come up with ideas that I can't get to when I'm in the middle of writing, I'll have Post-it Notes. [They’ll say], "Remember to have Edward do this in this section." I have Post-its littering my desk, on my monitor, and on my keyboard with all the things I need to go back to and deal with.

On the soundtracks that fuel her love scenes:

With Midnight Sun, I [listened to] the Edward Scissorhands score. Then this is cheesy, but I was also listening to some of the Breaking Dawn soundtrack because the wedding music was so romantic. [Because in Midnight Sun] Edward was already aware, before the book was half over, that this was the love of his life and there wasn't going to be another one. He knows that this is it for him.

[When I’m writing] I get very, very obsessive and I don't leave my computer much. I don't want to cook. I don't want to eat. I just want to sit there and be in the world. But when I finish a book, I’ll let myself watch a show. With Midnight Sun, the thing I finally indulged in was Downton Abbey — which shows how far behind I am. Of course I loved it, but I'd literally never seen it. Because I hadn't had time to sit and focus.

On being a bit of a mess:

My office used to be this giant bar in the middle of the living room. Now it’s just a quarter circle with my big granite desk that’s covered in trash, because I leave notes for myself and I pile up things that I have to do. Once a year I'll clean everything out and it's like, "Oh, look how nice and peaceful this is. I should keep it like this." My husband is very tidy and I've gotten a lot better since we got married, but my office is kind of the one place where the old me is there.

More like this
We’ve Entered The Hot Boy Reader Era
By Samantha Leach
Netflix Shut Down 'Bridgerton' S3 Rumours About A “Very Dark” Storyline
By Bustle
Jessica Simpson On The Time She Was Pursued By A Backstreet Boy & An *NSYNC Member
By The Editors
Meghan Trainor & Daryl Sabara Are Expecting Their Second Baby
By Jake Viswanath
Get Even More From Bustle — Sign Up For The Newsletter
From hair trends to relationship advice, our daily newsletter has everything you need to sound like a person who’s on TikTok, even if you aren’t.