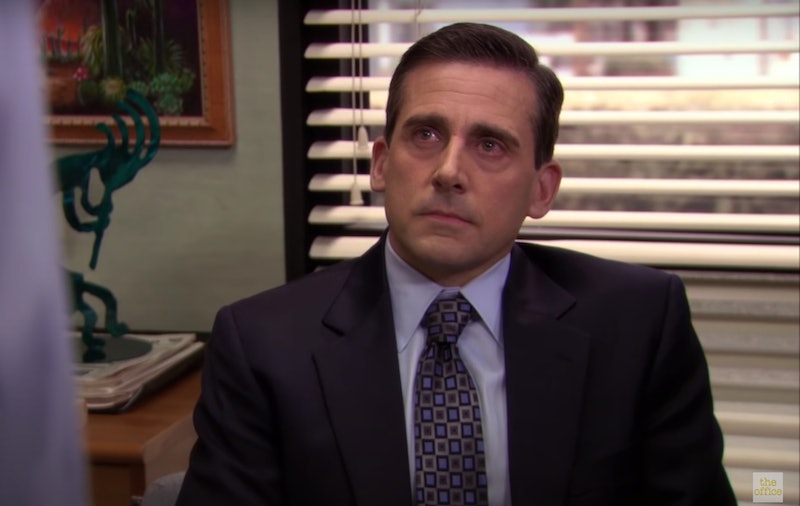 Michael Scott’s departure from The Office was not just emotional torture for viewers, it was pretty rough for actor Steve Carell, too. And here’s a revelation that will leave fans sobbing to James Blunt’s “Goodbye My Lover”: Steve Carell actually pitched Michael Scott’s final Office storyline featured in Season 7, Episode 22, titled “Goodbye, Michael.” Carell reflected on his last episode — one he said was “fraught with emotion” and “joy and sadness and nostalgia” — on the latest episode of Brian Baumgartner’s podcast An Oral History of The Office, released on Aug. 25.

According to his new interview, Carell knew exactly how he wanted his final storyline to conclude and even spoke to creator Greg Daniels about it months beforehand. “I talked to Greg about how I wanted Michael to go out, like what I thought the sort of final arc would be, and the idea that I pitched was, obviously, he and Holly would be together,” Carell explained. “But I said specifically on his last day, I thought that there should be a party being planned, but that he should basically trick people into thinking he was leaving the next day.” Carell thought this storyline would be the most “elegant representation” of Michael’s growth as a human being. “Michael lives to be celebrated. You think that's all he wants," Carell said. "He wants to be the center of attention. He wants pats on the back."

Carell continued, “He wants people to think he's funny and charming and all of those things.” The fact that Michael would simply “walk away from his big tribute — his big send-off — and be able to in a very personal way say goodbye to each character,” that, to Carell, felt right. He also opened up about his personal goodbyes to the cast and crew, calling them “emotional torture.”

John Krasinski, Jenna Fischer, Rainn Wilson, Angela Kinsey, and more also appeared on the podcast episode to reflect on Carell’s emotional last day. Kinsey recalled Carell musing that Michael’s story had been told to the fullest extent. “I remember one of the things him saying to me is, ‘I really just feel like Michael's story has played out. I really feel like I've done everything I can as Michael. Like, I like where Michael's at, you know?’” Kinsey said. “And I really respected that.”

The emotional walk down memory lane comes after The Office celebrated its 15th anniversary in March. Carell similarly reunited with Krasinski on his web series Some Good News that month to celebrate the milestone and reflect on the show’s resonation today. “It’s such a happy surprise that after all these years people are still tuning in and finding it today,” Carell said. “It’s pretty cool.” Ah. Even with his emotional departure, Michael Scott continues to live on longer than any other TV boss in the pop culture zeitgeist. That’s what she said.

More like this
The Office Lego Set Includes All Your Favourite Dunder Mifflin Characters
By Sam Ramsden
Gabby & Rachel Reveal How That 'Bachelorette' Rose Ceremony Twist Happened
By Grace Wehniainen
Who Plays Trent In 'Never Have I Ever'? Benjamin Norris Calls His Character A “Himbo Stoner”
By Grace Wehniainen and Radhika Menon
Netflix Reveals First Look At Wednesday In The 'Addams Family' Spinoff Series
By Bustle Editors
Get Even More From Bustle — Sign Up For The Newsletter